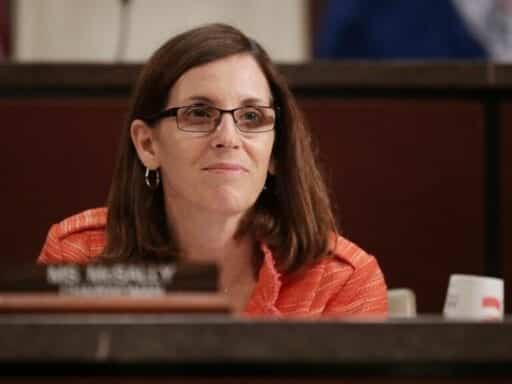 Others in the GOP have sidestepped the issue.

PHOENIX, Arizona — Rep. Martha McSally, the winner of Arizona’s Republican primary for Senate, is doing something few women in the GOP have done this cycle: She’s putting gender at the forefront of her campaign.

It’s a move that Republican women have by and large shied away from — likely due to concerns about being too closely affiliated with identity politics. This doesn’t seem to be the case for McSally — the first female fighter pilot to fly in combat, who’s up against Democrat Kyrsten Sinema, another woman — in the general election this fall.

McSally first highlighted gender in her campaign announcement, and has continued to focus on it in the course of her Senate run. “I’m a fighter pilot and I talk like one,” she says in her announcement video. “That’s why I told Washington Republicans to grow a pair of ovaries and get the job done.”

“She’s broken so many barriers in her career,” says Lisa Askey, the president of the Chandler Republican Women, noting that “there was such prejudice against her and she’s made great strides.”

Since she joined the race, McSally has made her groundbreaking service in the Air Force a cornerstone of her campaign and debuted a Women’s Coalition made up of Arizona women leaders including former Gov. Jan Brewer and former Secretary of State Betsey Bayless. (Some of the women who support her have taken to offering a pithy nod to her military service and referring to themselves as her “Wing Women.”)

Her approach to gender is in stark contrast to Marsha Blackburn and Diane Black, two Congress members who ran in the Tennessee Senate and governor’s primaries while skirting the issue.

McSally’s emphasis on gender could offer key advantages in this race. One of the main demographics that she’ll have to win over in November is women, a group that makes up 52 percent of Arizona’s registered voters. A growing proportion of women are also identifying as independents who are increasingly looking to be the deciding factor in the upcoming Senate race.

With two women going up against one another — gender is no longer a liability.

For many McSally supporters, her mentions of gender don’t read so much as an overt effort to draw attention to it as they do a straightforward way to describe her professional record, and highlight her qualifications.

McSally has said she was shocked by the way the Air Force was set up when she first enrolled in the Academy after graduating high school. “I find out when I get to the Academy that it’s against the law for women to be fighter pilots, and I’m like, What? I’m going through the same training as you. I’m kicking a lot of these guys’ asses, and somehow, just because I have ovaries, I can’t be a fighter pilot?” she told Elle in a 2016 interview. “That doesn’t even make sense to me.”

In 1995, McSally became the first female fighter pilot to serve in combat, while flying in a mission in Iraq. Less than a decade later, she went on to become the first female commander of a fighter squadron. While overseas in Saudi Arabia, McSally also challenged a rule that required servicewomen to wear traditional abayas — long-sleeve floor-length dresses — when they traveled off-base. She ultimately sued then-Secretary of Defense Donald Rumsfeld over the requirement, noting that servicemen were not required to wear the formal dress of their host country in the same circumstances — and secured a change in policy.

During her time in the House, the two-term Congress member has continued to champion gender equality, establishing a working group to examine disparities in the workplace around pay and confronting the House’s stringent dress code.

“From a personal standpoint, she’s a highly accomplished woman,” says Scottsdale Mayor Jim Lane, an Arizona official who has endorsed McSally. “I don’t know that there’s an overemphasis on [gender].” In her approach toward gender, McSally seems to be doing something that’s seen more frequently on the Democratic side: simply noting how it informs her life experience and perspective.

The Republican party has long been criticized for its lethargic approach to promoting women among its ranks, and this year the GOP could see the number of Republican women in the House go down even as Democrats experience an unprecedented slew of wins among women candidates.

For some GOP women, there’s also a concern that being too outspoken about issues like gender equality could associate them with identity politics, something the party has actively strove to distance itself from. As Tennessee Republican Party communications director Candice Dawkins said earlier this year, “We don’t need to highlight our otherness. … The Republican Party has a track record, and that’s what we’re running on.”

Multiple Arizona Republicans noted that McSally is just the latest in a series of female Republicans that state voters have backed. “I know that people will look at our party and say we suppress women,” Askey says. “And I find it laughable here in Arizona.”

As a state, Arizona has a long pattern of promoting women in public office. As the New York Times’s Susan Chira writes, Arizonans have consistently elected women for key state and local positions, even though the Senate seat has remained elusive.

Arizona, long an emblem of conservatism, also has a history of shattering stereotypes about women in power. The state leads the nation in electing women as governor — two Democrats and two Republicans — and ties with Vermont for the highest proportion of women in legislatures at 40 percent.

Perhaps most interestingly, because the final election will consist of two women facing off for the seat, this dynamic offers both candidates the freedom to discuss gender on both sides of the aisle in a way that’s different from other primaries.

“We have strong women here. People laugh and say it’s the wild west. We have great internal support,” Askey says. “I think because we’ve always had so many strong women, it’s been part of the landscape.”

McSally has plenty of political reasons to emphasize gender

There are strategic reasons for McSally to emphasize gender equality, an issue that could be key for appealing to women and independent voters, especially those who are turned off by Trump’s allegations of sexual misconduct and rhetoric toward women. According to a July analysis of just over 70 voters by Phoenix-based polling firm, OH Predictive Insights, women who identified as independents were more likely to back Sinema by a large margin.

A January Washington Post-ABC News poll found that women and independent voters were flocking to the Democratic options in congressional races.

In a head-to-head race against Sinema, gender is seen as a likely asset not only when it comes to voter support, but also for GOP optics. “The [Republican Party] has a gender gap,” says Larry Sabato, the head of the University of Virginia’s Center for Politics. “By nominating McSally, they’re hoping to close the gap a bit.”

Regardless of whether McSally or Sinema win in November, the election is also due to mark a major milestone for the state and that’s worth noting, many Arizona Republicans say.

“It’s an issue in the race for a couple of reasons. It’s pretty clear that whoever gets out of the primary, it’s going to be a woman,” says McSally supporter Kim Owens, a public relations professional in Phoenix. “This is a first in Arizona, we’ve never had a female Senator. That’s in and of itself, something of note.”

“You’re seeing McSally talk about her gender because it’s going to be historic,” says Derrik Rochwalik, chair of the Maricopa County Young Republicans.

And even if she doesn’t end up winning, McSally’s approach to gender has already made a dent in existing Republican norms.

Why firing squads are making a comeback in 21st-century America
Vox Sentences: Trump throws census plans out the window
Trump walked (briefly) in front of the queen, and apparently that’s not allowed
The controversy over the Air Force’s stays at a Trump hotel, explained
Umbrella Academy season 2’s ending, explained
The White House is reportedly limiting the FBI’s Kavanaugh investigation. Trump says that’s not the ...