Marvel’s Black Panther 2 will be released in 2022 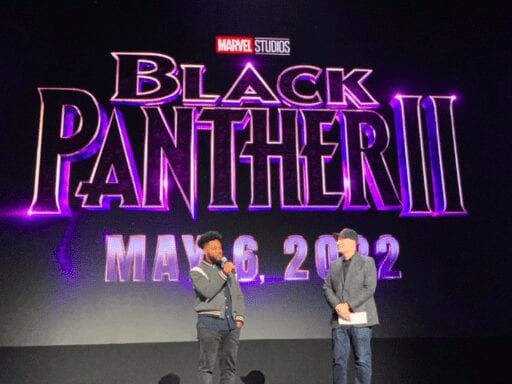 It’s the return of the king (of Wakanda).

At Disney’s D23 Expo on Saturday, August 24, Marvel officially announced that Black Panther 2 will arrive in theaters on May 6, 2022. Director Ryan Coogler will return to the franchise. The first Black Panther film was a massive hit, and biggest solo superhero movie for Marvel in history.

Curiously, Marvel made no mention of other movies during its D23 session — even though the third Guardians of the Galaxy film has director James Gunn back on its roster, and a Captain Marvel sequel seems like a no-brainer. There was also no mention of Spider-Man’s current standing in the MCU during Marvel’s presentation.

Marvel did announce three new TV shows — Ms. Marvel, She-Hulk, and Moon Knight — that will air on its Disney+ streaming service, scheduled to debut in November. The studio also gave D23 attendees a closer look at story concepts for other upcoming shows — The Falcon & Winter Soldier, Wandavision, Loki, and the animated What If series.

And here’s what Marvel has scheduled for Disney+:

These new details give us a clearer picture of what to expect from Marvel in a post-Endgame world: an expansion of the MCU beyond the original Avengers and the return of Black Panther — who looks to be one of Marvel’s new cornerstone heroes. Ms. Marvel, Marvel announced, will also appear in some of its future movies.

There’s also reason to believe that Marvel has a couple more movies up its sleeve. Back in 2014, Marvel announced a five-year film slate up through 2019. So far we’re only out until 2022, leaving room for the return of Carol Danvers, the third Guardians of the Galaxy movie, perhaps some merry mutants, and even Spider-Man film too, if Sony and Disney can get along.

Biden’s building the most diverse Cabinet ever — but many Democrats say he’s doing it wrong
Trump somehow still doesn’t understand NATO
Photos: kids in 123 countries went on strike to protect the climate
The difference between the DNC and RNC, in one tweet
This Republican senator’s radical new plan for the FTC kind of makes sense
Sen. John Cornyn has fended off Democrat MJ Hegar to win reelection in Texas