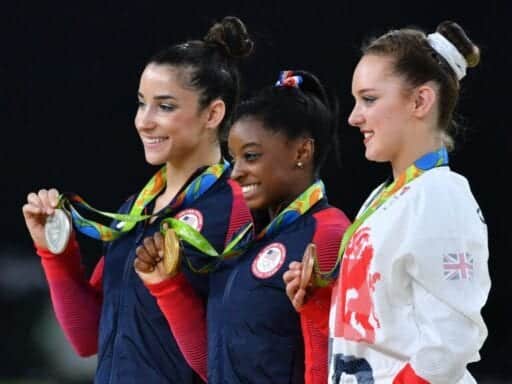 Bono lasted just four days as USA Gymnastics continues to reel from its handling of the Nassar scandal.

After four days on the job, interim USA Gymnastics president Mary Bono is out.

USA Gymnastics had hired Bono as its interim president on the heels of one of the worst sexual abuse crises in American sports history. But Bono was also a senior vice president at the organization consulted to help cover up for a serial child abuser — former USA Gymnastics and Michigan State University team doctor Larry Nassar.

And she tweeted critically about the Nike campaign featuring Colin Kaepernick and seemed to embrace an anti-Nike boycott, despite the fact that the sport’s biggest — and best — gymnast, Simone Biles, is a Nike athlete.

Now Bono is out after less than a week leading USA Gymnastics. In a statement on Tuesday, Bono resigned from the presidency and blamed her exit on “personal attacks that, left undefended, would have made my leading USAG a liability for the organization.” She added that she can “proudly stand behind” her work with Faegre Baker Daniels Consulting, a firm USAG used to help protect Larry Nassar in 2015 and 2016 as allegations against him began to mount.

Bono’s resignation doesn’t change the underlying problem: Time and again, USA Gymnastics has ignored the voices of its own athletes in an effort at self-preservation.

Even back in 2016, more than a year before the Nassar story went public nationally and Nassar himself was charged with criminal sexual conduct, USA Gymnastics’ investigators told three-time Olympic gold medalist Aly Raisman to “remember that there are risks in sharing information at this point” and former USA Gymnastics president Steve Penny told Raisman to keep “quiet and confidential and” include “very few people in the loop” regarding what Nassar had done to her.

By hiring Mary Bono, whose previous employer helped to cover up Nassar’s crimes — contributing to the continued abuse of more than a dozen of Nassar’s victims at Michigan State and at least one USA Gymnastics member gym — USA Gymnastics once again prioritized its own self-interest over the victims of sexual abuse.

Even after more than 150 women testified about what Nassar did to them and their loved ones, even after threats of decertification by the United States Olympic Committee forced the resignations of US Gymnastics’ entire board, USA Gymnastics still put itself ahead of its athletes.

Bono’s connections to a cover-up

Mary Bono, a former Republican US representative who served in Congress for 15 years from 1998 to 2013, was made interim president and chief executive of USA Gymnastics on October 12.

What USA Gymnastics didn’t mention was that USA Gymnastics worked with a Faegre Baker Daniels employee named Scott D. Himsel to help the organization concoct cover stories to explain why Larry Nassar was not present at major competitions that took place in 2015 and 2016 in the run-up to the 2016 Olympics in Rio, including saying that Nassar was ill and that he was focusing on his “private practice.”

By doing so, USA Gymnastics helped Nassar not only avoid public scrutiny, but allowed him to keep working at USA Gymnastics member gyms and at Michigan State University, where he continued to molest young athletes. USA Gymnastics also did not add Nassar to its “banned” list, for people who are permanently separated from the sport for rules violations.

It’s not clear whether Bono was involved in helping concoct the cover-up, but as senior vice president, she was a high ranking person in the firm. In 2013, the firm described her role as utilizing “her firsthand media relations experience to advise clients on media and strategic communications matters.”

From the Indianapolis Star in May 2018:

In one of the emails, Indianapolis attorney Scott D. Himsel told Nassar his medical techniques were under investigation, and “it is in everyone’s best interest” that Nassar not attend a gymnastics event that weekend. Himsel said USA Gymnastics would tell people Nassar was not attending for “personal reasons.”

Nassar replied: “Can we just say that i am sick? That would make more sense to everyone. Would that be ok?” Himsel agreed to have USA Gymnastics use that story… At least 14 more women and girls say they were sexually assaulted after June 2015, when USA Gymnastics received what it has said was its first complaint about Nassar.

In reaction to Bono’s hiring, the same gymnasts who took on USA Gymnastics over their handling of a sexual abuser called for action.

Raisman drew attention to the organization’s hiring of Bono on Twitter on Monday, saying that she and others had reported Nassar to USA Gymnastics in 2015, and that Faegre Baker Daniels — Bono’s firm — was also aware. “Why hire someone associated with the firm that helped cover up our abuse?” she wrote.

My teammates & I reported Nassar’s abuse to USAG in 2015. We now know USOC & lawyers at Faegre Baker Daniels (Mary Bono’s firm) were also told then, yet Nassar continued to abuse children for 13 months!? Why hire someone associated with the firm that helped cover up our abuse?

Clearly this is not a “new” USAG. Same corrupt decisions. Perhaps it’s because true accountability is less likely if authority is placed in the hands of someone similarly motivated to avoid it ….

USAG & USOC do you even care? You have let me down more than I ever thought was possible. I never imagined you’d handle this so horribly. Please read the pic attached and understand WHY I am so upset and why I care so much. The adults in charge must protect children. pic.twitter.com/ayrVQv2dEm

Kaylee Lorincz, a former gymnast who was abused by Nassar and who gave a victim’s impact statement during Nassar’s trial in Lansing, Michigan, in January also spoke out on Twitter, saying to Bono, “You owe me an explanation of why you and your firm allowed Larry to abuse me in 2016 after you were well aware that he was abusing little girls.”

You owe me an explanation of why you and your firm allowed Larry to abuse me in 2016 after you were well aware that he was abusing little girls. https://t.co/a6Xwl9S2vJ

USA Gymnastics’ abjectly poor handling of Nassar, and of an epidemic of sexual abuse that has taken place at USA Gymnastics member gyms over the past three decades, had already cost the organization two presidents.

After former president Steve Penny resigned in March 2017, USA Gymnastics hired Kerry Perry. But her term as president only lasted nine months, and included congressional testimony on the Nassar scandal that one Congress member called “despicable” for its lack of an apology to his victims. Perry also attempted to hire one of Nassar’s early defenders, Mary Lee Tracy, to a high-level role within USA Gymnastics as elite development coordinator.

In a statement following Perry’s firing, Sen. Richard Blumenthal (D-CT), who serves as the ranking member on the Senate subcommittee that oversees the United States Olympic Committee, said:

Throughout her disastrous nine-month tenure as president of U.S.A. Gymnastics, Perry demonstrated nothing but a willful and heartless blindness to the concerns of survivors who were abused by Larry Nassar. As president, Perry perpetuated U.S.A.G.’s complicity with Nassar’s horrific actions with her stunning and utterly shameful appearance before Congress in July and utterly misguided hiring of Mary Lee Tracy as the organization’s new elite development coordinator.

“don’t worry, it’s not like we needed a smarter usa gymnastics president”

Bono’s connections to the firm that helped USA Gymnastics cover up an investigation into Nassar’s crimes hasn’t been her only misstep.

On September 7, before she was named to the position of USA Gymnastics president, Bono tweeted a photo of her filling in the “swoosh” on a pair of Nike shoes, a reference to the boycott efforts by some who were opposed to Nike’s decision to make former NFL quarterback Colin Kaepernick the face of the company’s “Just Do It” campaign in early September.

But Simone Biles, the most decorated American gymnast of all time, is a Nike athlete, and called out Bono’s tweet on October 13, saying “don’t worry, it’s not like we needed a smarter usa gymnastics president or any sponsors or anything.” Since the Nassar scandal broke, the nonprofit USA Gymnastics has lost many of its biggest sponsors, including Proctor & Gamble, AT&T, Kellogg’s, and apparel sponsor Under Armour.

don’t worry, it’s not like we needed a smarter usa gymnastics president or any sponsors or anything https://t.co/cYQizcjywn

Bono then deleted the tweet and apologized, saying, “This doesn’t reflect how I will approach my position at USA Gymnastics.”

I regret the post and respect everyone’s views & fundamental right to express them. This doesn’t reflect how I will approach my position @USAGym I will do everything I can to help build, w/ the community, an open, safe & positive environment.

In her resignation statement, Bono focused on the Kaepernick-Nike angle. She wrote that she had merely exercised her First Amendment rights, and that one tweet “has now been made the litmus test of my reputation over almost two decades of public service.”

Mary Bono is OUT as @USAGym interim president and CEO. In exit stmt, she defends her tweet marking out @Nike logo on her sneakers: “With respect to Mr. Kaepernick, he nationally exercised his first amendment right to kneel. I exercised mine” pic.twitter.com/qS0uaGdXyl

But Bono didn’t explain whether or not she was aware of USAG’s work with Faegre Baker Daniels.

I reached out to USA Gymnastics to ask about both their vetting process of Bono and her role at Faegre Baker Daniels. USA Gymnastics’ board of directors provided Vox with a statement on Bono’s resignation but did not directly address those issues:

The USA Gymnastics Board of Directors accepted the resignation of Mary Bono as interim president and CEO. Despite her commitment to the sport of gymnastics and helping the organization move forward, we believe this is in the best interest of the organization. We, as a Board, are committed to taking action when we believe a change of course is necessary and to being responsive to our gymnastics community.

While we continue the search for a permanent president and CEO and are currently seeking input from key stakeholders on that search, we remain steadfast in our efforts to fundamentally transform the organization at all levels to ensure athlete safety and well-being is at the heart of everything we do. We are also committed to making sure that the focus remains on the athletes — including this week as our men and women head to Doha to compete in the World Championships. While we have made progress, we have much more work to do. This board is determined to take the necessary steps to support a safe, inclusive and competitive environment where all our athletes and members can grow, have fun and achieve their goals.

Is it safe to travel during the coronavirus outbreak? An infectious disease specialist explains.
A record number of women are running for the House this year
Google’s education tech has a privacy problem
President Trump's picks for his Cabinet and advisers
Immigrants at a detention center in Georgia were allegedly subjected to hysterectomies
Trump approval rating drops one week after reaching personal best