Matt Bevin’s defeat in Kentucky wasn’t just about him 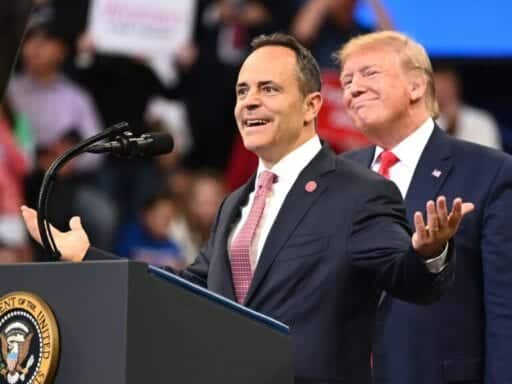 It’s really important to remember why Matt Bevin was so unpopular.

Democrat Andy Beshear’s big victory in the Kentucky governor’s race Tuesday night doesn’t mean that Democrats are suddenly competitive in Kentucky for the 2020 presidential race. Nor does it mean that Senate Majority Leader Mitch McConnell should be very afraid.

Yes, Beshear beat sitting Republican governor Matt Bevin in a deep-red state where Donald Trump won by 30 points. And yes, McConnell is up for reelection next year, but the Republican Party is still very powerful in Kentucky, and Tuesday’s election in Kentucky was by no means a blowout for Democrats.

Statewide, Republicans flipped two races — the Attorney General and Secretary of State. They kept their supermajorities in the state legislature; Trump remains popular in the state. This governor’s race was about the governor, and governor Bevin is incredibly unpopular. That’s a major reason why Bevin — with Trump’s cooperation — tried to make the race a referendum on Trump.

But it’s also wrong to assume Bevin’s loss was just about him. His defeat was a defeat for some of the core issues in the Republican Party. Bevin is politically toxic because for four years he aggressively pushed a pretty standard conservative agenda. He signed laws to mandate ultrasounds and require that health care providers show patients pictures of fetuses before performing an abortion. The state passed conservative labor laws, including a “right to work” policy to undercut unions, and repealed the prevailing wage, which guaranteed public works employees base salaries. Bevin allowed charter schools to come to Kentucky while proposing cuts to public schools.

At the center of Bevin’s agenda were two big policy pushes that came to define his tenure: cuts to Medicaid and cuts to retirement benefits.

Bevin made Kentucky’s vastly underfunded pension system, one that since 2000 has accumulated $43 billion in debt, a policy priority by pushing a reform that cut pensions for new teachers and funding for public schools, resulting in teacher protests. Earlier this year, Kentucky teachers called in sick en masse, shutting down every public school in the state.

Bevin also successfully pursued a waiver from the Trump administration to add work requirements, premiums, and co-payments to the state’s Medicaid program, which covers 1.2 million people in Kentucky. Kentucky expanded Medicaid under the Affordable Care Act, extending health care to roughly 400,000 people. As Dylan Scott explained for Vox, there’s a lot of evidence that most Medicaid recipients do work, but many could still lose their coverage because the requirements aren’t structured to address the irregularities of low income work. Bevin threatened to end Medicaid expansion in the state altogether if he wasn’t able to enact his work requirement policy, which stalled in the courts.

Bevin has billed his work requirements as an anti-poverty measure, as well as a way to make Medicaid expansion more fiscally responsibly in the state.

“I grew up well below the poverty level, never had the access to the health care system until I was an active duty Army officer in my 20s,” Bevin said in an interview with NPR. “And I recognize that people in those positions don’t need, as Administrator Verma said, to be treated with the soft bigotry of low expectations.”

So resolute in his position on this issue, Bevin actually tried to sue 16 Kentucky Medicaid recipients — publicly naming them — in order to make the case that his work requirements were legal.

Bevin’s aggressive stance didn’t help matters. When teachers began protesting, he called them “ignorant” and “thug”-like in their behavior, and said students were more likely to be sexually assaulted at home because teachers were refusing to be in the classroom. But the policies themselves — cutting Medicaid and retirement benefits — fit squarely within the national conservative platform.

And the fact that Trump, who remains very popular in the state, couldn’t significantly change the tide in this race does emphasize how unpopular some pillars of Republicans’ platform are.

Passing reforms like Bevin’s nationally has been more politically challenging for Republicans. But Trump’s 2020 budget proposal aimed to spend $1.5 trillion less on Medicaid — instead allocating $1.2 trillion in a block-grant program to states — and $25 billion less on Social Security over 10 years.

Republicans used their two years of controlling both houses of Congress and the presidency to repeatedly attempt to repeal Obamacare, including deep cuts to Medicaid. The House, under Speaker Paul Ryan, passed a bill in May 2017 that cut $800 billion from Medicaid over 10 years.

Polling shows these measures are extremely unpopular, and the public is skeptical about conservatives’ attempts to sell them. According to a 2018 poll from the Kaiser Family Foundation, 41 percent of Americans believe the main reason for introducing work requirements to Medicaid is to cut spending on the program, compared to 33 percent who see it as an anti-poverty reform. As Vox’s Dylan Scott pointed out, even Republican voters are split; 42 percent say it’s about pulling people out of poverty, and 40 percent say it’s about spending cuts, showing that Republicans’ efforts to label this as a way to address income inequality isn’t working.

Americans — 66 percent — believe people who are eligible for Medicaid should be allowed to stay on the program. As Larry Levitt, executive director of the Kaiser Family Foundation tweeted, the politics of Medicaid shouldn’t be underestimated.

As the ACA repeal and replace debate and yesterday’s election in Kentucky illustrated, Medicaid should not be underestimated as a political issue.

Retirement benefits are also politically potent. Beshear campaigned with a promise of delivering pensions and proposed new revenue streams to pull the state program out of debt. As even some of Bevin’s defenders will acknowledge, going after retirement benefits is politically toxic (even if they see it as necessary).

We’ve seen this before on a national scale. After George W. Bush was reelected president in 2005, he attempted to privatize Social Security and proposed replacing the benefit with voluntary personal retirement accounts. That effort, after huge pushback from Democrats, failed.

A 2018 survey from Public Policy Polling found that 72 percent percent of voters over the age of 65 said they were more likely to support a candidate who supported expanding Social Security. And we know older adults’ are skeptical about conservative ideas around retirement benefits, like privatizing Social Security.

It’s likely that Bevin’s persona amplified why he was so unpopular in the state. But by defeating him, Kentuckians were also rejecting conservative vision of social programs. This doesn’t mean that Kentucky is going to turn blue, but it should send Republicans a warning sign nationwide about some of their most closely held ideas.

Watch live: House debates and votes on two immigration bills
Is it safe for day care centers to be open right now?
San Francisco’s lonely war against Covid-19
Microsoft’s astonishing climate change goals, explained
When polls close on March 10 — and when we might get results
Joe Biden just snagged a surprise victory in the Texas primary after a last-minute surge