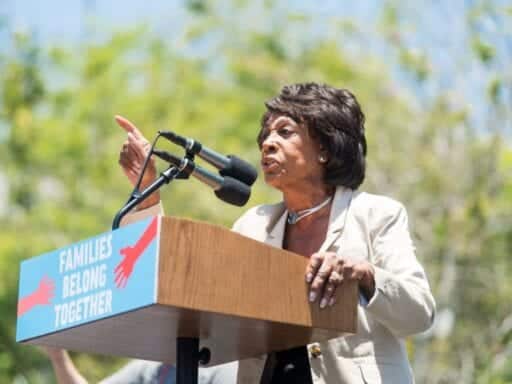 Waters has been asking questions about Trump’s financial ties. If Democrats win in November, she might be able to get answers.

If President Donald Trump doesn’t like Rep. Maxine Waters (D-CA), he really won’t like her if Democrats take back the House in the 2018 midterm elections. The California Democrat is poised to take over the House Financial Services Committee if Democrats are in the majority, and such a position, she could wield a lot of power.

There are already some hints about how Waters could use that perch to probe the scandals and conflicts of interest swirling around the Trump administration.

Waters is currently the ranking member of the committee, which is charged with overseeing the financial services industry, including banks, insurers, and housing.

As ranking member, she’s pushed for probes into the financial ties of Trump and those around him, including his relationship with Deutsche Bank and, perhaps, Russia.

Her hands have been tied on taking action because she’s not chair, but if Democrats take the House and she is, that changes. She’ll have the ability to issue subpoenas, call hearings, and request depositions, including regarding the money trails surrounding Trump.

“Maxine Waters is one of the leading voices of the Democratic Party, and the tone, tenor, and tenacity of the House Financial Services Committee chairmanship is going to change next year materially [if Democrats win],” Isaac Boltansky, director of policy research at research firm Compass Point, told me. “It’s been a little bit of a sleepy committee for the last few years, but that’s going to change if Rep. Waters gets the gavel.”

Waters has positioned herself as a thorn in Trump’s side

Waters is 14-term House member who represents California’s 43rd Congressional District, which covers part of Los Angeles. Since Trump was elected, she has positioned herself as a fierce Trump critic: She refused to attend his inauguration and boycotted his State of the Union address, and she’s repeatedly called for his removal from office. At Glamour magazine’s Women of the Year awards in November, she led attendees in a chant of “Impeach 45!”

Recently, she’s been in the headlines for urging her supporters to “push back” against Trump administration officials in public, telling them to confront Cabinet members and others to let them know “they’re not welcome anymore, anywhere.”

Waters said she received death threats after her remarks, and last week, she canceled a pair of appearances in Alabama and Texas out of caution.

But she’s remained defiant. At a Families Belong Together rally over the weekend, she criticized the Trump administration’s zero-tolerance immigration policies that resulted in family separation. She also called for Trump’s impeachment and challenged those making threats against her.

“If you shoot me, you better shoot straight,” she said at a Families Belong Together rally in Los Angeles. “There’s nothing like a wounded animal.”

Waters faced backlash over her comments about protesting Trump officials, including criticism from House Minority Leader Nancy Pelosi (D-CA) and House Speaker Paul Ryan (R-WI). Trump falsely claimed on Twitter she called for harming his supporters. (She did not.)

Despite the criticism, Democrats are sticking by Waters as their top candidate to run the Financial Services Committee should they take back the House in November. And there, she would have a lot of power.

As ranking member, Waters has pushed for more information on Trump and Deutsche Bank. The German bank is one of the few banks that still lends money to Trump after his multiple bankruptcies and financial woes. It’s also done deals with the president’s son-in-law and adviser, Jared Kushner. It made a $285 million loan to him just a month before the 2016 election. Waters has also pressed for details on Trump’s deals with Russia.

In May 2017, Waters sent a letter to Treasury Secretary Steven Mnuchin asking him for information on Trump’s financial ties with Russia. She has written multiple letters to Deutsche Bank asking about its Trump ties and in August 2017 asked House Financial Services Committee Chairman Jeb Hensarling (R-TX) to subpoena them. She and other committee Democrats also introduced a resolution of inquiry to “follow the Trump money trail” last year.

Because the minority party doesn’t have subpoena power, Maxine hasn’t been able to do much beyond writing letters. But if Democrats are in the majority, that changes.

Boltansky, the analyst, said he would expect multiple subpoenas, hearings, and other efforts to get information about and draw attention to Trump’s financial dealings with Waters in charge.

“She’s interested in Deutsche Bank’s relationship to Trump, in Citigroup’s relationship to the Kushner family, and how all of the different activities of the Trump administration have a bearing on public policy,” he said.

Her number one power is the hearing, he added, because “hearings with big names bring cameras, and that elevates an issue immediately.”

It is worth noting that special counsel Robert Mueller also reportedly subpoenaed Deutsche Banks for what it has on Trump or his associates. The White House is also probing Kushner’s loans from Citibank.

“Financial services issues are critical for all Americans and for our economy, and I am focused on making sure that our financial system is fair,” Waters said in an emailed statement. “I am committed to ensuring that hardworking Americans and our nation’s small businesses have opportunities to thrive, expanding and supporting affordable housing opportunities for our nation’s families, making sure that the safeguards are in place to prevent another financial crisis, protecting consumers and investors from bad actors, and conducting appropriate oversight of the administration and the regulatory agencies under the committee’s jurisdiction.”

Unless Democrats take back the Senate as well, which isn’t expected to happen, Waters won’t have a lot of opportunities to pass actual legislation out of the House Financial Services Committee. But she can still propose bills and sponsor legislation.

Beyond an aggressive oversight agenda, Waters is likely to focus on key messaging issues with legislative proposals — items such as economic inequality and financial industry regulation. This Congress, she has introduced 15 financial services bills so far, including one that would shut down banks that repeatedly harm consumers, another to improve public housing, and another to overhaul credit reporting.

By next year, the whole financial regulatory regime will be led by Trump appointees. Waters won’t be able to put a stop to Trump’s deregulatory push, but she could slow it with hearings, letters, and public attention, Boltansky said.

Waters is also expected to focus on embattled megabank Wells Fargo. Last year, she issued a 38-report on the bank and called for it to be shut down entirely.

“When a megabank has engaged in a pattern of extensive violations of law that harms millions of consumers, like Wells Fargo has, it should not be allowed to continue to operate within our nation’s banking system, and avail itself of all of the associated privileges afforded to it,” the report read.

She also secured a hearing on the Equifax data breach last year, and there could certainly be more of that.

Waters is not without baggage of her own, including on the financial front. She previously faced scrutiny over her role in pushing for a bailout for a bank tied to her family, the Daily Beast points out. An ethics investigation cleared her, but it did find wrongdoing by her then-chief of staff and grandson, and there have been other questions raised about whether members of her family have profited from her position. In 2011, watchdog group Citizens for Responsibility and Ethics in Washington (CREW) named Waters one of the most corrupt politicians.

Waters, 79, has for years been an outspoken member of the House, but in the era of Trump, her voice has grown much louder, or at least it’s gotten a lot more attention. A video of her declaring, “Reclaiming my time,” at a 2017 Congressional hearing went viral on the internet, and President Trump has made a habit out of targeting her in his attacks.

The face of the Democrats is now Maxine Waters who, together with Nancy Pelosi, have established a fine leadership team. They should always stay together and lead the Democrats, who want Open Borders and Unlimited Crime, well into the future….and pick Crooked Hillary for Pres.

Crazy Maxine Waters, said by some to be one of the most corrupt people in politics, is rapidly becoming, together with Nancy Pelosi, the FACE of the Democrat Party. Her ranting and raving, even referring to herself as a wounded animal, will make people flee the Democrats!

If Democrats take back the House in November, and Waters takes over the House Financial Services Committee, as expected, you can expect a lot more Maxine Waters headlines, Trump tweets, and memes.

Reconsidering the US-Saudi relationship
Progressives warn Warren and Sanders are undermining the movement by fighting
Big Tech is “scary” because it wants to be the solution to everything, New York City Mayor Bill de B...
4 things to know about Australia’s contentious election
When did good governance become an “armageddon option”?
The Supreme Court will not review the case of Adnan Syed, subject of Serial podcast