Maxine Waters isn’t standing down: “If you shoot me, you better shoot straight” 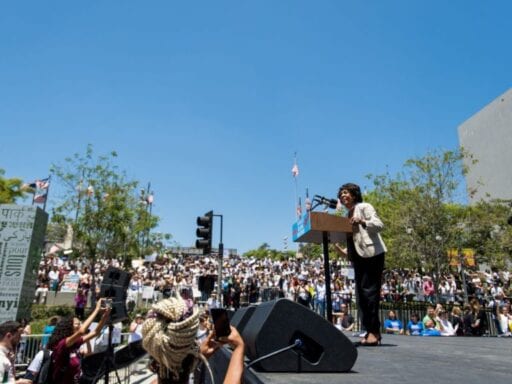 The California Democrat called to “Impeach 45” and attacked Trump’s immigration policies at a rally on Saturday.

Days after reportedly receiving death threats for urging Americans to “push back” against members of the Trump administration in public, Rep. Maxine Waters (D-CA) is back on the offensive.

The California Democrat on Saturday slammed the White House’s zero-tolerance immigration policy that separated families, asking, “How dare you?” She called for President Donald Trump’s impeachment and responded to the threats which had made her cancel previous speaking events.

“If you shoot me, you better shoot straight,” she said at a “Families Belong Together” in Los Angeles. “There’s nothing like a wounded animal.”

Waters, who represents California’s 43rd District, centered in south central Los Angeles, has emerged as a fierce Trump critic: She refused to attend his inauguration and boycotted his State of the Union Address, and she’s repeatedly called for him to be removed from office. At Glamour magazine’s Women of the Year awards last November, she led attendees in a chant of, “Impeach 45!”

She renewed the “Impeach 45” call on Saturday, and by Sunday morning, it was trending on Twitter.

Waters on Saturday attacked Trump for enacting immigration policies that resulted in the separation of more than 2,000 migrant children from their parents at the US-Mexico border. Trump has signed an executive order that keeps parents and kids together, but reuniting already separated families has been slow-going, and now instead of splitting up families, the administration plans to keep them in indefinite detention.

She said that Trump thinks he can “get away with everything” but that he’s gone “too far” in breaking up families. “I don’t care whether you’re a Democrat or Republican, I don’t care what nationality you are, I don’t care what ethnic group you are, we all love the children,” she said. “This country belongs to all of this.”

Waters found herself in hot water after a separate rally last weekend, when she encouraged supporters to publicly protest Trump administration officials, apparently reacting to incidents involving officials such as Sarah Sanders and Kirstjen Nielsen being confronted in restaurants.

“If you see anybody from that Cabinet in a restaurant, in a department store, at a gasoline station, you get out and you create a crowd and you push back on them and you tell them they’re not welcome anymore, anywhere,” she said.

The comments were met with backlash, including criticism from House Minority Leader Nancy Pelosi (D-CA) and House Speaker Paul Ryan (R-WI). Trump also hit back, falsely claiming on Twitter that Waters had called for harm to his supporters. She did not.

Waters on Thursday said she had seen an increase in threats, including “one very serious death threat,” since her original remarks last weekend and thus decided to cancel a pair of appearances in Alabama and Texas.

As USA Today notes, this isn’t the first time the veteran legislator has made such a comment. She said something similar when she was speaking at a town hall meeting in Inglewood, California, last year, when she heard a pop while addressing the crowd.

“I don’t know what the sound was,” she said. “But whoever it is, if it’s a shot, you better shoot straight.”

Early polls show voter support for impeachment is growing
Democratic hopes for climate policy may come down to this one weird Senate trick
You can’t turn the economy back on like a light switch
A Prince Andrew interview has renewed questions about his relationship with Jeffrey Epstein
The biggest lie we still teach in American history classes
The US just brokered another peace deal for Israel, this time with Sudan