McCain is hanging over Arizona’s primaries, even though his seat isn’t on the ballot 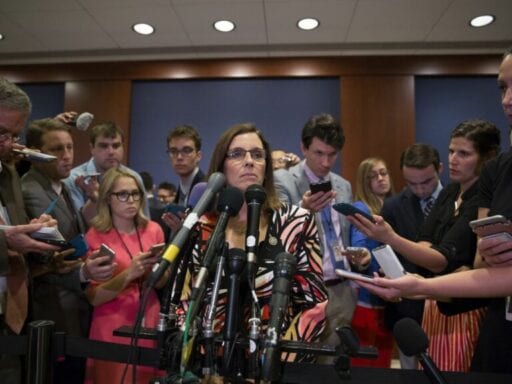 But McCain’s seat won’t be on the ballot in November or during Tuesday’s Arizona primary — which will pick a nominee for Arizona’s other Senate seat, currently held by Sen. Jeff Flake, who is retiring. Even so, McCain’s death adds extra attention to what was already expected to be a hotly contested race.

On Tuesday, three Republicans will square off in the Arizona primary to determine who will be on the GOP ticket to replace Flake in the Senate next year. The contenders are Rep. Martha McSally, Dr. Kelli Ward, and former sheriff and Trump pardon recipient Joe Arpaio. McSally, the first woman combat pilot in US history and a moderate, is considered to be the frontrunner, but there are no guarantees.

The race has gotten ugly and expensive, with more than $7 million being spent by outside groups. Whoever wins on Tuesday will likely face Democratic Rep. Kyrsten Sinema in the fall.

McCain’s death isn’t just hanging over the Republican primary — it also draws attention to the governor’s race. Gov. Doug Ducey, a Republican, will appoint a replacement to fill McCain’s seat until 2020. Ducey is up for reelection this year and has a primary challenger, Secretary of State Ken Bennett, on Tuesday. Ducey won’t attend any campaign events until after September 2, when McCain is laid to rest.

Arizona’s Republican Senate primary is an ugly one

On Tuesday, McSally will face off against Ward and Arpaio to decide who will be on the Republican ticket to replace Flake in the fall. Flake, a vocal Trump critic, announced he was retiring last October.

McSally is expected to win the race; polling puts her at 47 percent support, Ward at 27 percent, and Arpaio at 13 percent. That hasn’t stopped the contest from getting ugly, with two Trump-style hardliners — Arpaio and Ward — in the race.

The race has sort of become a test of who’s most loyal in the Trump era. McSally has tried to embrace the president, whom she now calls a “friend,” and attacked Ward in political ads, saying she doesn’t support Trump’s clampdown on illegal immigration, and pointing out she used to be a Democrat. (Ward registered as one when she was 18; she’s now 49.)

Ward, meanwhile, has insisted that McSally, generally seen as the moderate in the race, isn’t pro-Trump enough, pointing out that she didn’t endorse him in 2016.

And then, of course, there’s former Maricopa County Sheriff Arpaio, who is making what will probably be his last stand for a spot in the public sphere. On the campaign trail, he’s been touting his closeness to the president and pointing out parallels between his and Trump’s stances on immigration and crime. Trump pardoned him last year.

Trump hasn’t endorsed anyone in the race, but it’s still become a sort of proxy for the national dynamics within the Republican Party. There’s an ongoing push-pull between Trump’s core supporters and those more on the margins. Many moderates who previously rejected the president are now embracing him after seeing their colleagues who have criticized them — including Flake — ultimately be forced to stand down.

McCain’s seat isn’t on the ballot, but he’s still a major figure in the race

McCain’s seat won’t be on the ballot on Tuesday or in November. By Arizona state law, had McCain left office or died before May 30, his Senate seat would have been on the ballot in November 2018. But since it’s after May 30, Ducey will pick his replacement, who will also be a Republican, as McCain was.

That doesn’t mean McCain won’t be a factor in Arizona politics.

Ward unsuccessfully challenged McCain for his seat in 2016 and has been a fierce critic of the senator. She faced heavy criticism over the weekend when on Saturday, just hours before his death, she suggested on Facebook that his Friday announcement that he was halting medical treatment for his brain cancer was timed to hurt her campaign.

WHAT IS WRONG WITH YOU?@kelliwardaz staffer: I wonder if John McCain’s trying to steal attention from Ward’s bus tour by announcing his life is coming to an end.
Ward: Yup, it’s all about me. #AZSEN pic.twitter.com/AXKAOhKYkU

Ward in a follow-up comment wrote that she was praying for McCain as “a man who is suffering” and blamed the media for “making something out of nothing.”

The Arizona Republic rounded up the reactions to McCain’s death from other Arizona politicians running this election cycle. McSally’s operation will not campaign on Monday or schedule any events for Wednesday or Thursday, though she does have an election night event scheduled for Tuesday. Arpaio’s campaign on Friday complained that McCain’s wife, Cindy McCain, had blocked him from seeing her posts on Twitter. It later took down the complaint.

Sinema told the publication she would halt campaigning: “To honor Senator John McCain’s life of service and devotion to our country, we will step off the campaign trail and devote Wednesday and Thursday to pay our respects and give back to the state that we all love,” she said in a statement.

Ducey will stay off of the campaign trail as well.

Flake, now the senior senator from Arizona, released an op-ed honoring McCain in the Washington Post and spoke with multiple news shows on Sunday about his former colleague. “We may never see his like again, but it is his reflection of America that we need now more than ever,” he wrote in the Post op-ed.

According to the Arizona Republic, Sinema seems to have softened her attacks on her presumed November rival, McSally, while McSally has forged ahead. Sinema’s ads on health care continued to run on Sunday, as did McSally’s attack ads against Sinema. McSally accused Sinema of “denigrating our service” after the 9/11 attacks.

Ducey has said he will not name McCain’s replacement until after his burial. By Arizona state law, the governor has to choose someone from the same party as McCain — meaning a Republican — and he has already ruled himself out.

Whoever Ducey chooses will hold McCain’s seat until the next general election in 2020, and the winner of that election will serve out the rest of McCain’s six-year term, which ends in January 2023.

McCain’s death in office marks the first time in Arizona’s more than 100-year history that a governor would have to fill a Senate seat by appointment. Ducey’s office called conjecture about whom he might pick ahead of McCain’s death “disgraceful,” but that didn’t stop the guesses as to who it might be. Given that Republicans have only a 51-seat majority after Democrat Doug Jones’s win in Alabama, every vote counts, and the GOP is paying attention.

The Arizona Republic listed a number of names that have been floated as potential appointees to replace McCain. They are: