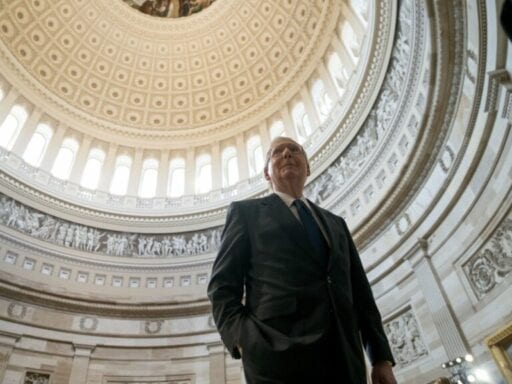 Senate Majority Leader Mitch McConnell criticized Democrats on the Senate floor Monday, saying that the accusation of sexual assault against Supreme Court nominee Brett Kavanaugh had been “brought forward at the last minute in an irregular manner.”

McConnell didn’t comment on the substance of accusations by Christine Ford, which he referred as “misconduct” allegations. Ford, a Palo Alto University professor and a high school classmate of Kavanaugh, has accused the Supreme Court nominee of attempting to force himself on her when he was 17 and she was 15. Kavanaugh has unequivocally denied Ford’s account, and Kavanaugh and Ford have both said they are willing to testify about the accusations before Congress.

Democrats and Republicans alike are calling for an investigation into the allegations, though it’s still unclear what this review will entail whether it will actually delay Kavanaugh’s confirmation process.

But if Kavanaugh’s nomination really is in dire straits, it could be a huge problem for McConnell. Republicans ideally would like a conservative justice to be confirmed before Election Day on November 6. If Democrats retake the Senate, a victory that seems unlikely currently, they theoretically could imperil all of Trump’s future Supreme Court nominees.

Pushing the federal judiciary and the Supreme Court to the right has been one of McConnell’s (R-KY) signature accomplishments.

But the allegation of sexual assault is the most severe impediment so far to Kavanaugh being confirmed.

On the Senate floor Monday, McConnell rebuked Democrats for not revealing the allegations sooner and encouraged Senate Judiciary Chair Chuck Grassley (R-IA) to proceed with an investigation.

Now, on a final matter, Mr. President, it’s been 70 days — 70 days — since the president nominated Judge Brett Kavanaugh to fill the current vacancy on the Supreme Court.

For more than two months, the Senate has pored over Judge Kavanaugh’s professional record. We have reviewed the 300-plus opinions he has authored while serving on the DC Circuit. More pages than have ever been produced for a Supreme Court nomination, more than for the five past nominations combined. And testimony from prominent legal scholars and top litigators who praised the nominee’s intellect and his exemplary performance on the federal bench.

We have also considered a wealth of evidence that pertains to Judge Kavanaugh’s character and his personal integrity. We have heard testimony or received open letters from literally hundreds of men and women who know Judge Brett Kavanaugh, who have worked alongside him or clerked for him as a judge, or who have known him and his family personally over the years.

This is what the Senate has considered for the past 70 days. In the Senate, and around the country, almost everyone who went into this process with an open mind who was prepared to give Judge Kavanaugh a fair hearing has come away impressed, but now — now an accusation of 36-year-old misconduct dating back to high school has been brought forward at the last minute in an irregular manner. It is an accusation of which Judge Kavanaugh has completely and unequivocally denied.

This is what he said: “This is a completely false allegation. I have never done anything like what the accuser describes, to her or to anyone.”

It is an accusation which the ranking member of the committee of jurisdiction [Sen. Diane Feinstein (D-CA)] has known about for at least six weeks, yet chose to keep secret until the 11th hour. Neither she nor any of her Democratic colleagues chose to raise this allegation during the committee staff’s bipartisan background calls with the nominee. They did not raise it even with the name redacted in the 65 meetings Judge Kavanaugh held with senators before his confirmation hearing, including his private meeting with the ranking member.

They did not raise it even with the name redacted in four days of exhaustive public hearings while Judge Kavanaugh testified under oath. Even though they chose to raise myriad other matters at the hearing, including sometimes bizarre innuendo.

They did not raise it in the closed session, the proper forum where such an allegation could have been addressed with discretion and sensitivity. They did not raise it in the 1,000-plus follow-up questions that senators sent to Judge Kavanaugh in writing. But now — now, at the eleventh hour, with committee votes on schedule, after Democrats have spent weeks and weeks searching for any possible reason that the nomination should be delayed, now they choose to introduce this allegation.

Not through the standard bipartisan process, not by advising the judiciary committee colleagues and committee staff through proper channels — oh, but by leaking it to the press. Because the chain of custody of this letter runs through the Democratic side of the Judiciary Committee. That’s the chain of custody. I can’t explain the situation any better than the senior senator from Maine put it yesterday evening when she said if they believed Judge Kavanaugh’s accuser, why didn’t they serve us this information earlier so that he could be questioned about it?

And if they didn’t believe her and chose to withhold the information, why did they decide at the eleventh hour to release it? It’s really not fair to either of them the way it was handled. Well, if as the senior senator from Texas [Sen. John Cornyn (R)] said yesterday — or earlier today — the Democrats have so egregiously mishandled this up until now, it’s no excuse for us to do the same.

I’m glad that Chairman Grassley is following standard practice and regular order, and he stated he plans to pursue this matter by the book, with bipartisan interviews of both Judge Kavanaugh and Dr. Ford. I have great confidence in Chairman Grassley and his ability to proceed through this process.

Judge bars Paul Manafort from wearing a suit at court hearings
A Republican helped sink one of Trump’s court nominees over his racist college writings
Trump unironically says his sons receiving foreign payments “would be the biggest story of the centu...
America’s weak gun laws enable shootings by terrorists and extremists
John Cornyn becomes the latest Senate Republican to ramp up criticism of Trump
There’s finally a drug for postpartum depression. Too bad it’s $34,000.