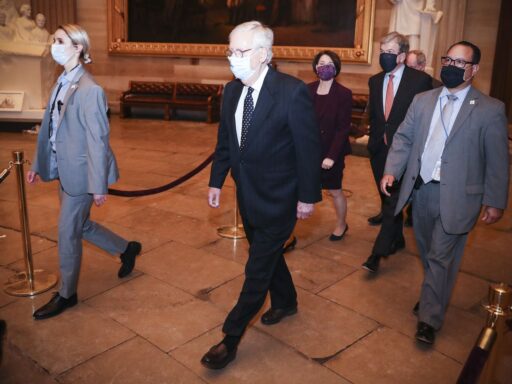 Twelve of President Ronald Reagan’s nominees were confirmed in his first two days in office, as were 13 of President Bill Clinton’s nominees, seven of President George W. Bush’s, and nine of President Barack Obama’s. President Donald Trump’s cabinet was confirmed more slowly, but the Senate still respected the tradition of holding confirmation hearings prior to Trump’s inauguration.

But so far, no hearings have been held on President-elect Joe Biden’s nominees — meaning Biden could face a serious delay in getting his administration ready to begin governing.

The Senate, which is will still be led by Senate Majority Leader Mitch McConnell (R-KY) for a little over a week, is currently out of session and will remain out of session until January 19, the day before President-elect Joe Biden takes office (technically, the Senate will hold brief “pro forma” sessions on the 12th and the 15th, but no business is conducted at these sessions).

As CNN’s Kylie Atwood notes, this is the first time in at least 10 presidential transitions where the incoming president’s nominee to be secretary of state won’t even have a confirmation hearing before that president’s Inauguration Day. And it’s unclear whether any hearings will be held before the Senate is scheduled to reconvene on January 19.

The Senate Finance Committee announced on Tuesday that it will hold a confirmation hearing for Treasury Secretary nominee Janet Yellen on January 19, and the Armed Services Committee will hold a hearing for Defense Secretary nominee Lloyd Austin on the same day. But confirmation hearings for the incoming cabinet typically begin much sooner. Eight days before Trump took office, for example, six of Trump’s cabinet nominees had already received hearings.

In case there is any doubt, incoming Senate Majority Leader Chuck Schumer (D-NY) is eager to start hearings right away. In a “Dear Colleague” letter circulated to senators on Tuesday, Schumer wrote that “the violent insurrection at the U.S. Capitol on January 6th showed us we need qualified Senate-confirmed people (not in an acting capacity) in key national security positions on Day One.”

He added that “the economic challenges our nation faces also require having key economic nominees confirmed and on the job ASAP.”

Part of what could be complicating things is the Senate’s shifting power dynamics. When all members of the 117th Congress take their seats, Democrats will have the narrowest majority in the Senate. For the moment, however, Senators-elect Raphael Warnock (D-GA) and Jon Ossoff (D-GA) are waiting for the state of Georgia to officially certify their election victories. Georgia Secretary of State Brad Raffensperger, a Republican, has until January 22 to do so.

Even after Warnock and Ossoff take their seats, moreover, the Senate will be evenly divided between Democrats and Republicans. That means that the vice president’s tie-breaking vote will determine who is Senate majority leader — and Democratic Vice President-elect Kamala Harris does not take office until January 20.

For the moment, incoming Democratic committee chairs do not yet have control over the committees that they will soon lead.

It also means that, for at least the next several days, McConnell rules the Senate. And he appears to be using his final days as majority leader to undercut the Biden presidency.

McConnell is using impeachment as an excuse to further delay Senate business.

Indeed, McConnell also seems to view the recent attack on the US Capitol by a pro-Trump mob, and Democratic calls to impeach Trump for encouraging this attack, as an additional opportunity to undermine Biden.

McConnell’s office did not respond to a request for comment regarding the timing of confirmation hearings.

Last Friday, as House Democrats began to organize their effort to impeach Trump for a second time, McConnell circulated a memo laying out how the Senate would conduct an impeachment trial. The Senate, McConnell noted, is “currently in recess” until January 19. He then claimed that it is impossible to recall the Senate before this date unless all 100 of its members unanimously consent to do so.

Schumer is currently exploring whether he and McConnell could bypass this unanimous consent requirement under a post-9/11 resolution permitting “the majority and minority leaders or their designees, when the Senate is out of session, acting jointly and within the limits of the Constitution, to modify any order for the time or place of the convening of the Senate when, in their opinion, such action is warranted by intervening circumstances.” But even if this resolution does permit Schumer and McConnell to call the Senate back into session early, McConnell would have to agree to such a move.

McConnell’s impeachment memo also claims that, shortly after the Senate does reconvene, it “must” proceed to consider the articles of impeachment against Trump. This trial, according to McConnell, would “begin after President Trump’s term has expired” — most likely on January 20 or January 21.

Thus, under the process McConnell lays out, the Senate would not be able to remove Trump from office even if the requisite number of senators believe that Trump should be removed — under the Constitution, two-thirds of the senators present must agree to remove Trump. Moreover, because McConnell claims that the Senate must begin an impeachment trial almost immediately after Biden becomes president, this trial could further delay confirmation of Biden’s cabinet and the passage of legislation such as a Covid-19 relief bill.

Even if McConnell does successfully delay Trump’s second impeachment trial until after Trump leaves office, such an impeachment is not futile. The Senate does not just have the power to remove an impeached official from office, it may also permanently disqualify Trump from holding office. In other words, senators could potentially forbid Trump from running for president again.

It’s also unclear whether an impeachment trial will actually prevent the Senate from conducting other business — especially once Warnock and Ossoff are sworn in and Schumer becomes majority leader. Biden is reportedly urging the Senate to “bifurcate” its proceedings during the impeachment trial — potentially allowing the Senate to focus on the trial for part of each day and on other business for the remainder of the day.

But Biden is still likely to begin his presidency a few steps behind where it should be. Unless confirmation hearings begin very soon, holding those hearings after Biden takes office could delay the confirmation of individual cabinet members by days or even weeks. And even if those hearings move at lightning speed, Senate Republicans could still potentially block all confirmations until Warnock and Ossoff take their seats.

Meanwhile, the United States just suffered its worst domestic attack since 9/11. And crucial agencies such as the Departments of Justice, Homeland Security, and Defense will lack permanent leadership.

The absurdly high cost of insulin, explained
SNL tries — and fails — to find humor in Kavanaugh’s Supreme Court confirmation
Trump has created a loophole to allow pipelines to avoid environmental review
I didn’t read Harry Potter when I was growing up. And I wasn’t alone.
Biden’s post-Electoral College speech was a stinging rebuke of Trump
The future of commercial space travel is almost here with the latest SpaceX launch