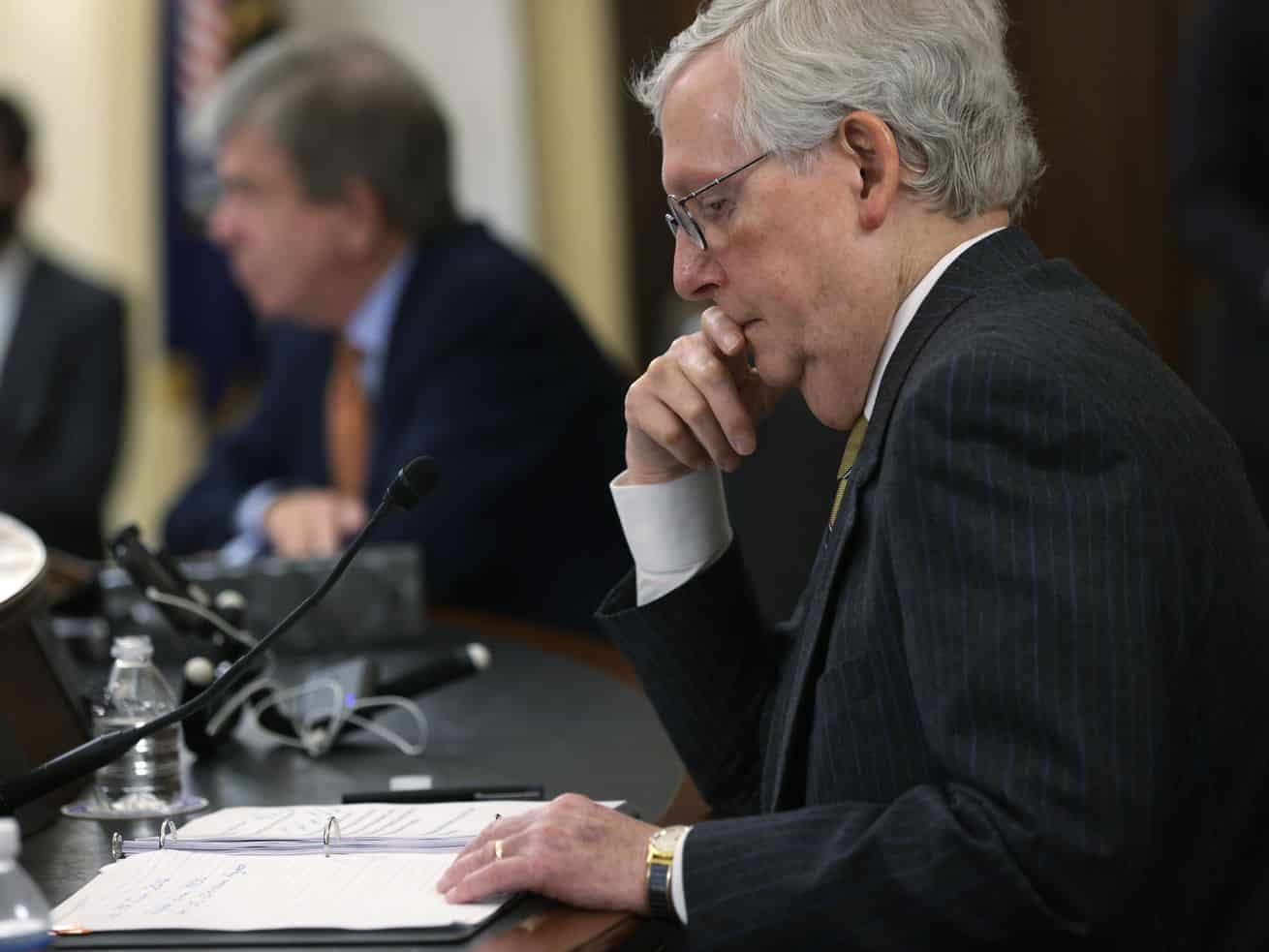 Cancel culture is alive and well in the GOP.

On Monday, Senate Minority Leader Mitch McConnell leveled a very odd threat against corporate America for a senior lawmaker in a nation governed by the First Amendment.

Warning companies to “stay out of politics,” McConnell said that “corporations will invite serious consequences if they become a vehicle for far-left mobs.” (McConnell, a longtime opponent of campaign finance laws, later clarified that he is “not talking about political contributions” when he tells corporations to stay out of politics.)

McConnell did not elaborate on how, exactly, he plans to cancel corporations that express left-leaning political views, but many of his fellow Republican lawmakers have. After Major League Baseball announced that it would move its 2021 All-Star Game from Atlanta because the state of Georgia enacted a law limiting voting access, several Republican lawmakers threatened to retaliate against the league by stripping it of an exemption from federal antitrust laws.

Why does @MLB still have antitrust immunity? It’s time for the federal government to stop granting special privileges to specific, favored corporations—especially those that punish their political opponents. https://t.co/k3GIZuGYHB

Similarly, after Delta Air Lines spoke out against the same anti-voting law, Georgia’s GOP-controlled House voted to strip away a sales tax exemption for jet fuel that primarily benefits Delta (the bill did not pass the state senate).

It’s not hard to understand the politics of these threats. Both MLB and Delta enjoy special exemptions from the law that aren’t enjoyed by many other companies or by individual Americans. So it’s not hard for these lawmakers to gin up resentment against them for receiving such privileged treatment.

But it should go without saying that using the power to make laws in order to punish critics of a particular policy, especially if that policy is itself designed to restrict voting, is inconsistent with democratic values. And so the Constitution forbids this sort of behavior by lawmakers. It is unconstitutional for the government to retaliate against anyone for expressing a political view that members of the government do not share.

The Constitution permits Congress to impose antitrust regulation on a baseball league (although there are actually very good policy reasons why sports leagues should enjoy some immunity from ordinary antitrust law). And the Constitution also permits Georgia to tax airlines.

Yet, as the Supreme Court explained in Perry v. Sindermann (1972), “even though a person has no ‘right’ to a valuable governmental benefit and even though the government may deny him the benefit for any number of reasons, there are some reasons upon which the government may not rely.” Among other things, the government “may not deny a benefit to a person on a basis that infringes his constitutionally protected interests — especially, his interest in freedom of speech.”

It is flatly unconstitutional, in other words, to strip a company of a “valuable governmental benefit” simply because lawmakers wish to silence that company.

The constitutional rule against stripping someone of a government benefit in order to control their speech stretches back many decades.

California law gave a property tax exemption to honorably discharged World War II veterans. Yet, in 1954, it revised the form that veterans use to claim this exemption to require those veterans to swear a loyalty oath: “I do not advocate the overthrow of the Government of the United States or of the State of California by force or violence or other unlawful means, nor advocate the support of a foreign government against the United States in event of hostilities.”

After some veterans refused to swear this oath, their refusal wound up in the Supreme Court, and the Court ruled in Speiser v. Randall (1958) that these taxpayers “could not be required to execute the declaration as a condition for obtaining a tax exemption or as a condition for the assessor proceeding further in determining whether they were entitled to such an exemption.”

Speiser was a fairly early articulation of what is known as the “Unconstitutional Conditions Doctrine.” Both Congress and the states provide many benefits to individual citizens that are not required by the Constitution — California is not required to give tax breaks to veterans. But once a benefit is offered, the government may not strip someone of that benefit because they exercise their First Amendment rights.

This notion that government benefits may not be conditioned on either compelled silence or compelled speech has endured, even as the Supreme Court has grown more conservative. In United States Agency for International Development v. Alliance for Open Society International, Inc. (2013), for example, the Court struck down a requirement that organizations that receive certain federal grants intended to fight the global HIV epidemic must “have a policy explicitly opposing prostitution and sex trafficking.”

The Open Society International case drew a somewhat subtle line. As Chief Justice John Roberts explained in his majority opinion, “Congress can, without offending the Constitution, selectively fund certain programs to address an issue of public concern, without funding alternative ways of addressing the same problem.” So Congress was allowed to prohibit groups that receive federal anti-HIV grants from using those funds to “promote or advocate the legalization or practice of prostitution or sex trafficking.”

But Congress could not silence grant recipients with pro-sex work views, so long as those recipients did not use the government’s money to advance that viewpoint. The requirement that such grant recipients actively oppose sex work, according to Roberts, “compels as a condition of federal funding the affirmation of a belief that by its nature cannot be confined within the scope of the Government program.” For this reason, “it violates the First Amendment and cannot be sustained.”

A similar logic could be applied to a hypothetical bill stripping MLB of its antitrust exemption or stripping Delta of its tax benefits — provided that those benefits were stripped because the government wished to punish these companies for exercising their First Amendment rights. Again, the government is under no obligation to provide such benefits to these companies, but it cannot condition such a benefit on a company’s silence.

Having laid out why punishing a company for expressing a political opinion violates the First Amendment, it’s worth noting that this Supreme Court — with six of its nine seats held by Republican appointees — might impose a very high burden of proof on companies that are targeted by the GOP.

Speiser and Open Society International were fairly easy cases because the government was quite explicit about the fact that it was conditioning a federal benefit on certain behavior by the beneficiaries. In Speiser, a government form made it clear that veterans must swear a loyalty oath in order to get a tax benefit. In Open Society International, an act of Congress explicitly stated that only groups that oppose sex work could receive certain grants.

The fact that Republican lawmakers like Sen. Mike Lee (R-UT) and Rep. Jeff Duncan (R-SC) have bragged openly about their plans to strip MLB of its antitrust exemption in order to punish it for exercising its First Amendment rights is powerful evidence that, if Congress were to pass such a law, it did so for unconstitutional reasons.

But the Court has looked the other way at even more powerful evidence in the past.

In Trump v. Hawaii (2018), the Court upheld a Trump administration policy prohibiting nationals from several majority Muslim nations from traveling to the United States. It did so despite the fact that Trump and his inner circle repeatedly bragged about his plans to target Muslims, in violation of the Constitution’s ban on policies “prohibiting the free exercise” of religion.

As a candidate for the presidency, for example, Trump called for a “total and complete shutdown of Muslims entering the United States until our country’s representatives can figure out what is going on.” After he was attacked for promoting an unconstitutional policy, Trump even bragged about how he would try to obfuscate the real purpose of this policy.

“People were so upset when I used the word Muslim,” Trump told NBC’s Meet the Press in 2016, “and I’m okay with that, because I’m talking territory instead of Muslim.”

By “talking territory,” Trump meant that he would hide the real purpose of his travel ban by prohibiting people from certain nations from entering the country, rather than by explicitly banning Muslims. As Trump lawyer Rudy Giuliani admitted in 2017:

So when [Trump] first announced it he said, “Muslim ban.” He called me up and said, “Put a commission together, show me the right way to do it legally.” . . . And what we did was we focused on, instead of religion, danger. The areas of the world that create danger for us. Which is a factual basis. Not a religious basis.

And yet, the Supreme Court dismissed this evidence of unconstitutional intent and upheld the travel ban challenged in the Hawaii case.

That said, Roberts’s majority opinion in Hawaii focused on the extraordinary level of deference courts typically give to elected officials in national security cases. The Chief warned that “any rule of constitutional law that would inhibit” the president’s flexibility “to respond to changing world conditions should be adopted only with the greatest caution,” adding that “our inquiry into matters of entry and national security is highly constrained.”

There are few, if any, national security implications to a case about antitrust laws and baseball — or about state-level tax breaks for airlines. So the Court may be more open to evidence of invidious intent in a case involving GOP retaliation against corporations than it was in the Hawaii case.

Republicans, in other words, are playing with constitutional fire by leveling threats against companies that disagree with their stance against democracy.