McDonald’s rolls out meatless Beyond burgers in Canada 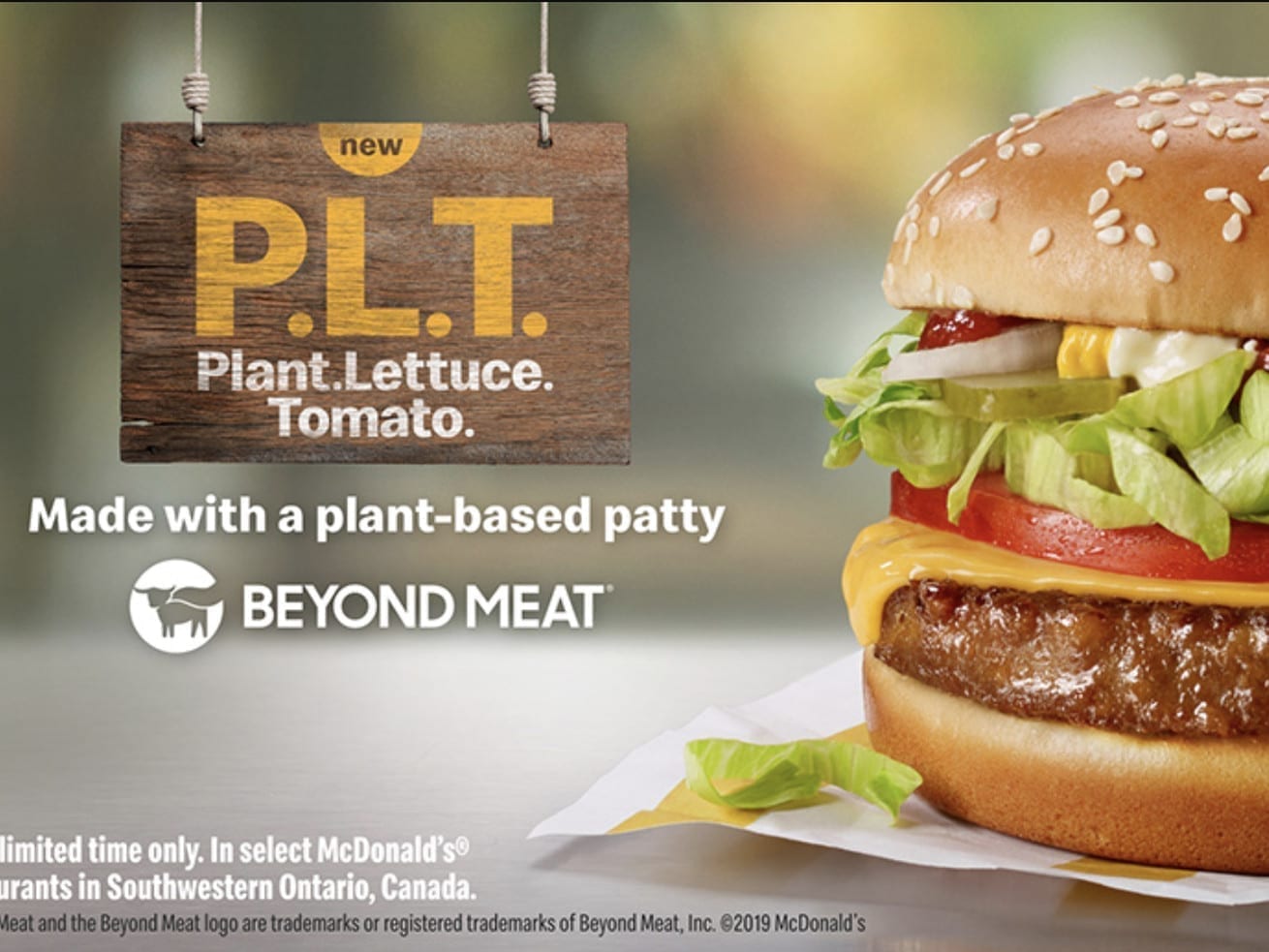 The fast-food chain is the latest to try out meatless meat offerings.

But there’s been one conspicuous holdout — McDonald’s.

The world’s second-largest fast food company (only Subway has more locations) announced this morning that they will start offering Beyond burgers at 28 locations in Canada, starting on September 30. They’re calling it the P.L.T. (for “Plant. Lettuce. Tomato.”) and it’ll be available for 12 weeks in southern Ontario. Most other companies have started with similarly small rollouts, and taken the products to more locations after strong initial interest.

“As customer interest in plant-based options accelerated rapidly, our curiosity piqued, too,” McDonald’s executive Ann Wahlgren said in a statement. “We’ve kept an eye on this emerging trend and now we’re ready to learn more by running a test in one of our markets.”

The arrival of the P.L.T. is a reversal for McDonald’s, which reportedly delayed getting a plant-based burger deal this summer out of concerns that the consumer interest in them would fade. (The company does have veggie burger options in some locations, including Germany and Israel.) “We’ve got to make sure the consumer trend is sustaining,” McDonald’s CEO said on a May call about the company’s finances.

But now it appears that the company has made up its mind — or at least found the trend too compelling to be ignored any longer.

Vegan food has been around for a long time. But in the last few years, two major companies — Beyond Meat and Impossible Foods — took their vegan products to restaurants with a new pitch: they weren’t for vegans. The idea, instead, was that meat-eaters might be willing to replace burgers, ground beef, sausages and so on in their diets with plant-based food, if the plant-based food tasted just as good and provided the same essential nutrients.

That’s because even meat-eating Americans have been increasingly expressing reservations about the way our food system puts meat on their plates. Meat production is one of the biggest sectors contributing to global climate change, public health experts warn about antibiotic resistance, and leaked footage from factory farms confirms what many Americans kinda already knew — that animals there are treated terribly.

Are they about to go vegetarian? No. But are they willing to order Impossible Whoppers or Kentucky Fried Beyond Chicken? Many of them apparently are. Plant-based meat has launched to incredible enthusiasm at fast-food joints around the US, and is now available in supermarkets, too.

McDonald’s will sell its plant-based burger for $6.49 in Canadian dollars, or about USD $4.90. “McDonald’s has a proud legacy of fun, delicious and craveable food — and now, we’re extending that to a test of a juicy, plant-based burger,” Wahlgren said. “We’ve been working on our recipe, and now we’re ready to hear feedback from our customers.”

US consumers will have to wait and see how Canadians greet the P.L.T.

4 lessons the US should learn from Italy’s coronavirus mistakes
How gyms convince new members to stay past January
The week in US-Saudi Arabia-Iran tensions, explained
Verizon, T-Mobile, Sprint, and AT&T could be facing big fines for selling your location data
A black candidate made a rap album. His white opponent says it makes him unfit for Congress.
How the Hong Kong protests created the #BoycottMulan campaign