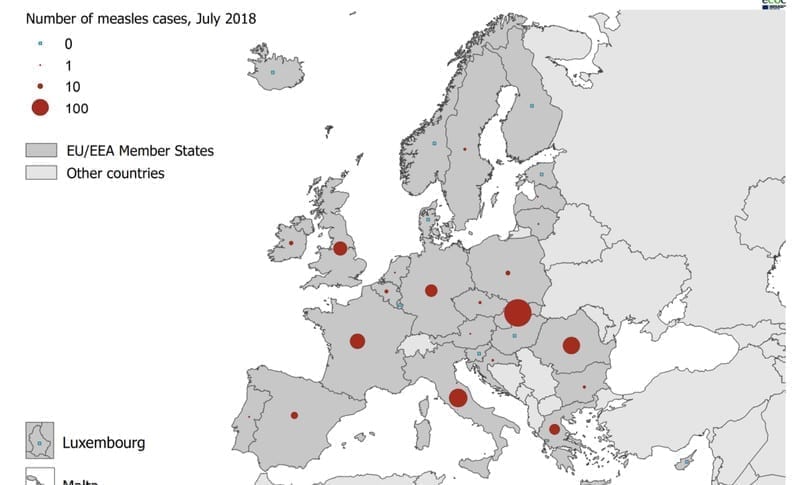 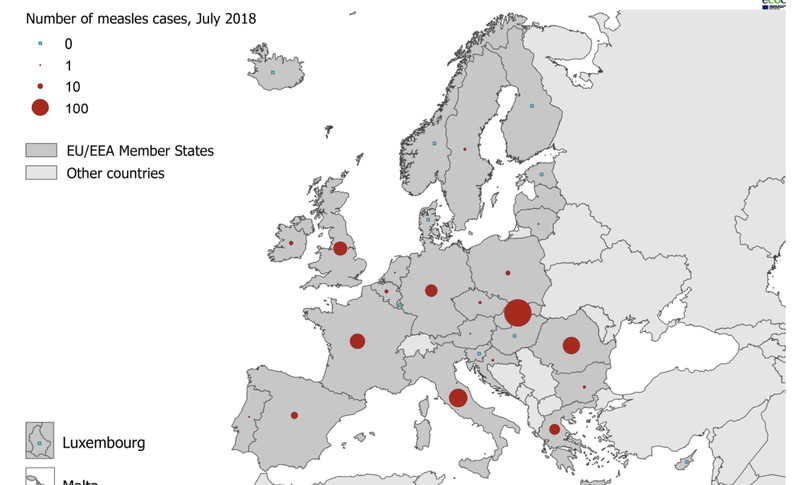 Measles can be deadly (34 people died in Europe in the first half of 2018). It’s also one of the most infectious diseases known to man. A person with measles can cough in a room and leave, and if you are unvaccinated, hours later, you could catch the virus from the droplets in the air the person left behind.

The good news: We have a vaccine that’s highly effective and can prevent measles spread. So what gives?

In the press, Europe’s measles problem has been attributed mainly to parents refusing vaccines for their kids and who’ve been spurred on by the populist movement and anti-science rhetoric there. Russian trolls spreading disinformation have also shared some blame. And then there’s Andrew Wakefield, the discredited physician-researcher from Britain. With a small and fraudulent study, Wakefield helped perpetuate the myth that the measles-mumps-rubella (MMR) vaccine causes autism and ignited the modern anti-vaccine movement (even recently fanning a measles outbreak in Minnesota).

It’s true that coverage rates for the MMR vaccine have dropped in Europe. England just released new data showing a decline for the fourth year in a row.

Why austerity measures and measles go hand in hand

When describing why measles is spreading, the researchers and public health officials working on the ground in these countries talk about austerity, the economy, and failing public health systems.

In other words, an underfunded public health infrastructure may be more to blame for the uptick in measles than anti-vaxxers. “The [public health spending] cuts were mainly on prevention — like preventive clinics and also staff,” the study’s lead author, Veronica Toffolutti, a health economist at Bocconi University in Milan, told me. “Many people were not hired anymore as staff.” And without staff and services in place to vaccinate people, more people aren’t getting vaccinated, and measles is spreading.

Why vaccines are so important when it comes to measles

The measles problem that’s surfaced across Europe might mean that even more vaccine-preventable diseases — rubella, mumps, diphtheria, hepatitis — could begin to rise, since measles is typically the first to start spreading when people aren’t getting their shots.

That’s because measles is incredibly infectious and needs the highest amount of coverage to give the population something called herd immunity: In order for any vaccine to be effective, you need to have a certain percentage of people in a population immunized. This means diseases can’t spread through populations very easily, and it protects even those who aren’t or can’t be vaccinated.

With measles, 95 percent of people need to get the shot to prevent the virus from spreading. “So it’s one of the first vaccine-preventable diseases to show its face when there’s under-vaccination,” Larson said.

And many countries in Europe are under-vaccinated. “Italy, France and Serbia, for example, have lower child-vaccinations rates than Burundi, Rwanda and Senegal,” the Economist recently reported.

To boost vaccination rates, many countries in Europe have been cracking down on vaccine-refusing parents, experimenting with fines and sanctions. And, to be clear, vaccine refusal is a problem. France, for example, has one of the highest rates of vaccine skepticism in the world: According to one study, 41 percent of people there disagreed that vaccines are safe. In Germany, it’s not unusual to go into pharmacies and find homeopathic “cures” for many ailments, or even homeopathic hospitals.

“The vaccine acceptance issues are a bigger piece of the pie than they were historically,” Larson said.

But Europe’s vaccine problems are much larger than anti-vaxxers. And the story of measles may be the canary in the coal mine for an infectious diseases problem that’s even more dire than it appears right now.

Biden vows Putin “will pay a price” for 2020 interference
Mark Zuckerberg gave $75 million to a San Francisco hospital. The city has condemned him anyway.
AOC and Ilhan Omar call for Stephen Miller’s resignation over his promotion of white supremacist art...
Why the US has failed in its coronavirus response, in one Trump interview
The US is “committed” to staying in Syria — to protect oil
GOP senator shrugs off new evidence of Trump misconduct, contradicting his stance from hours earlier