Medicare-for-all won’t happen anytime soon, but Democrats should keep talking about it 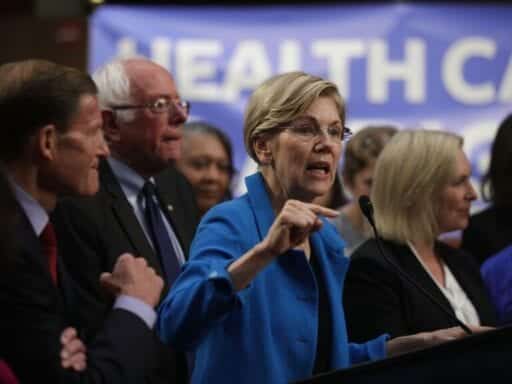 When President Donald Trump claimed that “Nobody knew health care could be so complicated,” those of us who’ve worked on health care policy stood up in unison and shouted, “We did!”

It’s a lesson the field of Democratic candidates are wrestling with, especially Sen. Elizabeth Warren, who’s been singled out to explain how she plans to finance her — or really Sen. Bernie Sanders’s — Medicare-for-all (M4A) plan. As I’ve argued elsewhere, that’s not fair, as most of the other candidates have health plans too. While they’re significantly less costly in terms of new revenues than M4A, they’re far from free. But nobody said politics was fair.

Still, is this the argument Democrats ought to be having right now, or are we, as New York Times columnist David Leonhardt recently argued, “obsessed with the wrong issue”? His well-taken point is that health care is crowding out much else, including climate, education, voting rights, and immigration.

And the obsession is intensifying as we speak. Sen. Warren just released her M4A plan, which calls for $20.5 trillion in new federal revenues over the next decade. Her cost estimate is at the low end of other such exercises, as she assumes aggressive price reductions and slower growth rates. But hers is not the lowest of the pack, and single-payer systems can squeeze costs relative to our pricy public-private hybrid. She argues, correctly, that paying for M4A involves moving private expenditures by households and employers to the public side of the ledger, leaving some folks better off on net.

With the release of the Warren plan, get ready for a flurry of wonkery around the numbers, both in terms of costs and pay-fors. But as fun as that will be for those of us who wallow in that mud, the obsession with M4A should not obscure a key point: It’s an extremely heavy lift. This time could be different, but there’s usually not much political upside to discussing the details of health care reform. I’ve advised politicians that it’s somewhere between the Afghanistan and the Hotel California of domestic policy, but many still get pulled in.

And yet why do I feel like Warren and Sanders are on the right path, talking up a policy that has so little chance of being enacted in the near term?

Passing Medicare-for-all will be a tall order

Leonhardt is right that M4A has sucked up a lot of the oxygen in the Democratic debates. That’s puzzling considering M4A faces impossibly long odds of being enacted anytime soon.

There are a few reasons for such pessimism. Getting to single-payer calls for moving some very big pieces — people and their premium payments — from one side of the board to the other. According to the Urban Institute, if the plan were in effect next year, 150 million people would have to move from employer coverage (which will no longer exist) to the government’s single-payer plan. The $950 billion employers spend on their care — not currently a tax, though with tax-like characteristics (economists Emmanuel Saez and Gabriel Zucman argue that because employer-provided premiums would otherwise be in paychecks, they’re a hidden tax) — would need to move from private into public coffers.

In addition, a large, profitable, often highly inefficient and maddening industry with 2.7 million workers — private insurance — would cease to exist. Today, payments to hospitals by private insurers are almost 90 percent higher than under Medicare. The difference in doctors’ payments isn’t as stark, but it also goes in the same direction. Some of these providers, to their great credit, are woke to the necessity of disruptive and costly change, but some aren’t, and their deep pockets fund well-connected lobbyists.

Not only must single-payer advocates fight these forces, but also they must do so, according to our incredibly cramped fiscal politics, without raising any taxes on the middle class, whoever that is. Contemporary federal tax policy is best and most simply understood as follows: Republicans cuts taxes, mostly of the wealthy, and Democrats try to raise taxes, but only on the wealthy. Most households are considered out-of-bounds, even for financing policies like M4A that would, for some middle-class taxpayers, more than offset their higher taxes through lower health insurance premiums.

Then there’s the constraint of path dependency. Often in politics, where you end up is a function of where you start. No self-respecting nation would design the provision of an expensive, essential service as we have, wherein an unregulated private sector accounts for half of the system. In fact, it’s our high health care prices, not our utilization, that makes our system so expensive. True, a few much less expensive systems (Germany, Switzerland) maintain a large role for the private sector in health care delivery, but they heavily regulate the sector, including binding price controls. I’m not saying you can’t get to single-payer from here — but here isn’t a great place from which to start.

For all these reasons, it is unlikely that the next Congress will support any sort of relatively quick transition to single-payer (that’s four years in Sanders’s bill, which I’d call very quick). This caveat holds even if Democrats flip the Senate, as the marginal vote will be a moderate who will eschew the tax hikes and disruptions outlined above.

In this regard, not only does the debate suck up a lot of airtime. Given the low legislative likelihood of both the policy and its pay-fors, it can sound a little like “we’re going to buy this unicorn and pay for it with this other unicorn.”

Politics and the moral imperative

So why do I think M4A’s supporters should keep talking about it?

For one thing, there’s nothing wrong and a lot right about presidential candidates fighting for what they believe in and explaining what that entails to highly motivated, progressive, hungry-for-big-change constituents. This is especially the case when the existing system is so clearly in need of reform. Ours is by far the most expensive health care system of the advanced economies, and yet it fails to provide universal coverage or even high-level care for many of its less advantaged constituents. Yes, we should worry about crowding out other issues, but health care is worth obsessing over.

The conversation can shift the parameters of the possible. The Urban Institute estimates that the 10-year cost of a Cadillac M4A plan that covers everyone, including undocumented immigrants, with no copays, premiums, and extensive coverage, including long-term care, requires an additional $32 trillion — 19 percent of GDP — from the federal sector (as noted above, this cost estimate is much higher than Sen. Warren’s).

But they also cost out plans that look a lot more politically plausible to me and get to near-universal coverage for far less. Their analysis of a “single-payer lite” plan, which involves income-related cost-sharing but no premiums, less-comprehensive (but still decent quality) benefits, and no coverage for undocumented persons, costs half that of the “full-Bernie” enhanced plan. Remarkably, a public-option plan that requires more cost-sharing than single payer but significantly less than current law gets to near-universal coverage for less in additional federal costs than the Trump tax cuts ($1.8 trillion over 10 years for the plan vs. $1.9 trillion for the tax cuts).

We can and should argue about this menu, and if a Democrat wins the next election, I’m sure we will. If a Republican wins, I’m sure we won’t, which is another way of saying let’s not lose the forest for the trees.

But I’m also quite certain that neither the argument nor the menu would exist without those who believe that universal health coverage in America is not just a reachable goal but a moral imperative.

Jared Bernstein is a senior fellow at the Center on Budget and Policy Priorities and was the chief economic adviser to Vice President Joe Biden from 2009 to 2011.

Whole Foods employees are worried about new owner Amazon — so they’re trying to unionize
Why Cardi B. and Megan Thee Stallion’s “WAP” is actually a public health triumph
Trump damaged the EPA. Here are 10 ways it should be fixed.
The 3 former cops who aided Derek Chauvin will also be charged with murder
Beware companies that promote “buy one, give one” charity
Michael Cohen wants to scrap the Stormy Daniels NDA