Meet Noel Francisco, the man who could oversee the Mueller probe after Rosenstein 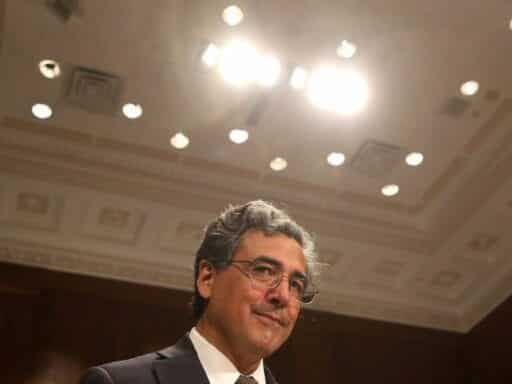 The solicitor general has argued for broad executive powers.

If Rod Rosenstein, the deputy attorney general, were to resign or be fired, Solicitor General Noel Francisco would be next in line to oversee special counsel Robert Mueller’s Russia investigation.

On Friday, the New York Times released an explosive report saying that Deputy Attorney General Rod Rosenstein suggested to other FBI officials that they secretly record Trump “to expose the chaos consuming the administration” and considered invoking the 25th Amendment to remove Trump from office.

Rosenstein is the man in charge of special counsel Robert Mueller’s investigation into possible collusion between the Trump campaign and Russia during the 2016 election. Attorney General Jeff Sessions recused himself from that role in March 2017 because of potential conflicts of interest.

And if Rosenstein leaves, the spotlight would turn to Solicitor General Noel Francisco. Francisco is the next Senate-confirmed Justice Department official in line, which means overseeing the Mueller investigation would fall to him. (The No. 3 person in the department, Associate Attorney General Rachel Brand, resigned in February; the Trump administration hasn’t picked a replacement.)

Francisco, a prominent Republican lawyer, has some impressive conservative credentials. He clerked for Supreme Court Justice Antonin Scalia and worked in the Justice Department during the George W. Bush administration.

He’s also defended a broad interpretation of executive power — he even tried to argue a case before the Supreme Court that defended the president’s expansive power to fire executive branch officials. That case is unrelated to the Mueller probe, but Francisco’s argument, and his legal interpretations, offers some insight into the man who might soon be overseeing the investigation.

Who is Noel Francisco?

The Senate confirmed Francisco as solicitor general, the lawyer who represents the government’s agenda before the Supreme Court, in September 2017 on a 50-47 party-line vote.

Francisco’s résumé includes working on George W. Bush’s legal team in the 2000 Florida recount and, as a partner at the law firm Jones Day, representing former Virginia Gov. Bob McDonnell in his successful case before the Supreme Court that led to McDonnell’s corruption conviction being overturned.

Francisco has a sterling reputation as a conservative lawyer, but he apparently wasn’t Trump’s first choice for the job. Chuck Cooper, a well-known litigator, was Trump’s top pick, according to CNN, but he withdrew from consideration.

Eventually, the president nominated Francisco. His confirmation hearing took place the day after Trump fired FBI Director James Comey — so the issue of “loyalty to the administration” was on the minds of some Democratic senators.

In response to a written question on how he would maintain his independence from the White House, Francisco gave an anodyne answer: “If confirmed, I will provide the President, the White House, and any other entity that I am called upon to advise with candid and independent legal advice.”

Francisco’s past legal stances indicate he takes a pretty broad view of executive powers and has some skepticism about the need for special counsels.

In 2007, he testified about his views on presidential power during a congressional inquiry into Bush’s politically motivated firing of nine US attorneys. The administration had been reluctant to turn over documents or let officials testify under oath on issues related to mass dismissal of US attorneys. Bush invoked executive privilege to defend his decision.

Francisco, who by then was in private legal practice, appeared before a House committee to defend the administration. As Mother Jones reports, he criticized the idea of appointing a special counsel to investigate the Bush administration over this scandal:

“I don’t think it would be appropriate for the Department of Justice to appoint” a special counsel, he testified, explaining that “my own personal belief is that when you hand these issues off to the career prosecutors in the public integrity sections in the US attorneys’ offices in the Department of Justice, those attorneys are generally better able to assess whether a case should be pursued.”

Francisco also argued for the expansiveness of executive power, saying that conversations between administration officials, even if Bush wasn’t actively involved, could be protected by executive privilege. He didn’t say executive privilege was absolute — but he basically said it was up to the court to decide: “What the courts have said is that in the context of a criminal investigation, if there is a sufficient showing of need, it can obviate the privilege.”

Francisco’s early tenure in the Trump administration indicates his positions haven’t shifted all that much.

He argued a case before the Supreme Court that could have implications for the Mueller investigation. It involves a narrow issue of how Securities and Exchange Commission (SEC) administrative law judges are hired.

But as the Los Angeles Times reported in April, Francisco has stepped in and asked the Court to decide on a much larger question of the president’s constitutional authority to not just hire officials but fire them too:

”The president’s constitutional responsibility to faithfully execute the laws requires adequate authority to remove subordinate officers,” Francisco told the court in February. “The framers understood the close connection between the president’s ability to discharge his responsibilities as head of the executive branch and his control over its personnel. … The president’s ability to execute the law is thus inextricably linked to his authority to hold his subordinates accountable for their conduct.”

Francisco is basically saying the Constitution gives the president the authority to dismiss all officials who have power under the executive branch. That could, most conspicuously, give Trump a legal way to oust Mueller.

The Supreme Court ruled in favor of the administration, but decided the case very narrowly on the question raised about the status of SEC administrative law judges. And as legal writer Cristian Farias pointed out, Justice Elena Kagan chastised Francisco for trying to make a broader argument about presidential power.

But it’s telling that the administration took this stance and that Francisco, as the solicitor general, is making these arguments before the court.

Francisco’s approach to executive power doesn’t mean that if he takes over he’ll immediately fire Mueller, or even rein in Mueller’s mandate. But it does hint that he might be more sympathetic to the Trump administration’s stance, especially if the allegations about Rosenstein intensify the clamor on the right about the Mueller probe being biased against the president.

And yet Francisco did dine with Rosenstein and Sessions in March shortly after Trump slammed Sessions on Twitter for kicking the investigation of what Trump and his allies see as the FBI’s mishandling of the surveillance of former Trump campaign adviser Carter Page to the inspector general.

The dinner, coming as it did on the heels of the president viciously and publicly attacking his attorney general, seemed to suggest the three men had formed a united front against Trump’s assaults on Sessions and the Justice Department.

Then again, all three, Francisco included, could be fired by Trump at any time.