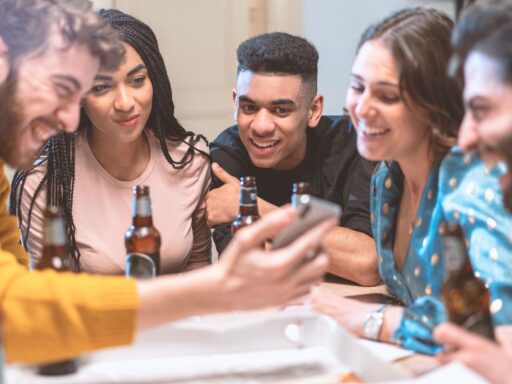 Brands like Dunkin’ and Bud Light Seltzer want to win you over with memes. Here’s what it’s like to make them.

Mac McCann had taken a beating in traditional media. At 25 years old, he had already worked in three different offices — first interning at the Dallas Morning News, before being laid off from Complex, and eventually quitting an increasingly strenuous and poorly compensated job at the Chive — and was growing fatigued by the systemic depreciation of the blogging life. McCann knew he was a capable writer, but the career opportunities in the press were increasingly sparse. That didn’t leave him many places to turn. Thankfully, there was absolution to be found — in the form of chicken wings.

In college, McCann frequently patronized the Austin-based wings-and-beer joint Pluckers Wing Bar. The restaurant had a promotion called the “Tweet of the Day,” which rewarded the pithiest comment in its @-tab with a $10 gift card. McCann was adept at generating his own bite-sized internet jokes, so he feasted on those gift cards throughout his studies. Years later, as an adult burnt out by the austerity measures carving through the press, McCann sensed an opportunity to return to his roots. In 2018, he secured a position as Pluckers’ social media strategist.

The job description is simple: make a bunch of chicken wing memes, and blast them out to Instagram, Facebook, Twitter, and TikTok. In practice, that means McCann links to a video of a frustrated LeBron James after the fifth game of the NBA Finals, and captions it: “When your man doesn’t get your wings.” He posts a clip of a jaunty horse walking on its hind legs over a squelching dubstep loop: “Me going to get my wings.” He blocks the notorious YouTube charlatan Jake Paul and tweets out the screenshot, drawing nearly 375,000 likes and an additional 100,000 retweets. McCann is happier, better compensated, and feels more appreciated than he ever felt working in the media.

“I was ready for a better salary and less stress. You don’t have to be on top of everything,” he says. “It’s like, ‘What are we doing today? Oh, we’re making memes about chicken wings like we’ve done for the last two years.’”

It’s unclear how many Americans share McCann’s job. “Chief executive memer” is not yet a formalized role in the marketing industry; few people are hired to make Galaxy Brains and nothing else. But it is indisputable that brands are valuing memes as a crucial part of their marketing portfolio. So many major companies are attempting to create virality through shitposting — a catch-all term that refers to the unpolished, chaotic sense of humor that dominates the average teenager’s social feeds. Popeye’s, Chick-Fil-A, and Boston Market kicked off a shade-laden Twitter war over chicken sandwiches in 2019. Hims, a male-focused self-care startup, is advertising their anti-hair loss products through the power of Austin Power stills on Instagram. Slim Jim photoshopped its namesake beef stick into the black robes of death: “You have been visited by the Slim Reaper, ignore to relive 2020.”

It’s a tactic so popular and a “cool job” so sought after by the youth that, in a social media ouroboros, the very idea of a meme maker offered one brand an avenue for internet clout. In August, Anheuser-Busch posted a splashy job listing looking to bring on three creatives to make “fire” Bud Lite Seltzer-themed image macros. But, the offer wasn’t full-time, and only consisted of a three-month, $15,000 contract. As food writer Dave Infante points out in his newsletter, it’s difficult to call that position a “job,” considering that it includes no health care coverage, and asks hirees to forfeit any IP ownership of their work.

Instead, the most successful agents in the business are the proprietors of highly trafficked Instagram meme pages, like FuckJerry or GrapeJuiceBoys, who routinely take brand deals to create what can only be described as “sponsored memes.” This was best illustrated during the 2020 primary, when the Mike Bloomberg campaign canvassed prominent social media junctions with ersatz, pro-Mike material. For example, Bloomberg quoting a 2004 song by The Game. But outside of the hired guns and social media talent brought in-house by big brands (Netflix, for example, has a dedicated team culled from online stars,) many professional memers are young people who earned a run-of-the-mill job in social media management, and slowly convinced their bosses that there is a bounty of influence for any company willing to turn their digital presence over to the forces of chaos.

In McCann’s case, that meant grinding away at the institutions until he had the credit to do whatever he wanted. When he walked into Pluckers headquarters for the first time, he found a wing restaurant toying with a web humor that hadn’t yet internalized the style guide of modern Twitter anarchy. “It took me a while to convince them to embrace shitposting,” he says. McCann has since spangled Pluckers social feeds with the same aesthetic he uses on his personal account; no punctuation, all lowercase letters, equipped with a hair-trigger ability to react to every microtrend on the timeline. (For instance, he’s already offered the Pluckers’ interpretation of the “How It Started/How It’s Going” format.)

McCann isn’t trying to sell wings, he’s trying to convert Pluckers into a fixture of the ambient internet — one of those accounts that’s intermittently retweeted into American life, even if the nearest location is three states away. According to McCann, Pluckers has doubled, and even tripled, each of the restaurant’s various social media follower counts since he took the reins.

“We’re not competing against WingStop and Buffalo Wild Wings. We have to get your attention from whatever political stuff is going on, from whatever funny dog video is going around. Barstool. Buzzfeed. The Onion. Whatever it is that’s getting your attention,” he says. “We have to do what we can to get three seconds of your time.”

Most professional memers cut their teeth on the vicious fields of civilian shitposting, where every tweet — if deployed correctly — can open the doors to internet superiority. According to McCann and others we spoke to, they carry that same instinct to their day jobs; they exist in a constant state of performance, and become paranoid, depressed, and insecure when it has been too long since they’ve blown up the timeline with a perfectly salient tweet. McCann tells me he’s in the middle of a virality slump — it’s been a minute before one of his Pluckers tweets went truly nuclear — and as far as he’s concerned, there is no longer a palpable difference from his personal brand and his chicken wing jokes.

“When people tell me I made a bad joke on my personal Twitter, it’s like, ‘Yeah I know, I’m chilling.’ But when someone tells me I made a bad Pluckers meme, it’s like, you’re attacking my money there. I take it more personally,” he says. “If I blow up on my own, it’s cool, but my life doesn’t change at all. There’s no monetary benefit. But if I go viral on Pluckers, I can go to my boss and say, ‘Hey, we did good numbers.’”

Marketing is traditionally understood to be an indeterminate field — it’s impossible to know for sure how much car insurance the Geico cavemen sold — and the guesswork only gets more unwieldy when we’re talking about a relatively new medium like internet memes. But Joe Gagliese, the co-founder of the influencer agency Viral Nation, is a believer. His company represents hundreds of different meme pages, and has organized countless deals between companies and image macro savants. (Some of Viral Nation’s past clients include the video game PUBG Mobile, and the dating app Hinge.)

Gagliese tells me that meme-based advertising opens up a whole new dimension of awareness for any brand willing to put up the money, because — ironically — shitpost marketing has a far more detectable impact than billboards or TV spots. “If you give a brand a million impressions [on a meme,] those are individual people that you know saw the content,” says Gagliese. “We can track sales through swipe-ups on Instagram Stories or Facebook meme pages. We can track the clickthrough conversion on those channels.”

Argue in the comments. National Coffee Day is National Dunkin’ Day! Get a FREE medium coffee with any purchase today only at @Dunkin #sponsored

One national brand currently trying to capture the thunder is Dunkin’, which unleashed a smattering of Instagram meme page ads in September to celebrate “National Dunkin’ Day.” Like McCann’s work with Pluckers, the company has adopted the language tics of the Logged On Generation wholecloth. “Who would win? Chilly boy? Steamy boy?” posted GrapeJuiceBoys, underneath images of an iced and hot cup of Dunkin’ coffee. According to Joslin Higgins, senior media manager at Dunkin’, it’s a priority to allow their collaborators to meme “in their own voice.” They believed that “chilly boys” would resonate with their customers with “authenticity and relevance.” It’s occasionally whiplash-inducing to see wholesome branded shitposting stacked up against the darker, stranger, more turbid inclinations of the average meme page — there is a clinical depression joke two entries above the Dunkin’ post on GrapeJuiceBoys’ grid — but that also seems to be the point.

“Memes offer a valuable experience to consumers,” says Higgins. “A sense of being understood, some comedic relief.”

One of the pages that made a sponsored Dunkin’ post was Sonny5ideUp, which is run by an anonymous, legendary artist who goes by Sonny. They’ve taken sponsored deals since 2015 and are responsible for a daily deluge of handcrafted, deeply nihilistic memes. (Their Dunkin’ post reads, “Not to get political but, hot or iced?”) I was curious to know if Sonny bleeds for his corporate memes in the same way that someone like McCann does. Do they take it hard when a promotional shitpost flops? Does memeing for Dunkin’ ever make them feel like a fraud? Not at all. If anything, Sonny is perfectly content with his mercenary status. “I’m a sell out, and that’s fine with me at this point,” they tell me. In the absurd, gleefully derisive world of pro meming, accepting a check for a shitpost is just an extension of the joke.

“Sometimes they ask me to give them an estimate of how much engagement the meme will get and I just say I can’t guarantee anything,” continues Sonny. “I do want what’s best for the brand but I see it as work and it doesn’t bother me if an ad post doesn’t perform, especially when they didn’t approve the much better memes I made. If you’re coming to me for memes I don’t see the point of filtering them down.”

Still, everyone I interviewed for this story believes that their small corner of the marketing industry will continue to propagate in the years to come. The upside is too difficult to pass up. In 2020, it’s impossible to participate in the global salon if you’re not shitposting. That’s true for our elected officials, our football teams, and our fast food restaurants. The public has little use for a brand’s Twitter account if it’s unwilling to get down and dirty with the masses. We used to log on for coupons and patient customer service; now we log on to see the person running the Kum & Go feed photoshop the 12-foot tall skeleton towering over one of their suburban locations. “It’s so fundamental to the way we communicate on the internet,” says Ariel Rubin, the man behind that post. “Having a really successful meme person, or meme chief, or meme specialist, whatever you want to call it, is brilliant.”

“I think every company in the next six to 18 months will start doing it,” he finishes. “Because it’s how you connect.”