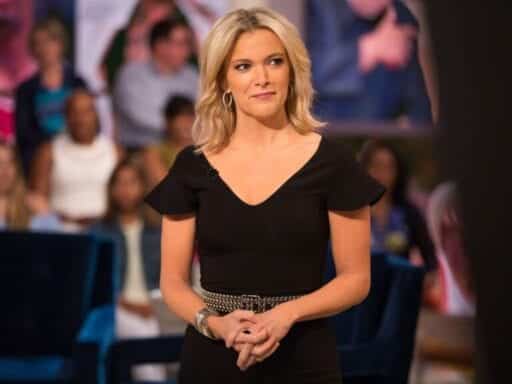 On Tuesday afternoon, Kelly apologized for defending blackface. Her comments still show why it remains prevalent.

TV host Megyn Kelly defended blackface during her NBC television show Tuesday morning, serving as a catalyst for this year’s version of an annual debate over race and Halloween costumes.

“Back when I was a kid, that was okay just as long as you were dressing as a character,” she said.

Megyn Kelly wonders what the big deal is about blackface pic.twitter.com/07yvYDuAYe

Other panelists attempted to explain that blackface is offensive, but Kelly didn’t back down, pointing to Real Housewives of New York cast member Luann de Lesseps, who was heavily criticized for dressing as Diana Ross last year. (De Lesseps apologized for the costume, but argued that she did not darken her skin.)

“She dressed as Diana Ross and she made her skin look darker than it really is,” Kelly said. “And people said that was racist, and I don’t know. I thought, like, who doesn’t love Diana Ross? She wants to look like Diana Ross for one day? I don’t know how that got racist on Halloween,” the host said.

“I can’t keep up with the number of people we’re offending just by being normal people,” Kelly said as the segment came to a close.

Kelly’s comments were immediately criticized on Twitter, with celebrities like actor Patton Oswalt and Top Chef host Padma Lakshmi arguing that the remarks showed that Kelly was ignorant about the history of blackface. The panel discussion did not include any discussion of blackface’s roots in racist depictions of black Americans or how it has been historically used to dehumanize black people.

Because @megynkelly: minstrelsy is the basis for the coining of the term “Jim Crow” laws which served to humiliate & target Black Americans. Because caricaturing another race perpetuates the dehumanization of POC who are being killed & jailed at a disproportionate rate in the US https://t.co/xk2RAr2Kxq

On Tuesday afternoon, Variety reported that Kelly sent an internal email to her colleagues apologizing for the remarks, adding that the intense backlash led her to reconsider her stance.

“I realize now that such behavior is indeed wrong, and I am sorry. The history of blackface in our culture is abhorrent; the wounds too deep,” Kelly wrote. “ I’ve never been a ‘pc’ kind of person — but I understand that we do need to be more sensitive in this day and age. Particularly on race and ethnicity issues which, far from being healed, have been exacerbated in our politics over the past year.”

Kelly’s initial comments raised a debate about blackface that seems to emerge annually around Halloween, where defenders argue that the practice is not offensive. This argument assumes that intent and impact are the same thing, and also ignores that blackface is deeply rooted in a history of casting African Americans as inferior.

As Jenée Desmond-Harris explained for Vox in 2014, blackface dates back to minstrel shows in the mid- to late 19th century. White actors (and later some black actors as well) performed exaggerated and highly racist caricatures of black people. This depiction presented a dehumanized image of African Americans, who at the time were disenfranchised and denied basic rights under racial caste systems like Jim Crow laws.

“Against the backdrop of a society that systematically mistreated and dehumanized black people, they were mocking portrayals that reinforced the idea that African-Americans were inferior in every way,” Desmond-Harris wrote.

These portrayals were part of a system that painted African Americans as deviant and therefore deserving of subpar treatment. The same attitudes that rationalized blackface rationalized poll taxes, lynchings, and segregation — issues that have shaped black life in America to this day.

Because of this, blackface is widely regarded as “nothing but a continuation of defining a people as less than,” Terence Fitzgerald, a professor at the University of Southern California, told the Root in 2017, adding that the depictions cast black people as “as this deviant group, sexualized group. Ignorant. Dumb. Depraved. All of those sorts of adjectives. It’s just a way to keep that alive.”

Arguments like the one Kelly made on Tuesday attempt to position this historical, offensive use of blackface or costumes depicting stereotypes of other ethnicities, as distinct from simply dressing up as celebrities. But this ignores that the costumes still serve as a vehicle for racial dress-up, and that the stereotypes that blackface relied on in the past are still present today.

“In many ways, one’s intent is irrelevant,” David Leonard, an associate professor in comparative ethnic studies at Washington State University, told Vox in 2014. “The harm, whether it’s harm in terms of eliciting anger, or sadness, or triggering various emotions or causing [black people to feel] both hyper-visible and invisible at the same time, is there. When someone says, ‘I didn’t mean it that way,’ well, their real question should be not ‘Did I mean it?’ but, ‘Am I causing harm?’”