Melania Trump finally gave an explanation for her “I don’t really care. Do U?” jacket 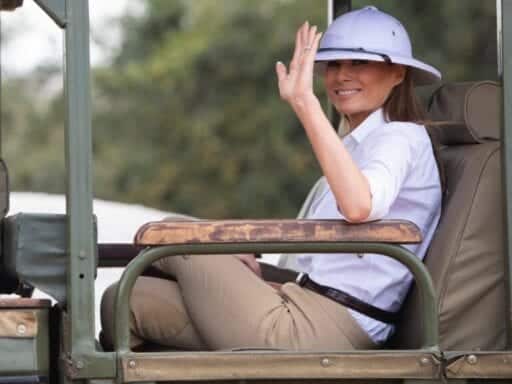 During an ABC News interview, the First Lady discussed why she wore that infamous jacket to visit migrant children in Texas.

In a taped ABC News interview that aired on Friday night, Melania Trump discussed her biggest style misstep: wearing a military jacket from Zara with the words “I really don’t care, do u?” printed on the back to visit detained migrant children.

The Trump administration had already faced considerable backlash for separating migrant children from their parents at the time of the June visit, and critics said the jacket signaled that she did not care about the children’s welfare.

After the visit, her spokeswoman Stephanie Grisham reportedly said, “There was no hidden message. After today’s important visit to Texas, I hope this isn’t what the media is going to choose to focus on.”

Trump similarly downplayed the incident during her ABC interview with Tom Llamas. “It’s obvious I didn’t wear the jacket for the children,” she said. “I wore the jacket to go on the plane and off the plane.”

But she didn’t deny that she was trying to send a message with the garment.

“It was for the people and for the left-wing media who are criticizing me,” she said. “And I want to show them that I don’t care. You could criticize. Whatever you wanna say, you can say. But it will not stop me to do what I feel is right.”

Trump said that once she realized the press had criticized her fashion choice, she intentionally put the jacket back on as she left the Texas detention center.

“After the visit, I put it back on because I see how media got upset about, obsessed about it,” she said. “They got so obsessed. And I said, like, you know what, that’s what I’m talking about.”

Her statements echo what President Trump tweeted shortly after the incident took place. He too said she wore it to point the finger at the press.

Much like her husband, the first lady seems to view herself as an unfairly treated media target — but wearing the jacket only led to more scrutiny from the press, and from the public. “You know,” she told Llamas, “I often asking myself if I did not wear the jacket, if I will have so much media coverage.”

The former fashion model also said she wants reporters to expand their coverage beyond her clothing.

“I would prefer that they focus on what I would do and on my initiatives than what I wear,” she said.

Melania Trump tells @TomLlamasABC she wore the ‘I really don’t care’ jacket “for the people and for the left-wing media who are criticizing me. And I want to show them that I don’t care.” #MelaniaTrump https://t.co/ZOcFC8ZwX3 pic.twitter.com/WDqqXBUmwL

But for the most part, Trump has been a quiet presence as first lady, even moving into the White House months after her husband did. Her initiatives have been limited to the Be Best anti-bullying campaign she launched in May. As a result of her muted role in the administration, both the mainstream and conservative media have focused on her clothing, her primary form of self-expression.

The latest round of sartorial criticism came last week during the first lady’s trip to the African nations of Egypt, Kenya, Ghana, and Malawi, during which she wore safari-style pieces. The Ralph Lauren jacket, pants, and blouse she wore in Egypt were compared to an ensemble worn by a Nazi sympathizer character in Raiders of the Lost Ark. Trump also stepped out in a pith helmet, headgear linked to British explorers and colonial administrators in Africa.

Melania Trump’s stylist Herve Pierre told WWD that her style is “not that complicated.” Quoting designer Carolina Herrera, he said, “‘Fashion is to please your eye.’ If you start to intellectualize everything, it’s hard.”

During an administration that has arguably ushered in a wave of anti-intellectualism, Pierre’s comment can feel especially true, but it doesn’t mean Trump’s choices aren’t without consequence. If the first lady thought a bit more about the implications of her attire — from high heels worn during a visit to hurricane-ravaged Texas to a pussy-bow blouse worn after her husband’s predatory use of the word sparked outrage — she might actually get what she wants: a press that pays less attention to what she wears.

Women with endometriosis suffer terrible pain. There’s finally a new treatment option.
More teachers are turning to crowdfunding sites to pay for books, supplies, and field trips
Elizabeth Warren confronts Trump nominee for her role in family separations
Why Jared Kushner reportedly wants Trump to stand by Saudi Arabia
Calling health care workers “heroes” erases just how terrified and exposed they really are
The best $2,000 I ever spent: many, many rounds of bingo