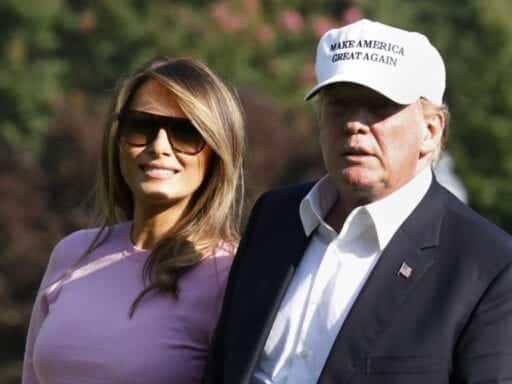 The images were only supposed to be used for positive coverage, according to NBC News.

Melania Trump raked in six figures in royalties from photos that some news organizations used in coverage of the first lady. The photos came with a requirement that they only be used in “positive coverage.”

NBC News’s Andrew W. Lehren, Emily R. Siegel, and Merritt Enright report that President Donald Trump’s 2017 financial disclosure forms revealed that Melania Trump had earned between $100,000 and $1,000,000 from Getty Images, a photo agency that many news outlets (including Vox) use to illustrate stories.

The royalties came from a series of more than 180 posed photographs, which were shot by Belgian photographer Regine Mahaux between 2010 and 2016. The photographs are posed shots and portraits of Melania, often with her husband and their son Barron. They’ve also been featured on a few magazine covers. The photographer, Mahaux, also took Melania Trump’s official White House portrait.

The big caveat about this arrangement, according to NBC News: Agencies were only allowed to use the photos for positive coverage. According to NBC News, Getty included that requirement in its catalog. But it doesn’t seem as if it were made obvious to the news organizations that Melania Trump would be getting a cut of the photo revenue herself.

A lot of news organizations apparently used these photos at some point, including NBC News itself. Yahoo News, the Daily Mail, and the Houston Chronicle are among the publications that used these photos while the Trumps were in office. Some of the photos were also used prior to 2017, but how much the Trumps earned from them isn’t clear as it wasn’t itemized on the financial disclosure form. (According to NBC News, some news organizations have now removed the images.)

The whole story is strange for two reasons. First, it’s odd for news organizations would use photographs that came with any strings attached to its coverage — though it’s not clear how closely that rule was followed.

Second, most subjects of photographs don’t get to take a share of the profits — at least not if they’re politicians or public figures. (Other celebrities sometimes receive royalties for their images, according to NBC.)

Getty Images told NBC News that confidential agreements dictate the terms of the deal. The White House said in a statement that Trump’s financial disclosures — which included this detail about the photo royalties — was certified by the White House Ethics Counsel and Office of Government Ethics.

This photo deal adds to the list of ethics concerns about the Trump administration, and whether the president and those in his orbit are profiting from his presidency. Trump is currently being sued over whether he’s in violation of the Constitution because his businesses, including his DC hotel, accepted payments from foreign governments. Other transactions have raised eyebrows, including the approval of Trump trademarks in China, and Ivanka Trump and Jared Kushner’s combined $82 million in outside income in 2017 — and raised questions about potential conflicts of interest.

Trump responds to Apple’s warning tariffs will increase prices: Build more in the US
“Without it, we are flying in the dark”: Why the US needs better coronavirus testing, fast
Coronavirus stimulus checks are on the way — if you haven’t gotten one already
Watch our new show Answered on Quibi
Supertrees: Meet Indonesia’s carbon guardian
J.K. Rowling’s latest Robert Galbraith novel is addictive, murderous fun