Melania Trump wears “I really don’t care, do u?” jacket on trip to migrant children 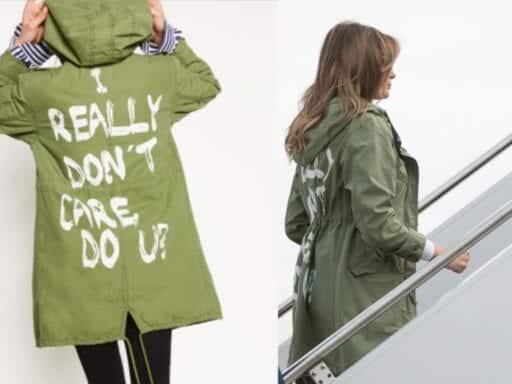 Her spokesperson says the $39 Zara jacket had “no hidden message,” but Trump tweeted otherwise.

While boarding an Air Force plane to visit migrant children at the Texas-Mexico border on Thursday, Melania Trump wore a jacket with the phrase “I really don’t care, do u?” scrawled on the back.

It’s a bizarre and insensitive choice both for the nature of the occasion and in a cultural moment where public outrage for Trump’s “zero tolerance” family separation policy is fervid and widespread.

Though the first lady arrived at Andrews Air Force base in Maryland wearing the jacket, by the time the plane landed in McAllen, Texas, she had changed into a far more innocuous cream colored jacket instead.

In a rather brazen move, however, she changed back into the jacket upon landing back in Maryland later in the afternoon, despite the swift criticism and the fact that the temperature was 81 degrees. This time around, photographers were also given full view of the offending garment.

The jacket isn’t only notable for its seemingly offensive phrase — it’s notable because the first lady has a tendency to wear exclusively high-end designers like Dolce & Gabbana and Valentino when she appears in public. Instead, the green army jacket is made by fast-fashion behemoth Zara, cost a mere $39, and also happens to be a favorite of young fashion bloggers.

This isn’t the first time Melania Trump has caused controversy with her wardrobe choices. She famously wore stiletto heels while traveling, coincidentally, to Texas previously to survey the damage from Hurricane Harvey. (On Thursday, however, she wore Adidas Stan Smith sneakers.)

While in McAllen, the first lady toured two facilities: the Ursula Border Patrol Processing Center, where the Customs and Border Patrol keep migrant families for a few days; and the Upbring New Hope Children’s Shelter, run by the Health and Human Services Department, which currently houses about 60 children ages 5 to 17 from Honduras and El Salvador. Six of those children were separated from their parents, while the rest arrived as unaccompanied minors, according to a senior administration official.

Trump’s spokesperson Stephanie Grisham addressed the jacket, when asked. “It’s a jacket,” she reportedly said. “There was no hidden message. After today’s important visit to Texas, I hope this isn’t what the media is going to choose to focus on.”

For what it’s worth, the president does not seem to agree with this assessment:

Indeed, it’s hard to believe that nobody involved — Melania herself, her stylist Hervé Pierre, or her spokesperson — couldn’t have foreseen the backlash to such a jacket. Yet in an administration characterized by equivocation and outright falsehoods, it’s not that surprising to hear that it’s hoping people ignore a statement that’s literally printed on a jacket.

Plus, in an essentially infinite world of fast-fashion jackets, why wear one that implies you don’t care about the issue you’re on your way to deal with?