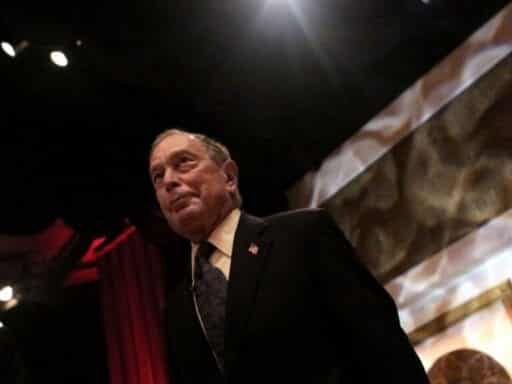 After years of back and forth, former New York City Mayor Michael Bloomberg is finally going to make a White House run.

Michael Bloomberg has finally decided to run for president, after a years-long game of will-he-or-won’t-he.

On Sunday, the 77-year-old billionaire philanthropist, media magnate, and former New York City mayor officially announced he will campaign to win the White House in the Democratic primary. Earlier this month, rumblings began that Bloomberg would finally pull the trigger after he started to register to get on the ballot in multiple states. He further fueled speculation when he apologized on November 17 for his mayoral administration’s stop-and-frisk policy, after declining to do so for years.

It’s been a long road to get here. In March, Bloomberg said he wouldn’t run for president. He also publicly ruled out an independent bid back in 2016. But now, he’s going to go for it after all.

“I’m running for president to defeat Donald Trump and rebuild America,” Bloomberg said in a Sunday statement. “We cannot afford four more years of President Trump’s reckless and unethical actions. … If he wins another term in office, we may never recover from the damage.”

In the face of the rise of progressive candidates like Sens. Bernie Sanders and Elizabeth Warren and the perceived weakness of former Vice President Joe Biden, Bloomberg appears to be tossing his hat in the ring as a moderate alternative. Though he switched his affiliation back to the Democratic Party in 2018 after years as a Republican and independent, that doesn’t mean he’s all-in on the progressive issues other Democrats are embracing, as I noted earlier this month:

He is a champion of gun control and addressing climate change, but he has criticized Medicare-for-all as unaffordable and said Warren’s proposed wealth tax is likely unconstitutional. He has expressed optimism about the Green New Deal and said all of the concepts in it deserve consideration, but warned that it should not put forth “things that are pie in the sky.” He is viewed as a more Wall Street-friendly, centrist candidate.

Bloomberg’s run hasn’t been met with, say, the most open arms among the Democratic base. A Morning Consult poll conducted soon after the Bloomberg buzz started earlier this month found that just 4 percent of Democratic primary voters would pick the former mayor as their first choice to be the party’s nominee, behind Biden, Sanders, Warren, Pete Buttigieg, and Kamala Harris. In a head-to-head poll with President Donald Trump, Bloomberg did have a lead over the current president, as did Warren, Sanders, and Biden.

Other candidates have criticized Bloomberg over weighing entering the race and held him up as another example of a billionaire trying to exert too much influence over politics, as Riley Beggin laid out for Vox:

Sen. Bernie Sanders, who was campaigning with one of his key surrogates — Rep. Alexandria Ocasio-Cortez — in Iowa, told supporters, “You’re not going to buy this election by spending hundreds of millions of dollars on media in California.”

Ocasio-Cortez later told reporters, “They’ve got class solidarity. The billionaires are looking out for each other. They’re willing to transcend difference and background and even politics.”

Sen. Elizabeth Warren, who has called for taxing assets over $1 billion at 6 percent, also skewered Bloomberg following reports of the call, writing on Twitter, “One billionaire calls another billionaire and asks him to run for president — I’m shocked!” She also linked to a wealth calculator showing how much billionaires would pay under her proposed wealth tax (there’s a button where visitors can choose to be Bloomberg, among others).

Biden told reporters prior to Bloomberg’s announcement that he has “no problem” with him getting into the race. “In terms of he’s running because of me, the last polls I looked at, I’m pretty far ahead,” he said.

Of course, not everyone was so turned off by the idea of a Bloomberg run — including, and perhaps especially, many of those in the same tax bracket. Hedge funder Leon Cooperman, who has been publicly feuding with Warren, told CNBC he would back his fellow billionaire. Recode’s Jason Del Rey reported that Amazon CEO Jeff Bezos had put in a call months earlier to ask Bloomberg if he would make a White House run.

Ben White at Politico reported that many on Wall Street have an affinity for Bloomberg but were well aware his candidacy was a long shot, to say the least. White quoted one senior Wall Street executive saying it is “ridiculous” for him to think he can win the Democratic nomination. “I think he could wish on a star that the process is different,” the executive said. “But it’s not.”

Bloomberg’s presidential bid may have the opposite of the effect he intended — namely, boosting progressive candidates such as Warren and Sanders and eating up support from moderates like Biden and Buttigieg. Vox’s Matt Yglesias laid out the issue:

The key is that in recent years, moderates who’ve successfully fended off the left wing of the Democratic Party have done so with the support of black and Latino voters, who tend to be more moderate on the whole than white Democrats. But Bloomberg’s specific political career gives him little access to this constituency and thus little hope of securing the nomination.

It appears Bloomberg is ignoring the naysayers — and probably his own data and polling — and is giving it a go after all.

The coronavirus cruise ship outbreak confirms cruises are bad
The two competing stimulus proposals, explained
Biden calls for widespread application of Defense Production Act
Trump just upended a massive coronavirus package negotiated by his own administration
You can buy a robot to keep your lonely grandparents company. Should you?
The (mostly) true story of hobo graffiti