Michael Bloomberg is probably definitely going to run for president 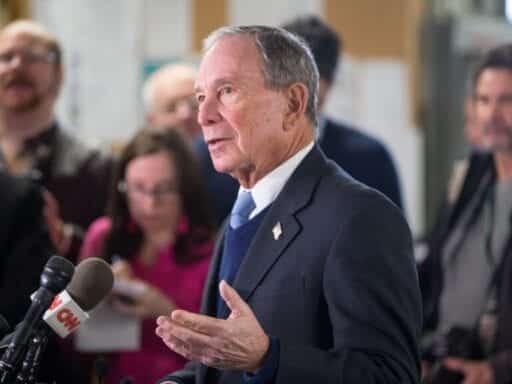 Former New York City Mayor Michael Bloomberg is still inching toward a White House bid, but it’s not quite official.

It looks like Michael Bloomberg is running for president after all.

The 77-year-old billionaire philanthropist, media magnate, and former New York City mayor hasn’t officially announced that he plans to seek the Democratic Party’s nomination for the White House, but all signs point to that being the case. On Thursday, he filed paperwork with the Federal Election Commission to run for the White House in 2020.

In March, Bloomberg said he would sit the race out. But he appears to have changed his mind in the face of the rise of progressives Bernie Sanders and Elizabeth Warren and the perceived weakness of the more centrist Joe Biden.

Rumblings that Bloomberg is going to toss his hat in the ring after all have been going on for a while. Earlier this month, New York Times first reported that Bloomberg was flirting with the idea of a presidential bid again, noting he had dispatched staffers to gather signatures in Alabama (a state with an early filing deadline) and called up prominent Democrats. He subsequently registered to be on the ballot in other states.

A spokesperson for Bloomberg explained that when he filed to get on the ballot in Alabama on November 8, that kicked off a process that required him to file with the FEC within 15 days. The spokesperson said the filing is another step toward running, but it’s not an announcement or signal of a final decision.

Bloomberg has for years been rumored to have White House aspirations, and he hasn’t kept them a secret. He contemplated running as an independent in 2016 but ultimately decided against it out of concern it might result in a Donald Trump victory. (Trump won anyway.) Though he has previously identified as a Democrat, Republican, and independent, Bloomberg switched his party affiliation back to the Democrats in 2018 and has become a backer of the party. He donated millions of dollars to Democratic candidates in the 2018 midterms.

That’s not to say that Bloomberg is going all-in on the progressive issues other Democrats embrace. He is a champion of gun control and addressing climate change, but he has criticized Medicare-for-all as unaffordable and said Warren’s proposed wealth tax is likely unconstitutional. He has expressed optimism about the Green New Deal and said all of the concepts in it deserve consideration, but warned that it should not put forth “things that are pie in the sky.” He is viewed as a more Wall Street-friendly, centrist candidate.

Bloomberg is entering the race late compared to everyone else — several candidates have already dropped out. It’s not clear whether he has a real path to victory or will be successful in competing with other moderates in the field, but he seems to be going for it anyway.

Bloomberg was born in Boston and grew up in the surrounding area before attending college at Johns Hopkins University and later Harvard Business School. He subsequently joined Wall Street brokerage Salomon Brothers but after more than a decade at the firm was laid off after it was acquired — with a $10 million severance. In 1981, he used that money to launch what would eventually become Bloomberg LP. The company initially sold computer terminals with financial information to Wall Street and has now expanded to become a media and technology giant with some 19,000 employees.

He was a Democrat before his 2001 mayoral run, but switched to the Republican Party for his bid and subsequently won. He became an independent in 2007 and served three terms as mayor.

Since leaving city hall, Bloomberg, who is worth an estimated $52 billion, has dedicated his time to Bloomberg Philanthropies, an organization that encompasses all of Bloomberg’s charitable giving and focuses on five main arenas: public health, the environment, education, government innovation, and arts and culture. The Chronicle of Philanthropy listed Bloomberg as the second-most generous philanthropist of 2018, behind Jeff and MacKenzie Bezos. He gave $1.8 billion to his alma mater, Johns Hopkins, in 2018, which as Vox’s Dylan Matthews explained, while nice, is a sort of wasted opportunity — with that money, he could have done other things to boost college affordability.

He also returned to lead Bloomberg LP and in 2017 launched the Bloomberg Global Business Forum, an annual international meeting of world leading and corporate executives in New York City meant as a replacement for the Clinton Global Initiative.

Among his most significant public endeavors are Everytown for Gun Safety, an outgrowth of the Mayors Against Illegal Guns group he helped create in 2006, and his attention to addressing climate change.

Bloomberg spoke at the 2016 Democratic National Convention as an independent, calling Trump a “dangerous demagogue” whose presidency would be a “disaster in the making” and criticizing Trump’s business acumen. He has continued to speak out against Trump about issues such as immigration and climate change — he said he would pledge $4.5 million to support the Paris climate agreement after Trump withdrew the US from it.

Last year, he switched his party identification to Democrat again and spent about $100 million to support Democrats in the midterms. He has been clear that he believes running as a Democrat — not an independent — is the only path he sees to the White House.

“In 2020, the great likelihood is that an independent would just split the anti-Trump vote and end up re-electing the President,” Bloomberg said in a statement in January, taking a swipe at former Starbucks CEO Howard Schultz, who is mulling an independent run. “That’s a risk I refused to run in 2016 and we can’t afford to run it now.”

Bloomberg thinks there’s a path for him

Bloomberg is running as a centrist alternative to the more progressive candidates in the field and appears to be trying to occupy the space Biden and Pete Buttigieg are competing in. His entrance into the race has caused some eye-rolls — he’s swooping in late in the game, apparently to try to head off the more left-leaning candidates. But he has the money to pay for his bid, regardless of any pushback.

As a candidate, Bloomberg is likely to focus on many of the same issues he’s championed in recent years: namely, gun control and climate change. He previewed the emphasis in speeches and appearances ahead of his announcement.

During a speech in New Hampshire in January, Bloomberg talked about the need for “common sense gun laws” but was moderate in his rhetoric. “Nobody’s trying to take away anybody’s guns, but we shouldn’t be selling guns to criminals or people with psychiatric problems or minors,” he said. During the same speech, he touted his record on climate and pointed out he’s been working on the issue for more than a dozen years.

He visited Iowa in 2018 and prior to his arrival wrote an op-ed in the Des Moines Register in which he discussed the possibilities for clean energy in the state and its potential economic impact. He hosted a screening there of his new climate change documentary, Paris to Pittsburgh.

A January Politico profile laid out what Bloomberg seems to believe his path is to the White House. He won’t shy away from being fiscally moderate or fiscally conservative, but he believes that his years-long focus on two issues that matter to Democrats — climate and guns — will play well.

He will also be able to contrast himself with Trump as a more successful and savvy businessman.

That’s not to say he won’t have his fair share of problems with the Democratic base. In a generic sense, it’s not clear what sort of appetite there is among progressives for an older white billionaire to be the party’s nominee. More specific to Bloomberg, there are areas where he’s out of step with the left.

As the New York Times noted in September 2018, Bloomberg is out of line with Democrats on issues such as bank regulation, stop-and-frisk policing, and #MeToo. In an interview with the Times, he criticized progressives’ approach to big business and specifically singled out Warren’s push to break up the banks as a bad idea.

He also expressed concern about the rise in allegations of sexual misconduct against prominent figures but cast doubt on those against journalist Charlie Rose, who was ousted from CBS and PBS after reports of sexual misconduct emerged. Bloomberg said he had “never had a complaint” about Rose and was “surprised” at the reports about him. Rose recorded one of his shows in the Bloomberg office.

Despite the criticism, Bloomberg appears ready to give it a go anyway. What sort of traction he’ll gain remains to be seen.

Solving America’s painkiller paradox
Neo-Nazi who drove car into Charlottesville crowd sentenced to life in prison
RSVP now to talk Gideon the Ninth with Tamsyn Muir and the Vox Book Club
Vox Sentences: One step closer to Trump’s financial records
Tens of thousands rise up against the coup in Myanmar
The UK is the first country to grant emergency approval to Pfizer’s Covid-19 vaccine