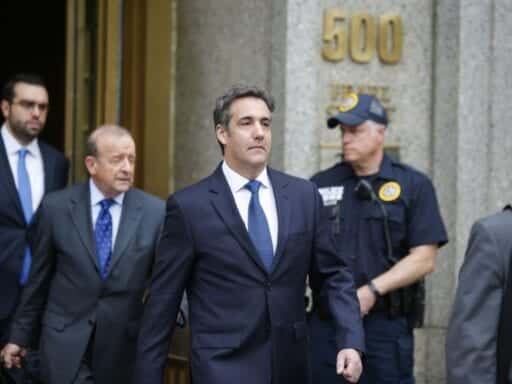 A CNN report says Cohen claims to have been present when Trump learned about the meeting in advance. And he may be looking to tell Robert Mueller.

Michael Cohen is willing to tell special counsel Robert Mueller that Donald Trump had advance knowledge of the 2016 Trump Tower meeting in which Russians offered campaign aides dirt on Hillary Clinton, sources told CNN. The president has previously denied knowing about the meeting in advance.

“Cohen alleges that he was present, along with several others, when Trump was informed of the Russians’ offer by Trump Jr.,” CNN’s Jim Sciutto, Carl Bernstein, and Marshall Cohen report. “By Cohen’s account, Trump approved going ahead with the meeting with the Russians, according to sources.”

The revelation comes as Cohen, Trump’s former attorney and personal fixer, appears to be in serious legal jeopardy in a separate investigation, and is reportedly hoping to strike a deal with prosecutors. CNN reports that sources who have discussed the matter with Cohen say he hopes this claim “will help him reach out to Mueller and possibly lessen his legal troubles.”

One potential problem, though, is that Cohen did not have his tape recorder on this time, and doesn’t appear to have hard evidence to corroborate this claim. Trump lawyer Rudy Giuliani told CNN, “He’s been lying all week, he’s been lying for years.”

The Trump Tower meeting during the summer of 2016 has played a major role in Robert Mueller’s investigation into whether the Trump campaign colluded with Russian government officials to interfere with the campaign.

Just to recap: On June 9, 2016, Donald Trump Jr., Paul Manafort, and Jared Kushner met with a Russian lawyer and four other people with Russian ties. An email to Donald Trump Jr. setting up the meeting claimed the Russian government had incriminating information on Hillary Clinton to offer. However, all parties present have claimed that nothing of significance ended up taking place at the meeting, and nothing resulted from it. (For a full recap, read Andrew Prokop’s explainer on the meeting.)

There’s been a lot of talk about Cohen potentially “flipping” on Trump, though there’s no word of him actually entering into talks with prosecutors about a plea deal just yet.

Voters in DC gave restaurant workers a raise. City lawmakers just voted to block it.
Gina Carano’s controversial firing from The Mandalorian, explained
The Tom Cotton op-ed affair shows why the media must defend America’s values
The Covid-19 relief bill has saved up to 40 million people from eviction — for now
The plaintiff of Roe v. Wade made a big revelation on her deathbed. Here’s what it means.
The $124 billion Supreme Court case that could throw the housing market into turmoil, explained