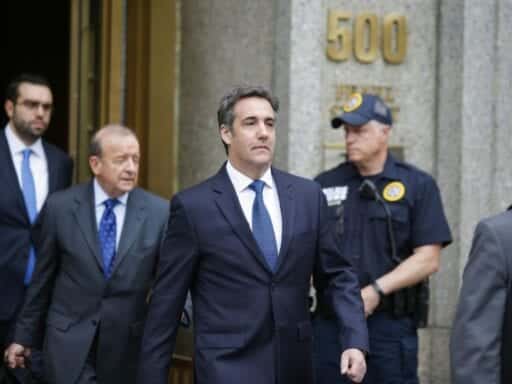 The president’s personal lawyer says his priority is his family and the country — not Trump.

Michael Cohen is sounding a lot less ride-or-die for President Donald Trump than he used to. In an interview with George Stephanopoulos for Good Morning America, his first in-depth sit-down since the FBI raided his office, home, and hotel room in April, the president’s personal lawyer said it’s his family and country that come first, not Trump.

“My wife, my daughter, and my son have my first loyalty and always will,” Cohen said. “I put my family and country first.”

Cohen, 51, has typically been fiercely loyal to Trump, going as far as to say he would “take a bullet” for the president. But it appears his tune is changing.

According to Stephanopoulos, who spoke with Cohen on Saturday evening, Cohen “strongly signaled his willingness to cooperate with special counsel Robert Mueller and federal prosecutors in the Southern District of New York — even if that puts President Trump in jeopardy.”

Cohen didn’t praise Trump in the sit-down, and unlike the president, who has often attacked investigators, Cohen said he respects the prosecutors and the process. “I would not do or say anything that might be perceived as interfering with their professional review of the evidence and the facts,” he said. Cohen also said he doesn’t like the term “witch hunt,” which Trump often employs.

When asked what he would do if prosecutors made him choose between Trump and his family, Cohen said family is his first priority. Per Stephanopoulos:

But when I pointed out to Cohen that he wasn’t repeating past vows to “take a bullet” and “do anything” to protect the president, the longtime Trump loyalist left little doubt about where he stands now, saying simply: “To be crystal clear, my wife, my daughter and my son, and this country have my first loyalty.”

In June, there were multiple reports after Cohen changed up his legal team that suggested he was considering flipping on Trump and could making a deal to cooperate with Justice Department prosecutors. Cohen told Stephanopoulos that once he understands what charges might be filed against him, “if any at all,” he would defer to his new lawyer, former federal prosecutor Guy Petrillo, for guidance. Petrillo is expected to become his lead counsel soon.

Trump tweeted in April that there’s no way Cohen would flip and cooperate, but that’s not how Cohen sounds.

Throughout the interview, Cohen distanced himself from Trump. He said he disagrees with “those who demonize or vilify the FBI,” called accepting Vladimir Putin’s denial that Russia meddled in the 2016 election “unsustainable,” and said those who attended the now-infamous meeting with Russians in Trump Tower in June 2016 made a “mistake” and used “poor judgment.”

….it means lying or making up stories. Sorry, I don’t see Michael doing that despite the horrible Witch Hunt and the dishonest media!

“I want to answer. One day I will answer,” Cohen said when asked about it. “But for now, I can’t comment further on advice of my counsel.”

You can read the full interview here.