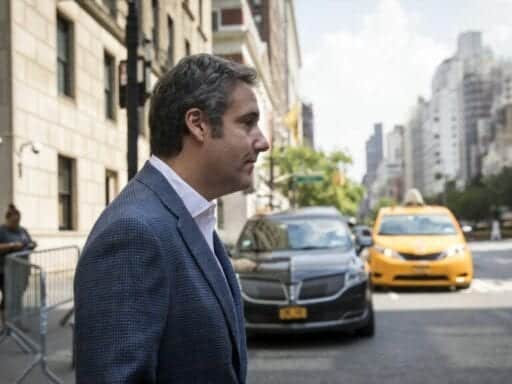 Michael Cohen stated in court that he made hush money payments “in coordination with and at the direction of a federal candidate for office” — who is almost certainly Donald Trump — “for the purpose of influencing” the 2016 election.

Cohen’s explosive revelation in court came on Tuesday when he pleaded guilty to eight federal charges, including making an illegal campaign contribution that involved a $130,000 hush money payment to Stormy Daniels during the 2016 presidential campaign.

The latter charge — one excessive campaign contribution — is related to the $130,000 payment Cohen arranged to Daniels to keep her silent about an affair she says she had with Trump in 2006. Cohen wired the $130,000 to Daniels’s lawyers on October 27, 2016.

Cohen admitted he paid Daniels the $130,000 in hush money, and he said he was reimbursed by “a candidate.” Though he did not name the candidate, it is undoubtedly Trump.

Other charges relate to hush money payments as well. The one count of making a false statement to a financial institution has to do with Cohen’s application for a home equity line of credit, which he used to get the money to pay Daniels. The one count of “willful cause of unlawful corporate contribution” from June 2016 to October 2016 relates to Cohen’s involvement in the payoff to former Playboy model Karen McDougal.

Cohen reportedly had helped arrange a deal between McDougal and American Media Inc. in August 2016. The deal wasn’t for the tabloid to publish her story, but to pay to hush it up: McDougal sold the rights for $150,000 and the promise that it would publish some of her fitness columns in exchange for her staying quiet about the alleged affair.

He also pleaded guilty to tax evasion charges, in the amount of $4 million, involving his taxi medallion business.

Cohen’s guilty plea didn’t appear to include a cooperation agreement with prosecutors, but his testimony already appears to do a great deal of damage to the president — although Trump has not been charged with any wrongdoing at this time. (And there’s a lot of debate on whether, as president, he can be prosecuted.)

The guilty plea also came at almost the same time as Trump’s former campaign chair Paul Manafort was convicted on eight counts in his financial fraud trial, though the jury could not reach a consensus on 10 of the other charges he faced.

The president has yet to comment on the guilty plea by his former personal attorney and fixer.

The penalties Cohen faces together carry a sentence of up to 65 years in prison, though he will unlikely face such a steep sentence as he’s reached a deal with prosecutors. His sentencing is scheduled for December 12, and he’s been released on $500,000 bond.

Parasite is now streaming on Hulu
A modest proposal to save American democracy
What Trump said about Covid-19 in private versus what he said in public
5 movies that explain what caused the financial crisis, and what happened after
Mexico is severely — and maybe purposefully — undercounting its coronavirus deaths
Disney+ is up to 28.6 million subscribers