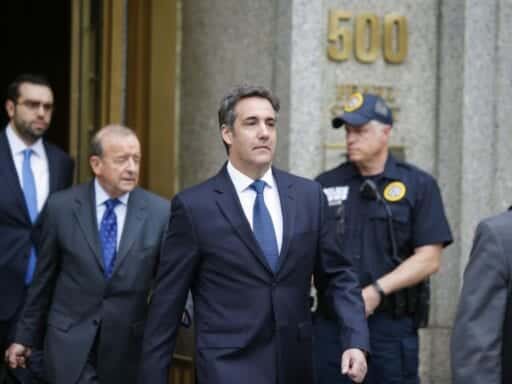 Perhaps more surprising than the news that Cohen — who remains under federal investigation — was still on the RNC’s finance leadership team at all was his rebuke of his former boss in his resignation letter.

Cohen called out the Trump administration’s policy of separating families at the border as part of its “zero tolerance” immigration enforcement, according to ABC News:

“As the son of a Polish holocaust survivor, the images and sounds of this family separation policy is heart wrenching,” Cohen wrote. “While I strongly support measures that will secure our porous borders, children should never be used as bargaining chips.”

It’s a stunning criticism from Cohen, who has billed himself as the ultimate Trump loyalist. It will likely intensify the will he/won’t he guessing game about whether Cohen is about to cooperate with federal prosecutors — and potentially flip on the president.

Indeed, Cohen reportedly cited the federal investigation as the reason he had to give up his post on the RNC. “This important role requires the full time attention and dedication of each member,” Cohen wrote, according to ABC News. “Given the ongoing Mueller and SDNY investigations, that simply is impossible for me to do.”

The FBI raided Cohen’s home, office, and hotel room in April. Federal prosecutors in the Southern District of New York are investigating Cohen, in an inquiry separate from that of special counsel Robert Mueller’s Russia probe. (Mueller referred Cohen to Manhattan prosecutors.)

There have been competing reports on just how close Cohen might be to striking a deal with prosecutors. He recently changed up his legal counsel, hiring attorney and former federal prosecutor Guy Petrillo. CNN reports that sources close to Cohen say he’s “willing to give” information on Trump. But sources close to Cohen told the Wall Street Journal Cohen would rather “eat a bullet” than betray Trump — though he would like the president to pick up his legal bills.

An RNC official confirmed to Vox that RNC Chair Ronna McDaniel accepted Cohen’s resignation and said he had been inactive on the committee for several months.

Cohen joined the RNC in 2017, according to a press release. He served alongside Elliott Broidy, who actually did step down from the RNC shortly after Cohen got raided by the FBI amid revelations that Cohen had arranged a $1.6 million hush money payment to a former Playboy model whom Broidy got pregnant. Broidy was one of Cohen’s three clients — the other two were Trump and Fox News host Sean Hannity.