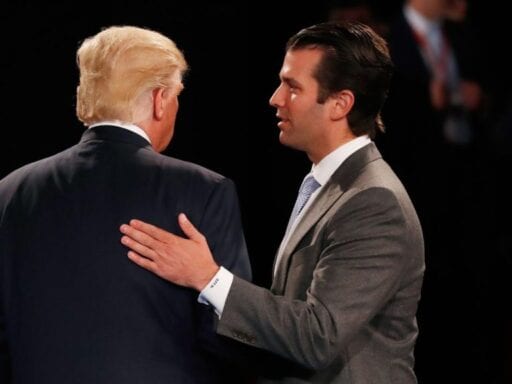 During his testimony before the House Oversight Committee on Wednesday, Cohen — Donald Trump’s longtime lawyer and fixer — testified that during the 2016 presidential campaign, he briefed Trump Jr. and Ivanka Trump about the proposed Trump Tower Moscow project about 10 times.

Cohen says he met with Donald Trump Jr. and Ivanka Trump “approximately 10” times to brief them over the Trump Tower project in Moscow https://t.co/4McXejykRV pic.twitter.com/vwEKglz9ke

But Cohen’s testimony doesn’t seem to square with what Donald Trump Jr. told the Senate Judiciary Committee in September 2017, long before Cohen was raided by the FBI and started cooperating with investigators.

Trump Jr. told Congress that he “wasn’t involved” in the Cohen-led efforts to build a tower in Moscow, knew “very little” about it, and was only “peripherally aware of it” before news coverage of the matter in 2017.

In short, he minimized his role and pleaded ignorance about the whole thing.

Lying to Congress is a crime. In fact, it’s one Cohen pleaded guilty to in November in connection with his own testimony about Trump Tower Moscow.

During that September 2017 testimony, Cohen said that discussions within the Trump Organization about Trump Tower Moscow ended in January 2016. But in November, he pleaded guilty to lying about that, and said discussions about the project actually continued until June 2016. Trump’s new personal lawyer, Rudy Giuliani, has recently suggested they may have continued all the way until October or November 2016.

Of course, the fact that Cohen has already copped to lying to Congress raises questions about the truthfulness of what he’s now saying under oath. On Wednesday, he explained the discrepancy between what he said then and now by saying, “Last time I appeared before Congress, I came to protect Trump. Today, I am here to tell the truth about Mr. Trump.”

“The lies I told to Congress benefited Trump, in furtherance of my protection of Mr. Trump,” Cohen said. “I am not protecting Trump anymore.”

COHEN: “To be clear, Trump knew of & directed the Trump Moscow negotiations throughout the campaign, & lied about it. He lied about it because he never expected to win. He also lied about it b/c he stood to make hundreds of millions of dollars. And so I lied about it too.” pic.twitter.com/wQXIpVId5W

Cohen said “Trump’s personal lawyers reviewed and edited my statement to Congress about the timing of the Moscow Tower negotiations before I gave it” — a comment that raises questions about whether Trump’s lawyers did the same thing before Trump Jr. testified around the same time.

On Twitter, Trump Jr. reacted to Cohen’s testimony on Wednesday by suggesting his father’s former lawyer is embittered he didn’t get a White House job and just wants to be famous.

And that’s what all this is about. Cohen just wants to be famous. He always wanted his own TV show and the limelight and when he couldn’t get it one way he had to try another.

Cohen also provided Congress with a copy of a March 2017 check for $35,000 that was signed by Trump Jr. and Trump Organization chief operating officer Allen Weisselberg. Cohen testified the check was one of 11 he received to reimburse him in installments for the illegal hush payment he made to Stormy Daniels on Trump’s behalf weeks before the 2016 election.

Though it’s unclear whether Donald Trump and other Trump Organization officials like Trump Jr. were aware that the payments to Daniels and Karen McDougal, another woman who says she had an affair with Trump, violated campaign finance laws that make it illegal to make an unreported donation of more than $2,700 to a candidate in a general election, Cohen acknowledged under questioning from Rep. Ro Khanna (D-CA) that the hush payments scheme is akin to a criminal conspiracy.

Gone to pieces: Trump administration hopes to track and limit the debris threatening the space indus...
Amazon now has more than 150 million Prime members across the world
So everyone’s Googling ‘bread’ now
Idaho’s legislature hasn’t addressed the coronavirus. But it has passed 2 anti-trans bills this week...
30 million Americans have lost their jobs in 6 weeks
How music has responded to a decade of economic inequality