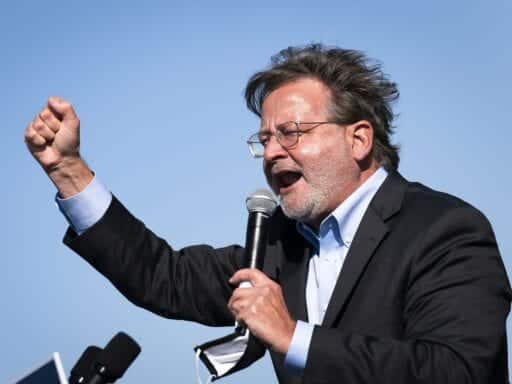 Peters’s seat was considered a must-keep for Democrats.

Democratic Sen. Gary Peters will keep his US Senate seat in Michigan after defeating Republican challenger John James in the 2020 election.

Peters was one of two Senate Democrats up for reelection in a state that President Donald Trump won in 2016, and the race wound up being a surprisingly tight one. While Peters led in the polls throughout the race, James was able to close in on him in the final months of the race, and political experts thought there was a real chance he might win.

Peters, 61, was elected to the US Senate in 2014 (he was the only non-incumbent Democrat to do so that year). He is currently the ranking member of the Senate Homeland Security and Governmental Affairs Committee and has said his top priority is job creation and the economy. He worked for 20 years as a financial adviser and has had a long career in Michigan politics, first on the local level and then national, joining the US House of Representatives in 2008.

Despite his long history in Michigan’s political sphere, Peters isn’t a super well-known figure — which wound up being part of the problem for the 2020 Senate race. As Vox’s Andrew Prokop wrote, it’s not that Peters hasn’t done a lot, it’s just that voters haven’t noticed it, or at least, they haven’t noticed him:

He has, however, racked up a record of wonky, low-profile bipartisan accomplishments — he was the lead sponsor of four bills that were signed into law under President Trump. These are a law expanding access to apprenticeship programs for veterans, a law about training programs for small businesses, a law reforming the way the government accounts for cars and laptops, and a law hiring more agricultural inspectors for airports and seaports.

Peters ranks highly as a bipartisan figure, and he touted his ability to work with others in an interview with Vox. “I’m a Democrat, I’m a proud Democrat, but I also know that we have to solve problems and we have to bring folks together to get things done,” he said.

James, 39, gave Peters more of a run for his money than expected. He has a military and business background: After graduating from West Point, he became an aviation officer and served eight years in the Army, including two in Iraq. After that, he went to work at James Group International, a supply chain management company founded by his father. He is now CEO of Renaissance Global Logistics. James challenged Democratic incumbent Sen. Debbie Stabenow in 2018 and lost.

James ran a pretty Trumpy race in 2018, telling supporters during that election that he supported the president “2,000 percent.” This time around, he has been a lot less Trumpy and a bit more willing to break from the president. During a video conference with Black community leaders, Politico reported in May, he noted he has differed with Trump on “plenty of issues.”

James said those disagreements include cutting Great Lakes funding, Trump referring to certain nations as “shithole countries,” and the president “speaking ill of the dead,” an apparent reference to the late Sen. John McCain (R-AZ). “And so yes, there’s gonna be places that I disagree with the president, and those are just a couple,” he said.

Projections ahead of the election estimated the Peters-James race would wind up costing about $100 million, rendering it Michigan’s most expensive Senate race ever. Republicans poured money into the race, recognizing the potential to flip the seat, while Democrats spent on trying to hold on to it.

Heading into the 2020 election, the Michigan Senate seat was all but a must-hold for Democrats looking to turn the US Senate blue. And Peters held on.

Aurora, Illinois, shooting: what we know
I offered free rent because of the pandemic. Other landlords should do what they can, too.
MSNBC will host 2020 Democrats — and one Republican — at the next climate town hall
The best case for withdrawing all US troops from Afghanistan
The next Democratic debate will feature a much smaller stage
Alexandria Ocasio-Cortez just won a House primary as a write-in — for a district she wasn’t intendin...