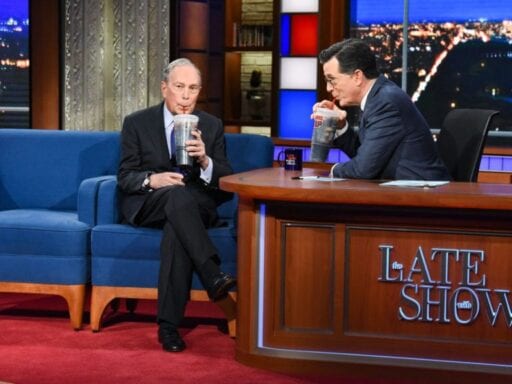 Share
Loading...
Michael Bloomberg and Stephen Colbert sip on giant sodas on the Tonight Show in January 2020, in a reference to Bloomberg’s attempt to ban extra-large sugary beverages while mayor of New York City. | Photo by Scott Kowalchyk/CBS via Getty Images

Michael Bloomberg momentum isn’t exactly happening — but it’s not not happening, either.

The billionaire philanthropist and former New York City mayor has been gradually ticking upward in state and national polls since launching his presidential bid in November. A RealClearPolitics average of polls shows him in fifth place with about 6.6 percent support nationally, just behind former South Bend, Indiana, Mayor Pete Buttigieg, at 7.2 percent.

Recent polls out of Wisconsin, Florida, and North Carolina show Bloomberg in mid-to-high single digits. One poll out this week shows Bloomberg with a 7-point edge in a head-to-head match-up with President Donald Trump in Michigan, better than former Vice President Joe Biden, Sens. Bernie Sanders and Elizabeth Warren, and Buttigieg. And a national Reuters/Ipsos poll released Thursday evening showed Bloomberg ahead of Buttigieg.

While Bloomberg isn’t a top-tier candidate, he’s also outperforming a lot of the candidates have been for the race for much longer than him, or who have already dropped out. And he’s doing it with an unconventional approach: He’s skipping campaigning in the first four primary states, focusing instead on Super Tuesday (when many states vote) and beyond, and inundating television airwaves with ads, for which he’s paying millions upon millions of dollars of his own money.

“I think we have to acknowledge that we’re in kind of uncharted territory here,” said Kyle Kondik, a veteran pollster and managing editor of Sabato’s Crystal Ball. “While I’m not going to sit here and tell you that there is some big groundswell of support for Michael Bloomberg out there, he is ticking up a little bit.”

“The gobs of money he’s spending on advertising is certainly having some effect,” said Quinnipiac University polling analyst Mary Snow. “He is trailing the frontrunner in our national poll, which is Joe Biden, but if you put it in context, he’s not far behind Pete Buttigieg in our national poll, and he is doing better than some of the other candidates who have been campaigning for a good part of 2019.”

Bloomberg isn’t really a contender for the nomination at this point, and it’s not clear if he’ll ever get there. Moreover, many candidates aren’t yet spending a lot of time or money on later states, and it’s not clear whether Bloomberg’s support will hold once that changes, or once voting begins. But he does appear to be registering with voters. The question is, where does he go from here?

You (probably) can’t buy the presidency, but you can buy yourself your way to some good polls

Bloomberg’s campaign strategy hinges on one thing: money. He’s got a lot of it — by Forbes’s estimation, nearly $60 billion) — and he’s willing to spend it on his entirely self-funded campaign.

“For Democratic operatives, it’s like the New Deal,” said Kondik.

Bloomberg’s campaign now totals about 1,000 staffers across nearly three dozen states. He has signaled he’ll keep the operation up and running through November, whoever the Democratic nominee is.

The former mayor isn’t going to be on the debate stage because he’s not accepting donations and the Democratic National Committee has an individual donor threshold (on the night of the January debate, he appeared on Late Night with Stephen Colbert). But he is hitting the campaign trail, often in states that generally don’t get a lot of attention until later in the primary season, if at all. He’s not leading the field in endorsements, but he has the backing of multiple mayors across the country and just picked up his first congressional endorser. He’s also got Judge Judy in his corner, and on the campaign trail with him.

I love our country too much to sit on the sidelines when there is so much at stake. Thanks for your support, and for joining me and Judge Judy Sheindlin on the campaign trail in Texas yesterday.

But perhaps the most notable thing that Bloomberg is doing with his money is spending it on ads. According to Politico, he has spent more than $200 million on television advertising already, and data from Democratic consultancy Bully Pulpit Interactive indicates he has spent more than $26 million on Facebook and Google ads since launching his campaign. Bloomberg and Trump both plan to air multimillion-dollar ads during the Super Bowl. In other words, if you feel like you’ve seen a lot of Bloomberg ads lately, it’s because you probably have.

All that spending hasn’t catapulted him to the top of the field, but it’s helped. Michigan State political scientist Matt Grossmann noted that beyond Bloomberg’s bump in the polls, his favorability and unfavorability numbers have improved, and he’s doing better in head-to-head matchups with Trump. “That’s quite a bit of movement,” he said.

Tom Steyer, another billionaire and former financier in the race, is testing out the same ad carpet bomb strategy as Bloomberg, and showing that it can be at least moderately effective. Two polls out of early states Nevada and South Carolina, where Steyer has been bombarding the airwaves, got him onto the debate stage in January. “You can really show that, despite what people say, they are affected by political advertising,” Grossman said.

Because Bloomberg isn’t even trying to play in the early states, we won’t know whether his unconventional strategy works until March, or even April. The last major candidate to try skipping early states was another former New York City mayor, Rudy Giuliani, in 2008. And that wasn’t successful.

Hanna Trudo at the Daily Beast recently reported that despite his enormous ad spend, Bloomberg may not be on track to get a single delegate on Super Tuesday. Under the DNC’s primary rules, candidates have to get 15 percent of the vote statewide or 15 percent by any congressional district in order to pick up delegates, and Bloomberg isn’t there yet.

“Depending on how February goes, maybe he would stand to capitalize if the race is really muddy, but I think it would be wrong to say that there’s been some big surge for Bloomberg, particularly because he has essentially unchallenged control of the political airwaves in much of the country, but the results aren’t particularly dramatic,” Kondik said.

Would it have been different if Bloomberg jumped into the race earlier? It’s impossible to know, though Steyer’s performance shows that there may be some limitations to this ad wave strategy, no matter how long you’re on the air. Also, Bloomberg isn’t generating the free media many other competitors in the race are getting, so his own ad dollars only get him so far. (Though his team’s odd Twitter tactics during the January debate turned some heads.)

Test your political knowledge:
SPOT THE MEATBALL THAT LOOKS LIKE MIKE. pic.twitter.com/CkzdgwpzdI

We also don’t know what will happen if Bloomberg starts to go negative on other candidates — besides, of course, Trump. He has been able to make at least a moderate difference in his own polling numbers with positive advertising. Could he make a dent in another Democrat’s support if he starts to run ads against them? “

“The [Bloomberg] campaign so far has been overwhelmingly positive in comparison to other campaigns,” Grossmann said. “If you start spending that much money on nationwide anti-Sanders advertising, for example, that could have a big impact, even if it does not help Michael Bloomberg. But they’ve shown no sign that they’re doing that.”

One person who’s taking note of Bloomberg — and his ad spend — is apparently President Trump, who fired off a tweet about it on Friday morning.

Mini Mike Bloomberg ads are purposely wrong – A vanity project for him to get into the game. Nobody in many years has done for the USA what I have done for the USA, including the greatest economy in history, rebuilding our military, biggest ever tax & regulation cuts, & 2nd A!

How long will essentials like toilet paper be hard to get? It depends.
9 charts that explain the coronavirus pandemic
Airlines are still flying crowded planes, and travelers are worried
Vox Sentences: A Saudi crackdown on women’s rights
BTS just landed an unprecedented spot on the Hot 100 — with virtually no radio play
Foreign policy was a loser in the Democratic debates