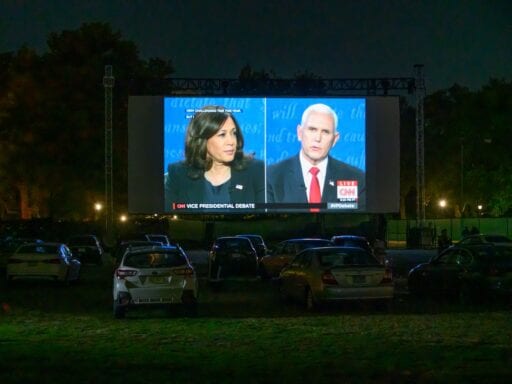 People attend a drive-in watch party for the 2020 US vice presidential debate in Queens Drive-In at the New York Hall of Science on October 7, 2020, in New York City. | Noam Galai/WireImage

Mike Pence represents the ideal: a Trump administration without the Trumpism — or Trump.

And during his debate with Sen. Kamala Harris on Wednesday, Pence attempted to play the part, often seeming to represent an entirely separate administration from the one he purportedly serves.

While Trump waxed philosophical earlier Wednesday on Twitter about how Joe Biden shouldn’t be permitted to run for office because he “got caught in a Treasonous Act of Spying and Government Overthrow,” Pence spent the debate arguing for Trump’s reelection by citing the administration’s policies on China and its fight against ISIS. After Trump dithered on stimulus payments on Tuesday before posting videos about how having Covid-19 was a godsend, Pence said that Trump was a bold leader, “a president who cut taxes, rolled back regulations, fought for fair trade, and freed up trillions of dollars to make direct payments to the American people.”

During the vice presidential debate, Pence didn’t sound particularly enthused. But there was markedly little screaming. And while he repeatedly blew past his appointed speaking times, he did not seem outwardly unhinged. In short, he did not sound anything like President Trump did during the first debate. He sounded, instead, like a standard-issue suburban Republican. And he attempted to imply that someway, somehow, the president he served might be, too.

But in doing so, Pence didn’t make Trump look good — rather, he unintentionally made the case that the problem with the Trump administration is, well, Trump. And as the president spent Thursday morning ranting about his enemies on Fox News, that case seemed to grow in strength.

Mike Pence is a “normal Republican”

Back in 2016, my colleague Ezra Klein argued that Pence’s presence on the presidential ticket rendered the very conceit of Trumpism suspicious. After all, Klein argued, If “Donald Trump is neither generic nor particularly Republican, and his whole campaign was built on the idea that even Republicans didn’t want another generic Republican,” why did he choose “a vice president who undermines everything that was distinct about his campaign”?

However, the point of Pence was not to undermine Trump’s distinctiveness, but to perhaps make it palatable, seemly, understandable. And Pence did his job. Denounced by some conservatives as a “fraud” for his alleged weakness on religious freedom issues while governor of Indiana, he nevertheless was perceived by many on the right, including congressional Republicans, as a balancing force for Trump. (After all, Pence had endorsed Ted Cruz earlier in the race.)

That was the point of Mike Pence. But, arguably, that was his greatest political weakness with conservatives for the past four years. You voted for Donald Trump, and the concept of Trumpism (whatever you believed that to be), and you just so happened to be given Mike Pence in addition.

During the impeachment hearings last October, I asked a number of conservatives why it wouldn’t be better to remove Trump from office in favor of a President Pence. I was told that Trump acted as a bulwark against the excesses of the left, and that he was the only person truly willing to fight for conservatives. In their view, Pence was a “classical conservative,” with an outlook and style insufficient to meet the needs of the moment:

Josh Hammer, editor-at-large at Daily Wire, told me, “From a traditional, Reaganite, National Review-esque ‘three-legged stool of conservatism’ perspective, Pence is undoubtedly more traditional and ‘classically conservative’ from Trump.” But Hammer said that in his view, “The right is fundamentally under siege from the left,” and so now “there is a profound desire by many on the right for a blunt, crass instrument to push back against this.” … “Trump encapsulates this mentality — a mentality that refuses to be subdued and easily swept away to the proverbial ash heap of history,” Hammer said. “And it is unclear at best if Pence could provide the same.”

But that was before the coronavirus, a pandemic that has led to the deaths of more than 210,000 Americans, an economic crisis, and the complete upheaval of the lives of everyday Americans.

If the biggest enemy of American conservatives is the left, then Trump serves an important purpose. He can rant about the culture war and serve as a glaring symbol of the right’s unwillingness to acquiesce to the supposed excesses of the left.

But if the biggest enemy of American conservatives is a pandemic that has killed hundreds of thousands of people and put the American economy into a massive downturn, then perhaps the person who spent Thursday morning demanding that a former president be charged with nonexistent crimes isn’t ideal for the job — perhaps someone like Pence is.

See, what Pence is doing tonight is what the Trump administration would look like without Twitter. And it is GOOD. VERY GOOD.

In truth, the administration would not look very different. Because rather than signaling the rise of economic populist conservatism, the election of Donald Trump ushered in four years of standard-issue Republican policymaking on a swath of issues. As I wrote after the Republican National Convention:

Rather than replace “zombie Reaganism” with a genuine populist effort — a real Infrastructure Week, for one — Trump, even with total control of Congress, demurred. It was too hard to get social conservatives, free-market libertarian conservatives, budget hawks, and foreign policy doves on board with the same domestic policies. Instead, he passed a deeply unpopular tax cut and yelled at people on Twitter. And in 2020, he’s focusing on “suburban housewives” and a capital gains tax cut that would likely benefit the wealthiest Americans.

Clearly, there are exceptions to the less-than-Trumpian Trump policy docket. Like immigration, Trump’s signature issue in 2016, and one that has gone curiously under-discussed in 2020. And trade, where Trump’s actions have resulted in a massive deficit that has expanded over his term in office. (And even on that issue, which supporters declared in 2016 was an indication of Trump’s willingness to stand with American families, supply-side economists who favor Trump are trying to change his mind.)

But overall, the Trumpism that was supposed to rattle the cage of GOP orthodoxy simply never materialized. Rather, Donald Trump became an orthodox Republican, but louder, meaner, and more conspiratorial.