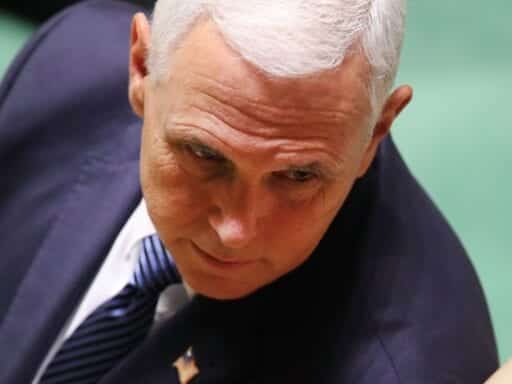 Rabbi Loren Jacobs prayed for comfort for the Pittsburgh shooting victims — and for Republican candidates to win.

In the wake of the shooting at the Tree of Life synagogue over the weekend that left 11 people dead, Vice President Mike Pence appeared with a rabbi at a campaign rally in Michigan — but the rabbi was a “Messianic rabbi” who’s part of the Jews for Jesus movement.

Pence sparked outrage when he shared the stage with Loren Jacobs at a rally outside of Detroit. Messianic Judaism accepts Jesus as the messiah and embraces the New Testament. As the Washington Post notes, the major Jewish denominations and Israel view followers of Messianic Judaism as Christian.

Many onlookers slammed Jacobs’s appearance alongside Pence as insensitive and tone-deaf in the wake of the shooting on Saturday in Pittsburgh that killed 11 people and wounded multiple others, including four police officers.

Jacobs opened his prayer by invoking “God of Abraham, God of Isaac, God of Jacob, God and father of my lord and savior Yeshua, Jesus the Messiah, and my God and father, too.” (As NBC News notes, many Messianic Jews refer to Jesus as “Yeshua.”)

He went on to lament divisions in the US, saying, “Our nation is so divided right now,” and invoked the “hate-inspired shooting” in Pittsburgh. “I pray that you would comfort all of those who are mourning because of those who were wounded and killed,” he said. “Lord, please work so that instead of division in our nation, there is unity and peace.”

Jacobs did not name the 11 victims of the Pittsburgh shooting in his prayer, but he did in his prayer for Republican politicians, including Pence, the presidential cabinet, and four Republican candidates for office. “I pray for them and for the Republican Party and its candidates so that they would honor you and your ways, that you might grant them victory in this election,” Jacobs said.

Many people on Twitter expressed outrage at the event.

Two days after the worst anti-Semitic massacre ever on American soil, the Vice President appears at an event with group whose main purpose is to proselytize to Jews & convert them to Christianity. https://t.co/x4QU9uyGDy

as a jew, let me tell you how bad it is.
jews for jesus is an evangelical group funded by the southern baptist conference, with a goal to convert jews. that’s their only mission.
and to do it when american jews are being killed just for being jews, is heinous.@vp https://t.co/zrZmhbqPbR

One Twitter pointed out that normally a rabbi would open with a prayer for the dead and list the names of the deceased — not blessings for political candidates and the vice president.

Normally, a Rabbi would open with Kaddish, a prayer for the dead – and list names of those taken. And blessings to the community at risk, Jews, immigrants, etc. Here, it is instead a prayer for Republican candidates to win on November 6 and a blessing for Mike Pence.

Pence’s team distanced the vice president, who is a devout evangelical Christian, from the decision-making process around Jacobs. Jarrod Agen, his deputy chief of staff, told NBC News that Pence had heard Jacobs give a prayer at the start of the event and invited him to the stage for everyone to hear him. He said they often have “ecumenical prayers” at the start of events that “aren’t an endorsement of any particular faith.”

Pence’s office in an email to Vox said the NBC News report was not accurate and that the vice president wasn’t present for the earlier prayer and didn’t hear it.

An aide to Pence told the Post that Lena Epstein, a Republican who is running to represent Michigan’s 11th Congressional District, had invited Jacobs, and that Pence didn’t know who he was when he invited him to “deliver a message of unity.”

Team Pence says: “He was invited by Lena Epstein to offer a prayer at the event, which he did early in the program. The VP invited him back on stage to deliver a message of unity. He was not invited by the VP’s office to speak on behalf of the Jewish community.”

Epstein in a statement posted on Twitter defended the decision, saying she is “proud” of her Jewish faith. “This was an effort of unity, yet some are trying to create needless division to suit their political goals,” she wrote.

The administration has experienced a few missteps in its Pittsburgh response

The Trump administration’s response to the Pittsburgh shooting has been, at times, imperfect.

Trump on Saturday called the shooting “anti-Semitic” and a “wicked act of mass murder” and said the incident has been “more devastating than anybody thought.”

While speaking with reporters, Trump also suggested the congregation should have had better security and noted that he believes violent events are especially tough for him.

He went ahead with a rally in Illinois on Saturday evening, despite speculation he might cancel it, because he said “evil people” can’t derail life. He falsely claimed that the New York Stock Exchange opened the day after 9/11 and joked that his hair had gotten wet during “a very unfortunate news conference.” He quipped that maybe he should cancel “because I have a bad hair day.”

White House counselor Kellyanne Conway in an appearance on Fox & Friends on Monday complained about “anti-religiosity” in the United States “that is somehow in vogue,” casting the shooting as a broader issue of religion in America instead of a glaring example of anti-Semitism.

President Trump and first lady Melania Trump will travel to Pittsburgh on Tuesday.