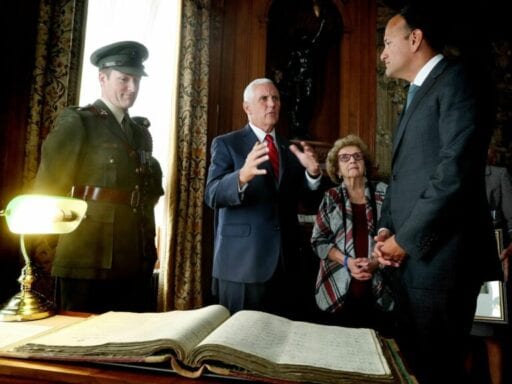 Pence’s chief of staff said they chose the hotel because the Secret Service was already familiar with it.

Vice President Mike Pence is facing criticism for choosing to stay at a Trump property — the Trump International Golf Links & Hotel in Doonbeg, Ireland — during an official trip to Ireland following a visit to Poland to honor the lives lost in that country during World War II. Pence has argued that staying at the hotel, which is 180 miles away from his meetings in Dublin, was the safest, easiest option, but his critics argue he is working to enrich the president while serving the American people.

The visit comes amid questions about members of the Trump administration spending money at Trump’s hotels; just last week, it was reported Attorney General William Barr will spend $30,000 at Trump’s hotel in Washington, DC, to throw a Christmas party.

Barr has never attempted to hide his patronage of Trump’s businesses — he has been seen dining at that same hotel, for instance — but Pence had, until this week, mostly stayed above questions of financial improprieties, having only been tangentially involved in Trump property-related incidents that appeared to raise issues of corruption (his brother, Rep. Greg Pence (R-IN) has spent more than $43,000 at Trump hotels, and the vice president himself has addressed groups that have rented space at Trump properties).

Pence’s chief of staff Marc Short told reporters Tuesday that Pence’s stay at Doonbeg was a matter of convenience and safety. The vice president wanted to stay in Dublin, where his sessions with officials are to be held, Short claimed, but an unspecified last-minute schedule change led to the decision to stay at the Trump International.

“It’s a facility that could accommodate the team,” Short said. “Keep in mind, the Secret Service has protected that facility for [Trump], too, so they sort of know the realities; they know the logistics around that facility.”

Trump also stayed at the hotel during his visit to Ireland; he tried to have a meeting with Irish Prime Minister Leo Varadkar there in May, but Varadkar refused, leading the two heads of state to meet in an Ireland airport instead.

However, Short also suggested that the decision was influenced by the man who will reap the financial rewards of the stay, President Trump — in fact, the whole thing was apparently Trump’s idea.

“I don’t think it was a request, like a command,” Short said of the president weighing in on the matter. “I think that it was a suggestion.”

Short argued the president was simply trying to make things easier and to be a bonhomous host for Pence — who made the trip with his mother, wife, and sister — given the vice president also hoped to visit relatives who live in Doonbeg.

“It’s like when we went through the trip, it’s like, well, he’s going to Doonbeg because that’s where the Pence family is from,” Short said. “It’s like, ‘Well, you should stay at my place.’”

The president did not allow the Pences to stay at his place for free, however. Taxpayers will cover the expenses of all government officials on the trip; Pence himself is paying for the family members who are accompanying him.

It is not yet clear how much the stay will cost. A review of the hotel’s reservation system showed the least expensive room averages around $300 per night; the most expensive room came in at $700 per night. At these rates, the bill could total tens of thousands.

And Pence had other options for lodging, even given his stated security concerns. There are, of course, hotels in Dublin — which has hosted presidential visits before — and the vice president could have opted to stay in London at the hotels members of the executive branch stayed at during Trump’s state visit. Pence is flying from Doonbeg to Dublin, and a flight from London to Dublin takes only 15 minutes more.

It is these facts that have many concerned the vice president has not done enough to prevent the appearance of corruption, or as Rep. Ted Lieu (D-CA) put it on Twitter, “Funneling taxpayer money to @POTUS by staying at this Trump resort is sooooooo corrupt.”

Hey @VP @mike_pence: You took an oath to the Constitution, not to @realDonaldTrump. Funneling taxpayer money to @POTUS by staying at this Trump resort is sooooooo corrupt.

Also, I hope you don’t encounter bedbugs. Many people say there are lots of bedbugs at Trump properties. https://t.co/KgJfnMRSgt

The Trump administration has been plagued by accusations of corruption

In the past, US presidents worked to disassociate themselves from any business interests they held that might have led to conflicts of interest or accusations of impropriety. Trump has chosen not to do so.

He has left his sons in charge of running his empire and has said he doesn’t consult with them on the day-to-day operations of his businesses, but the president nevertheless continues to profit from them.

This has exposed the White House to concerns of corporate influence on policy — like when it was revealed T-Mobile spent $195,000 at Trump’s DC hotel while lobbying for a lucrative merger — and to worries about foreign influence on the administration.

In fact, concerns over foreign actors spending at Trump properties has spawned two lawsuits that argue the Trump administration has violated the Constitution’s emoluments clause, which prohibits payments and gifts from foreign governments. Those lawsuits are being paid for by taxpayers, as the Department of Justice is defending Trump, arguing that he has not violated that clause.

While Pence is, of course, a US citizen, his stay at the Trump International — and the fact Trump suggested he patronize the property — would make it appear that Trump is not hesitating to benefit financially from his office.

Beyond the money the government and Pence himself will pay for the stay, come additional benefits, from free advertising for the property through articles like this one, as well as from the cachet the hotel will gain from being able to state on promotional materials that it has played host to both a sitting president and vice president.

And Trump, despite the criticism he and Pence have faced over their Ireland visits, is only doubling down. The US will host next year’s G7 summit, and the president has said he would like the leaders of the world’s seven largest economies to cloister not at Camp David or the White House, but at his property in Florida, the Trump National Doral Miami golf resort.