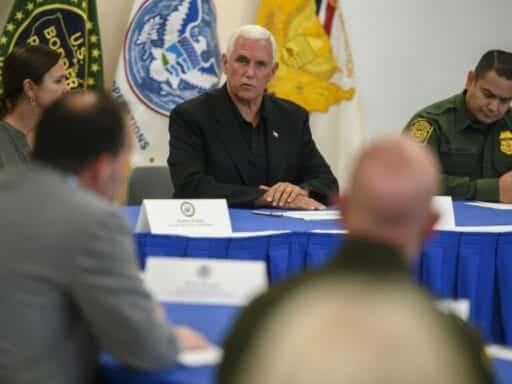 The vice president said he expected the overcrowded conditions, and blamed Congress for them.

Vice President Mike Pence visited an overcrowded, unsanitary migrant detention center on Friday as part of a tour meant to highlight the Trump administration’s handling of an influx of immigrants and asylum seekers crossing the US-Mexico border.

At a McAllen, Texas facility housing nearly 400 Central American men, reporters noted an overwhelming foul odor and extreme heat. Men packed in cages worked to get the reporters’ attention, telling members of the press they did not have access to showers or toothbrushes; some of the detained said they’d been at the center for more than 40 days, and others claimed to be underfed and hungry.

VP saw 384 men sleeping inside fences, on concrete w/no pillows or mats. They said they hadn’t showered in weeks, wanted toothbrushes, food. Stench was overwhelming. CBP said they were fed regularly, could brush daily & recently got access to shower (many hadn’t for 10-20 days.) pic.twitter.com/tHFZYxJF7C

Although the men had Mylar blankets, the cages lacked cots or bedding; immigration officials said there was not room for all of the detainees and beds. The detained people instead had to sleep on the concrete floor.

A few other images from inside: pic.twitter.com/0s7nLXyT3p

Pence called the conditions “tough stuff,” but said, “I was not surprised by what I saw. I knew we’d see a system that was overwhelmed.”

Michael Banks, the CBP officer in charge of the facility, disputed the narratives shared by the detained migrants. He told reporters all detained people were allowed to shower, but admitted a trailer shower had just been brought onto the premises Thursday, and said some of the men at the facility had not yet had a chance to use it. Because of the lack of shower facilities, Banks estimated some of the men had been forced to go 10 to 20 days without showers. He also said the facility is air-conditioned and is cleaned three times a day; pool reporter Joshua Hawley of the Washington Post described the holding area as “sweltering hot” and as having a “stench [that] was horrendous.”

Banks further pushed back again the detained people’s claims of being hungry; he told reporters all immigrants and asylum seekers at the facility received three hot, catered meals from local restaurants each day, and that they were also given snacks and juice throughout the day. The vice president and reporters were not at the center at a mealtime, and did not get to witness this, however.

Speaking with CNN after his tour of the facility, Pence blamed Congress for the situation there, arguing that the poor conditions exist because the legislative branch has not given the executive branch enough funding to provide migrants with more hygienic conditions.

“The time for Congress to act to end the flow of families that are coming north from Central America to our border is now,” Pence said.

“Congress has got to act … to reduce the numbers of people coming into our country illegally,” says VP Mike Pence on overcrowding in detention centers at the border. “The [CBP] is doing their level best in an over-crowded environment … to address this issue.” pic.twitter.com/ooUPxrFaPG

The White House has long blamed Congress for poor conditions at detention centers. In a June interview with CNN, Pence told the networks’ Jake Tapper that Congress was at fault for insufficient bed space, and that same month, President Donald Trump told NBC, “If the Democrats would change the asylum laws and the loopholes, which they refuse to do because they think it’s good politics, everything would be solved immediately. But they refuse to do it.”

Congress has passed a bill allotting $4.5 billion in supplemental humanitarian border aid, and Pence said Friday the crowded conditions reporters witnessed are why that money was needed. He also argued that larger reforms are necessary, and said the White House is ready to do what it takes to make reform a reality: “The president and I are ready to roll our sleeves up and work with men and women in both political parties in the Congress to bring about the changes that will bring an end to this crisis.”

That facility was not at full capacity; it held around 800 people and was reportedly markedly cleaner than the McAllen facility. Pence and his wife, Karen Pence, spoke through translators to children held in a room where they watched Spanish-language cartoons.

Several children nodded “yes” when the vice president asked them if they had enough food and if they were being taken care of; others, however, shook their heads “no” when Pence asked if they had a “place to get cleaned up,” according to reports.

The children wore winter jackets and hats indoors because of the air conditioning in the center.

At a roundtable discussion following his tour, Pence congratulated CBP officials on their conduct towards migrants: “It’s my honor to be with you all and to have the opportunity to see firsthand the extraordinary and compassionate professionalism of Customs and Border Protection.”

He later praised this facility on Twitter, and called CNN “so dishonest” for reporting on the squalid conditions at the second center.

Thank you to the brave men and women of @CBP working tirelessly each day to secure our border. The work you do not only keeps our country safe but keeps the American people safe and we are so grateful for your service! pic.twitter.com/aK4St41YFd

Following a visit to detention centers in Texas, Congressional Democrats — including Reps. Rashida Tlaib and Alexandria Ocasio-Cortez — testified at a House Oversight Committee hearing about what they had witnessed at the facilities, and attacked the Trump administration as they did so.

Ocasio-Cortez said the conditions at the border were not the fault of Customs and Border Protection, but of the Trump administration’s cruel policies.

And Tlaib called the current border strategy one that was “intentionally and cruelly created by the Trump administration dead-set on sending a hate-filled message that those seeking refuge are not welcome in America.”

“We have a crisis at our border,” Rep. Rashida Tlaib says in emotional testimony, saying the Trump administration is “dead set on sending a hate-filled message that those seeking refuge are not welcome in America, in our America.” https://t.co/J1A2XVJJDd pic.twitter.com/qfE9h245vr

Ocasio-Cortez similarly attacked the Trump administration’s immigration policies as overly harsh, saying “There is no need for us to overcrowd and to detain and under resource,” and arguing “the cruelty is manufactured.”

Speaking to reporters following his tour, Pence pushed back against this claim, saying Trump had sent him to Texas in full view of cameras in order to show that the border crisis is not “manufactured” and to push Congress needs to act.

“The crisis is real,” he said. “This is not a manufactured crisis.”

Recently, the administration has faced criticism not just from political rivals, but from external parties who are less concerned about whether the problems at the border are manufactured or not, and more worried about the US upholding international law.

Michele Bachelet, UN high commissioner for human rights, condemned US treatment of migrants in early July and said detention should be a last resort, as Vox’s Catherine Kim reported:

“In most of these cases, the migrants and refugees have embarked on perilous journeys with their children in search of protection and dignity and away from violence and hunger,” Bachelet said in a statement. “When they finally believe they have arrived in safety, they may find themselves separated from their loved ones and locked in undignified conditions. This should never happen anywhere.”

Bachelet especially criticized the US for detaining children, which “may constitute cruel, inhuman or degrading treatment that is prohibited by international law.” Detaining children could have serious impacts on their development, which is why it should never be practiced, she said.

“As a pediatrician, but also as a mother and a former head of state, I am deeply shocked that children are forced to sleep on the floor in overcrowded facilities, without access to adequate healthcare or food, and with poor sanitation conditions,” she wrote.

Bachelet’s findings cited the Department of Homeland Security’s own Inspector General report detailing the poor conditions at the detention centers. That report found “dangerous” conditions at detention facilities that it said “represent an immediate risk to the health and safety of DHS agents and officers, and to those detained.”

Progressive lawmakers like Ocasio-Cortez worked to include accountability measures as part of the $4.5 billion humanitarian border funds package Congress passed in early July; these measures would have outlined guidelines for care and health standards at detention centers. However, the push to add the measures was defeated, and the funding bill was passed without them.

A guide to the 2021 Oscars, which are still happening
The debate over what “believe women” means, explained
Senate Republicans were never going to vote for witnesses
3 California counties are defying state orders on reopening businesses
The Warren/Buttigieg wine cave controversy, explained
Vox Sentences: The rest of El Chapo’s life