Mike Pence will attend Biden’s inauguration. Trump will not. 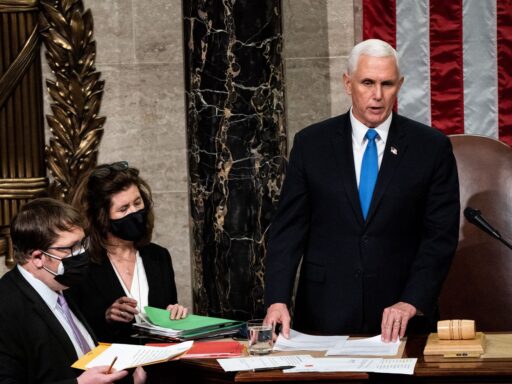 Biden has said he would “be honored” to have Pence attend.

Vice President Mike Pence will attend President-elect Joe Biden’s inauguration, the New York Times reported Saturday. Pence’s decision runs counter to that of President Donald Trump, who announced Friday that he would not be attending the ceremony on January 20.

Biden praised Trump’s decision on Friday, telling reporters, “It’s a good thing, him not showing up,” citing, among other reasons, Trump’s role in whipping his supporters into a violent takeover of the US Capitol on Wednesday. “He exceeded even my worst notions about him,” Biden said. “He’s been an embarrassment to the country.”

Pence, meanwhile, Biden said, “is welcome to come,” adding that he would “be honored to have him there and to move forward in the transition.”

Pence was at the Capitol during the recent insurrection, and was forced to hunker down inside the building after a mob of Trump supporters stormed the building attempting to hinder Congress’s certification of Biden’s electoral college win. Prior to sending his supporters to the Capitol, Trump worked to publicly pressure Pence into using his ceremonial role as the leader of the certification process to overturn the results of the 2020 election. Pence refused to do so, however.

According to CBS News’ Margaret Brennan, Trump has said Pence was at the wrong end of a “bad deal” when speaking about the vice president being trapped in the Capitol amid the violence, but has refused to take any responsibility for putting Pence in that position. Brennan and CNN both report that the president and vice president haven’t spoken since the Capitol insurrection.

In order to remove a president using the 25th amendment, a majority of the Cabinet and the vice president would need to attest that the president is unable to “discharge the powers and duties” of his office. Several prominent members of the president’s cabinet, however, like Education Secretary Betsy DeVos, resigned from their posts this week, no longer wishing to be associated with Trump’s violent rhetoric.

Pence reportedly ended discussion of using the 25th Amendment, but Saturday, CNN reported that the vice president hasn’t yet ruled out using the amendment to remove Trump from office, reporting that Pence is open to invoking it if the president “becomes more unstable.”

All this has reportedly left president furious with Pence, while the vice president is said to be saddened and disappointed to see Trump turn against one of his most loyal allies.

There is concern about further violence — including at Biden’s inauguration

That disappointment and anger extends beyond the White House.

House Democrats are expected to introduce articles of impeachment against Trump as soon as Monday for his role in encouraging this week’s bloody insurrection — and some Democrats have suggested the articles could address Trump’s attempts to influencing state-level election officials into overturning the election as well.

Trump however, reportedly has no plans to resign. And so, Democrats seem poised to move forward with impeachment — so far, over 220 Democrats in the House support impeaching the president for a second time.

A few Republican lawmakers, including most recently, Pennsylvania Sen. Pat Toomey, have also called on Trump to resign. Saturday, Toomey said Trump had “committed impeachable offenses,” but stopped short of calling for impeachment.

But other Republican lawmakers — including some of those who objected to certifying Biden as the winner of the 2020 election — argued strongly against another round of impeachment for the president.

“‘Unity and healing’ doesn’t happen with cancel culture and impeachment,” tweeted staunch Trump ally Rep. Jim Jordan (R-OH). And Sen. Linsey Graham (R-SC) encouraged Biden to reach out to Pelosi and progressive lawmakers to head off a second impeachment vote in the name of healing and unity.

At the moment, impeachment seems to be likely to move ahead, although the timeline is in question. And with inauguration day drawing near, there is concern that Trump supporters — angry over his loss, and perhaps the impeachment that may come — could lead to further violence.

The president’s most ardent devotees are planning a “million militia march” for inauguration day, according to the Washington Post, and there have been calls for armed protests leading up to Biden’s swearing in.

Twitter reportedly took note of the planned violence, noting that some pro-Trump groups appeared to take the president’s refusal to attend the inauguration as an endorsement of violence against the day’s proceedings. And these concerns were a significant part of what led to Trump’s permanent Twitter ban Friday.

Masks can fool facial recognition systems, but the algorithms are learning fast
Vox Sentences: This newsletter is not a draft, a mistake, or unsigned
Greta Thunberg is traveling from Canada to Chile without leaving the ground
Missing your high school graduation? Strangers on Facebook might want to give you gifts.
Is abuse of power an impeachable offense?
There’s a new, mysterious pneumonia outbreak in China