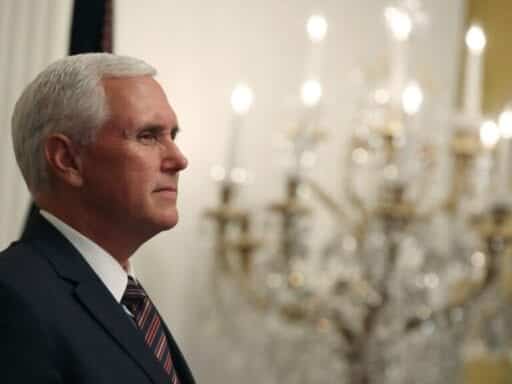 In 2016, Mike Pence thought it was “basic” that foreign governments can’t be involved in the American political process. But three years later, his views have evolved.

Pence, however, said “I think the American people have a right to know if the vice president of the United States or his family profited from his position as vice president during the last administration. … The president made it very clear that he believes other nations around the world should look into it as well.”

Video of Pence’s comments was shared on Twitter by an arm of the Trump campaign:

“The fact that my predecessor had a son who was paid $50,000 a month to be on a Ukrainian board, at the time that vice president Biden was leading the Obama Administration’s efforts in Ukraine, I think is worth looking into.” – VP @mike_pence

“This administration is going to continue to advance the policies and the agenda we were elected to advance,” he added.

But “the policies and the agenda” Pence supported on the campaign trail in 2016 were, in fact, quite different from what he said on Thursday. During one of the vice-presidential debates, Pence said, “This is basic stuff. Foreign donors — and certainly foreign governments — cannot participate in the American political process.”

In fairness, Pence isn’t the only Republican whose views about foreign interference have conveniently evolved to fit the needs of whatever Trump requires to fend off the latest scandal. As the Bulwark publisher Sarah Longwell noted, Sen. Lindsey Graham (R-SC) has undergone a similar transformation.

2017 Lindsey Graham felt very differently about whether or not it was OK for a politician to engage a foreign government in American politics than 2019 Lindsey Graham. pic.twitter.com/xmAMjE09qH

Pence and Graham’s efforts to downplay Trump’s very public solicitation of foreign interference even though they’re on record denouncing that exact type of behavior is not only stunningly hypocritical, but it also raises questions about if there’s anything Trump might do that they wouldn’t defend.

Al Gross is hoping to ride Alaska’s independent streak to the Senate
Cuomo says he needs 30,000 ventilators to avoid massive coronavirus deaths. Trump doesn’t buy it.
Mike Pompeo is the Trump administration’s ultimate survivor
How Covid-19 immunity testing can help people get back to work
Senators allegedly dumping stock as the market tanks is why some people think senators shouldn’t own...
Photos: what Hurricane Michael’s destruction looks like on the ground