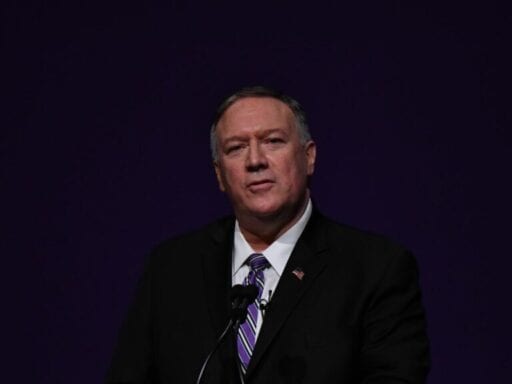 With John Bolton gone, the secretary of state can be “ascendant.”

The firing of John Bolton — President Donald Trump’s third national security adviser in just two and a half years — on Tuesday once again highlighted the unprecedented amount of turmoil and turnover we’ve seen in the Trump White House, particularly in the national security team.

But there’s one person who has seemingly cracked the code of how to survive under Trump: Mike Pompeo.

Appointed CIA director in the earliest days of the Trump administration and later tapped to be secretary of state, the former Congress member from Kansas has outlasted everyone from the inaugural class of Trump foreign policy advisers — Rex Tillerson, James Mattis, Michael Flynn, and Nikki Haley — as well as several of their replacements, including H.R. McMaster and now Bolton.

In the process, Pompeo has become one of the most powerful and influential staffers of this administration. And with Bolton gone, Pompeo may be able to amass even more clout in Trump’s orbit. “He has an opportunity to be ascendant,” a State Department official told me.

So what’s his secret? How has he managed to avoid drawing the ire of a notoriously combative and mercurial president and remain in his good graces for so long? That’s the question I put to a half-dozen current and former US officials, as well as several foreign policy experts.

Together, they painted a picture of a savvy political operator who has followed a simple playbook for how to thrive in the Trump White House: Never disagree with the president in public, keep friends and push out adversaries, and don’t be afraid to pursue a nakedly partisan foreign policy.

These three simple rules have enabled Pompeo to take the lead on major issues from North Korea to Iran to Afghanistan to Venezuela. He’s done so in lockstep with Trump at every turn, illustrating that the result of America’s actions in the world are as much a result of his doing as the president’s.

How Pompeo has stayed on Trump’s good side

Here are the three main ingredients to Pompeo’s secret sauce for remaining in good stead with Trump, which have been tried and tested in his nearly three years of tenure.

Nearly every person I spoke to told me that the secretary and the president are simpatico on all things. “Pompeo and Trump have a good personal relationship,” says a State Department official, who like others spoke to me on the condition of anonymity because they weren’t authorized to speak to press. “I don’t really see much daylight between them.”

Even the president agrees. “I argue with everyone,” Trump told New York Magazine in a 2018 interview. “Except Pompeo. I don’t think I’ve had an argument with Pompeo.”

That’s by design. Pompeo makes a point to bring up any policy disagreements directly and privately with the president. Pompeo is known as a staunch Iran hawk who has expressed desires for regime change. Trump, however, doesn’t want war with Tehran. It’s very likely that they’ve tussled on that issue behind closed doors. But once Trump chooses a course of action, it appears the secretary backs off.

“Pompeo will let Trump know what his views are but if he gets any indication that Trump is headed in a different direction he will get on board with him,” Thomas Wright, a US foreign policy expert at the Brookings Institution in Washington, told me. “He won’t make a stand. That’s the key to his success.”

It makes sense for Pompeo to be deferential. Trump despises anyone who disagrees with him openly, and it’s the secretary of state’s job to clearly articulate US foreign policy to a domestic and global audience. Pompeo defends his behavior in this way, saying it’s his duty to both inform but also defend Trump’s actions.

“I work hard for the president of the United States, who was constitutionally elected. He is my leader. My task is to share with him the best information,” Pompeo said during an August interview on CBS’s This Morning.

But some believe Pompeo’s coziness with the president stems mostly from his desire to stay in Trump’s good graces. “He’s like a heat-seeking missile for Trump’s ass,” a former US ambassador told the New Yorker last month.

Here are just two examples: As the CIA boss, Pompeo publicly distorted the findings of intelligence on Russia in order to hide the fact that Moscow preferred Trump to Hillary Clinton. He told a crowd that Russia’s efforts didn’t affect the outcome of the election, when the US intelligence community clearly stated that it didn’t make any judgment on that precise issue.

And as secretary of state, he rebuffed the CIA’s assessment that Saudi Arabia’s Crown Prince Mohammed bin Salman, known as MBS, was behind the murder of Jamal Khashoggi. Trump has consistently refused to acknowledge MBS’s culpability in the killing in order to preserve his administration’s friendly relationship with the crown prince. And Pompeo has consistently followed Trump’s lead on that.

There’s more, but the point is that whenever Pompeo gets a chance to do Trump’s bidding, he does it.

2) Surround yourself with friends and push out adversaries

They say to keep your friends close and your enemies closer, but Pompeo doesn’t fully follow that advice. Nothing illustrates that better than his months-long feud with Bolton.

Initially working in tandem, they began to split over two key issues: Iran and Afghanistan.

Trump reimposed sanctions on Tehran after leaving the nuclear deal as a way to get Iranian officials to renegotiate a stronger agreement. Pompeo knew that was Trump’s approach and continues to work to get the president in a room with his Iranian counterpart. Bolton, however, didn’t think Trump should engage so closely with a US adversary. Instead, he pushed for the US to keep the economic pressure on and crush the regime.

Those divergent views pitted Pompeo and Bolton against one another for months.

But the biggest fight came as both advisers squabbled over how or if to end the Afghanistan war. Trump aims to strike a peace deal with the Taliban as a way to end America’s involvement in the 18-year war there. Bolton bristled at that and refused to defend the president’s policy on television.

What’s more, Trump worked to bring the Taliban and Afghan government officials for a secret negotiation last week. The State Department purposefully kept Bolton out of the loop and even out of crucial meetings leading up to the event.

That was extraordinary: the national security adviser is the person who coordinates big, well, national security issues for the government. Keeping the president’s key aide out of proceedings, then, was a sign of how far he’d fallen and much Pompeo worked to sideline him.

Both men barely spoke to each other in the weeks before Bolton’s departure, and they even stopped meeting privately to coordinate.

It’s unclear if Pompeo told Trump that he’d work better with Bolton gone. But when asked by a reporter on Tuesday what he thought of Bolton leaving the administration — less than two hours after it happened — Pompeo simply replied: “I’m never surprised.”

With his chief rival out of the way, Pompeo now has the space to gain even more authority. It’ll help that he has allies on Trump’s team now, especially Esper — a former classmate of his at West Point — and his former deputy at the CIA, Gina Haspel, now leading the spy agency. He’d be further strengthened if Brian Hook, the leading Iran official at the State Department, makes a rumored move to replace Bolton.

Put together, Pompeo has found a way to outlast and push out adversaries while bringing in more of his likeminded allies. Not bad for a first-time Cabinet official.

3) Lead foreign policies that play to Trump’s political base

During his eight years in Congress, Pompeo was known as a conservative firebrand who unapologetically bashed liberals and stood up for red-meat Republican causes.

He supported keeping open the US prison at Guantanamo Bay, Cuba, defended the CIA’s use of torture during the Bush administration, and sees Iran and “radical Islamic terrorism” as top national security threats — all positions closely aligned with those of Trump. He was also one of the main driving forces behind pinning the blame for the 2011 Benghazi attacks on then-Secretary of State Hillary Clinton.

It’s no surprise, then, that he wouldn’t blink at helping Trump implement an unabashed partisan foreign policy under Trump.

“The key reason Pompeo survives is that he understands the essential truth about Trump’s foreign policy agenda: it’s about promoting Trump’s interests at home,” Frances Brown, who served in the Obama and Trump National Security Councils, told me. “Pompeo seems to recognize that the most important geographic region of focus for the Trump foreign policy agenda is in the US heartland — which coincidentally is right where he could potentially make a Senate run next year.”

Two issues stand out in particular: Iran and Venezuela.

Trump withdrew the US from the Iran nuclear deal last year, partly because he wanted to undo Obama’s work but also because he felt the US could’ve gotten more out of Tehran. But both he and Pompeo knew that the agreement was extremely unpopular with Republicans, who spent much of Obama’s tenure railing against the decision to strike the accord. Tearing the deal apart, then, was done surely with an eye toward keeping the GOP base happy.

As for Venezuela — where Trump aims to dethrone President Nicolás Maduro — Trump is exploiting that situation to label his 2020 Democratic challengers as socialists. During a February speech in the bruising battleground state of Florida, the president used a speech about his Venezuela policy to decry the ills Maduro-style socialism brought to his nation.

“Socialism has so completely ravaged this great country that even the world’s largest reserves of oil are no longer enough to keep the lights on,” Trump said at Florida International University. “The socialists have done in Venezuela all of the same things that socialists, communists, totalitarians have done everywhere that they’ve had a chance to rule. The results have been catastrophic.”

He’s since tried to connect Maduro’s rule with the ideas gestating in the Democratic primary, all while aiming them at one specific target.

“Bernie Sanders has already won the debate in the Democrat primary, because every candidate is embracing his brand of socialism,” Kayleigh McEnany, the Trump campaign’s national press secretary, said in an emailed statement after the Vermont senator announced his candidacy. “But the American people will reject an agenda of sky-high tax rates, government-run health care, and coddling dictators like those in Venezuela.”

As secretary of state, Pompeo has his fingerprints all over these policies that so far have proven catastrophic. Iran is reeling under the weight of renewed economic sanctions, but has lashed out violently against US allies and tanked the little goodwill between Washington and Tehran. And Maduro still clings to power in Caracas despite US-led efforts to depose him — including a failed coup attempt.

None of this seems to bother Pompeo, though, who doesn’t mind overseeing a foreign policy that, at least ideologically, the GOP seems to love. It’s also possible that he firmly believes in many of the policies Trump does and feels all will turn out well in the end. That could mean Pompeo is less a Trump enabler and more of a cheerleader.

What remains unclear is if Trump’s foreign policy will change now that Bolton is gone and Pompeo operates as first-among-equals in the administration. But what’s likely to happen is that no matter what the president decides, his top diplomat will stand firmly behind him.

After all, that’s how he’s survived this long.