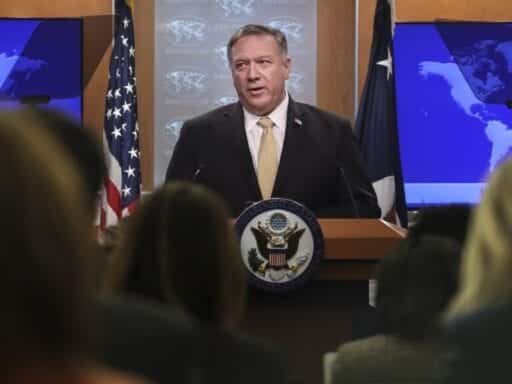 What he said and why it matters.

US Secretary of State Mike Pompeo announced on Monday that he is reversing a longstanding State Department legal opinion labeling Israel’s settlements in the West Bank at odds with international law. This new position sharply contradicts mainstream interpretations of the law, the historic US approach to the conflict, and the broader international community’s view of the situation.

While the announcement has no immediate policy implications, it does send a pretty clear message to Israeli settlers and its government: go ahead and keep moving en masse into land that the Palestinians might want as a home for their future state. It’s part of a distinctively Trump administration approach to the conflict that I’ve termed a “blank check”: essentially letting Israeli Prime Minister Benjamin Netanyahu and his allies on the Israeli right get away with virtually whatever they want when it comes to the Palestinians.

The decision comes at a particularly fraught time in both US and Israeli politics. The Trump administration has been fighting back against impeachment charges fueled by the testimony of State Department officials; Netanyahu’s hold on power is extremely tenuous, as he’s trying to scuttle an opposition party’s ongoing attempt to form a new government without him. It’s hardly a big leap to see this as an attempt by Pompeo to both distract from the Ukraine situation and give the administration’s buddy in Jerusalem an accomplishment he can use to shore up political support.

Whatever the reason behind the move, the result is the same: the US is providing support for the most radical factions of Israel’s right and making the already-monumental task of negotiating a peace agreement even harder.

What Pompeo actually did — and why it matters

On its face, the legal situation seems simple. Article 49 of the Fourth Geneva Convention says that “the Occupying Power shall not deport or transfer parts of its own civilian population into the territory it occupies.”

Israel took control of the heavily Palestinian West Bank from Jordan in the 1967 Six Day War, has not formally annexed it, and yet maintains military control over the territory. If you visit the West Bank, as I did last week, you’ll see Israeli-populated settlements built after the war dotting the landscape, ranging in size from tiny outposts to reasonably sized cities.

That description sure makes it seem like Israel is transferring “parts of its own civilian population into the territory it occupies.” In 1978, the Carter administration’s State Department issued a memo saying that the settlement enterprise is “inconsistent with international law.” The next president, Ronald Reagan, said he disagreed with that decision — called the Hansell Memorandum — but didn’t formally reverse it. So the memo has stayed on the books since then, even though public US statements would often carefully refer to the settlements as “illegitimate” rather than “illegal.”

The notion that the settlements are illegal is supported by a 2004 International Court of Justice advisory ruling and a number of UN Security Council resolutions that the US either allowed to pass or voted for. However, Israel and some of its defenders have argued that the settlements are not illegal, claiming that the West Bank is not occupied territory but rather “disputed territory” and that Israelis voluntarily moving into the West Bank is not a “population transfer” under the terms of the Geneva Convention.

On Monday afternoon, Pompeo essentially took Israel’s side, announcing a formal repudiation of the Hansell Memorandum. He billed this as both the result of a review of the law and an important step towards a peace agreement.

“Calling the establishment of civilian settlements inconsistent with international law has not advanced the cause of peace,” he said. “The hard truth is that there will never be a judicial resolution to the conflict, and arguments about who is right and who is wrong as a matter of international law will not bring peace.”

This argument is exceedingly strange. No one seriously believes in a “judicial resolution” to the Israeli-Palestinian situation, that the simple act of declaring the settlements “illegal” would magically get rid of them and bring peace. Rather, the argument is that the settlements are major barriers to peace — a fact which every US administration has recognized at one point or another — and that the US ought to put diplomatic pressure on Israel to limit their growth.

If you spend significant time in the West Bank, it’s easy to understand the reasoning here. The security bubble Israel maintains around settlements cuts off Palestinian communities from each other and makes a meaningful, economically viable existence for some of them impossible. The very existence of settlements creates an Israeli constituency that opposes any peace deal that involves creating a viable Palestinian state, as this would require the evacuation of hundreds of thousands of settlers from their homes.

Pompeo’s substantive arguments are not serious. It’s better to understand this is part of a broader set of diplomatic policies, ranging from the administration’s pick of a hardline anti-Palestinian ideologue as ambassador to its decision to move the US embassy to Jerusalem, that seem designed to boost Netanyahu’s political fortunes and encourage the expansion of the settlement project with a wink and a nudge. It’s an approach that indulges Israel’s worst instincts, pushing it to cement the worst elements of the occupation and undermine its long-term prospects for survival.

“We are strong enough to deter and defeat enemies,” Nimrod Novik, the Israel Fellow at the pro-two state Israel Policy Forum, said in an emailed statement. “What we don’t have is [a] system to defend us from friends who threaten to end the Zionist vision.”

A comprehensive guide to the new science of treating lower back pain
Facebook has always been about relationships. Now it’s in the dating game.
Meet the moderators of the South Carolina Democratic debate
The fall equinox is Monday: 9 things to know about the first day of autumn
In this joyous fantasy novel, books and art are the key to cheating death
Some cities are shutting down transit after curfew. It’s a problem for essential workers and protest...