Minks are transmitting Covid-19 to humans. Don’t blame the minks. 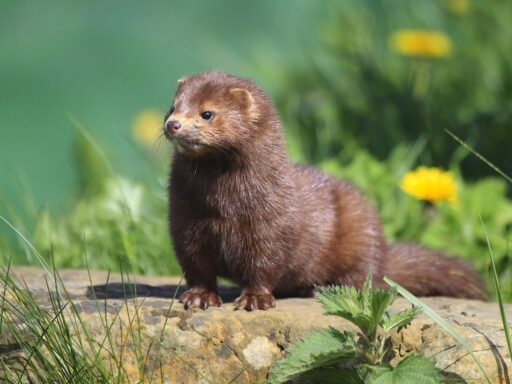 Share
Loading...
When minks are bred for their pelts — which are used to make fur coats and accessories — they are confined in small cages for their entire lives. They cannot engage in natural behaviors like roaming territories, digging, or swimming. | Getty Images

From Denmark to the US, outbreaks on mink farms raise concerns that a virus mutation could make our vaccines ineffective.

Denmark’s fur farms are home to 17 million minks, and last week, the government announced it would kill all of them.

This week, however, the government rolled that back a bit. Now, the government merely recommends killing all farmed minks in the country. It will only require the killing of minks — weasel-like animals prized for their fur — on farms where Covid-19 has been detected.

Danish Prime Minister Mette Frederiksen initially said all 17 million minks would be culled because the virus that causes Covid-19 had moved from humans to minks and back to humans. The country’s public health officials reported that while in the mink, the virus had mutated, raising the risk of a new strain circulating among us that our vaccines would be ineffective against — a finding that, to be clear, is preliminary and has not been confirmed in peer-reviewed research. In a worst-case scenario, that could set back the clock on our pandemic recovery.

This fear isn’t limited to Denmark. There have also been Covid-19 outbreaks on mink fur farms in the Netherlands, Spain, Sweden, Italy — and the US. At least a million minks have already been culled by gassing in the Netherlands and Spain, though the US has so far avoided culling. On farms in Utah, Wisconsin, and Michigan, thousands of minks have died of the disease, but mink-to-human transmission has not yet been detected.

The threat to public health seems to raise an ethical dilemma: Should farms kill all their minks in order to prevent a mutated form of the virus from spreading among all human beings? Is causing that much animal suffering justifiable if it prevents a lot of human suffering, which could result if our future vaccines are ineffective against the new strain?

Denmark, at first, thought the answer was yes. But it was forced to backtrack after experts pointed out that the government couldn’t legally mandate a mass cull without passing new legislation, and after infectious disease experts questioned the scientific basis for the cull.

Angela Rasmussen, a virologist at Columbia University, was among those pushing back. She pointed out that there is no data available to support the claim that the mink variant risks jeopardizing our future vaccines. Denmark’s public health authority suggested that might be the case based on its findings, but those findings were not peer-reviewed, and no specific data on the mutation was released to the scientific community — yet another instance of “science by press release” during the pandemic. What’s more, viruses mutate all the time; that’s normal and expected, so the mink variant is not necessarily cause for panic.

So there’s no reason to be extra concerned about these mink variants without evidence otherwise. We should review the data objectively when available and we should continue and expand genomic surveillance.

If it turns out to be true that the mink variant would jeopardize our vaccines and that there’s a strong chance that thousands or even millions of people will therefore die if we don’t cull the minks, you could make the case that a cull is the lesser of two evils. But we just don’t have enough data right now to know whether that’s true.

We do, however, know one thing with certainty. The fact that we are being forced to choose between two reasonable impulses — wanting to prevent animal suffering and wanting to prevent human suffering — is the result of another decision made: to farm thousands and thousands of animals in close quarters and unsanitary conditions.

Mink fur farms have a reputation for cruelty. The animals spend their entire lives confined in small cages, where they grow so distressed that they sometimes resort to self-mutilation and even cannibalism.

In some ways, fur farms are comparable to factory farms — the huge industrialized facilities that supply more than 90 percent of meat globally and around 99 percent of America’s meat.

In both environments, animals live in cages under harsh conditions that compromise their immune systems. They’re tightly crowded together, often coming into contact with each other’s secretions and excrement. To make matters worse, selection for specific genes makes the animals almost genetically identical. That means that a virus can easily spread from animal to animal without encountering any genetic variants that might stop it in its tracks. As it rips through a herd, the virus can mutate and grow more virulent.

That’s why Michael Greger, an expert on zoonotic viruses, previously told me, “If you actually want to create global pandemics, then build factory farms.”

Both with fur farms (which contain thousands of animals) and with larger factory farms (which contain tens or hundreds of thousands of animals), we have created perfect-storm environments for the emergence and spread of disease. As the Humane Society Veterinary Medical Association recently wrote, “Fur farms often lack naturally mitigating factors — such as abundant sunlight, genetic variability, and healthy distance between animals. For these reasons, fur farms provide potential channels for diseases to propagate.”

The sheer number of animals we keep on these farms makes it likely for disease to spread. It’s also what makes it hard for us to think of a way to stamp out the problem other than by killing all the animals.

Jeff Sebo, a professor of environmental studies, bioethics, and philosophy at New York University, said the moral of the story is obvious: “As a general rule, if you have so many animals in your care that you are unable to care for them during crises, then that is too many, and you should not be allowed to own or keep that many animals in the first place.”

Culling animals en masse is not as rare as we might like to think. This spring, millions of animals were euthanized on American factory farms because there were no meat plants to send them to for slaughter; many plants had been shuttered after workers contracted Covid-19. And right now, hundreds of birds in the UK are being culled because an outbreak of the H5N2 avian influenza has been detected.

The way we’ve designed our animal farming system forces us to make tragic choices. “It basically makes us have to get into some contorted ethical reasoning,” Sebo said.

For example, if you’re trying to decide whether it’s justifiable to kill 17 million minks in order to save thousands or millions of people, you might find yourself in the bizarre situation of having to ask: Is one mink life worth 1/50th of a human life? Or 1/100th? Or 1/1000th? The mere act of running this calculation in your mind may feel morally demeaning because of how it treats living beings as commodities.

In this regard, it’s good that the Dutch mink industry is shutting down entirely by 2021. Hopefully other countries will follow suit. Mink farming is also unnecessary and cruel, so there’s little upside for continuing the practice if it’s also a spillback risk.

The mink situation has forced even some animal advocates to support a cull, for fear that leaving minks alive with untreated Covid-19 will cause them severe respiratory distress. “If mink on a farm are infected​, suffering respiratory problems, and are not being culled, their welfare ​will also be seriously compromised,” said Joanna Swabe, a policy adviser for Humane Society International. Animal Protection Denmark CEO Britta Riis likewise said it was a “necessary decision” to cull, expressing concern about the welfare of the minks before they die.

And of course there are the potential public health risks for humans, which require more research but are not farfetched. The bottom line: “We have placed ourselves in this situation where we’re forced to make a choice that we never should have had to make,” Sebo said.

If we decide to keep raising thousands of animals on high-density farms, it’s clear we will keep finding ourselves in terrible and unnecessary moral binds where we have to choose between animal welfare and human welfare. We need to ask ourselves whether the benefit — a fur coat, a cheap cut of meat — is really worth the cost.

Vox Sentences: You can’t hang a “closed” sign on the border
7 authors tell us how 20 years of Harry Potter shaped their lives
Beef is bad for the planet. Can we make it better?
Amazon employees are using Prime Day to push for better working conditions
How severe could Trump’s Covid-19 case be? Here are his risk factors — and advantages.
How voting by mail could save the US election