Miss America or Democratic debate: Can you tell the difference? 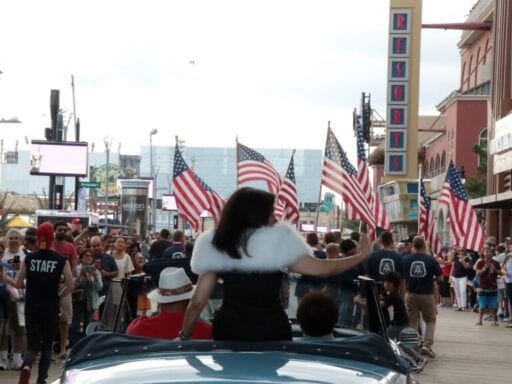 Share
Loading...
Suzette Charles, Miss America 1984, grand marshal of the “Celebrate America” parade, waves to the crowd as she rides down the Atlantic City Boardwalk on September 7, 2019. | Donald Kravitz/Getty Images

The Democratic debate and Miss America pageant were on the same night. And they weren’t as different as you’d think.

The sixth Democratic presidential debate and the 2020 Miss America pageant fell on the same day this year. The two events couldn’t be more different — or could they?

If you’re not a regular pageant viewer, you’ve still probably seen the viral videos that pop up from time to time of a contestant’s cringe-worthy sound bite. Remember Miss South Carolina’s 2007 “uh, the Iraq, everywhere like such as” flub? But then again, there are viral debate missteps, too: In 2011, Republican Rick Perry couldn’t remember one of the three government agencies he wanted to eliminate, shrugging it off, literally, with an “oops.”

Yes, one is a competition for a one-year crown, a scholarship, and a year of traveling around the country, while the other is a pitched battle for American voters’ support to run one of the most powerful countries in the world.

But the truth is, debates and pageants do have some commonalities. Both put candidates (even at Miss America, where they don’t call them contestants anymore) on a stage to be judged. In both cases, they’re asked to answer questions on complex issues in a matter of seconds: Miss America has nixed the swimsuit contest and says it’s no longer about looks (although the contestants are all conventionally attractive women). They even let candidates respond to one another for the final question, debate-style.

Presidential candidates, meanwhile, are supposed to be judged on substance, but there’s obviously a superficial element to it, too. The internet was up in arms when entrepreneur Andrew Yang didn’t wear a tie to this year’s first Democratic debate. Ask any woman in politics whether the way she looks, sounds, and carries herself matters — or a candidate of color how their appearance factors in. There may not be a talent competition on the presidential debate stage, but candidates there are metaphorically doing a little song and dance too.

To be sure, Miss America, which dates back to 1921, can feel out of place culturally in the midst of the Me Too era. And it has tried to adapt, to mixed reactions. After a 2017 email scandal revealed top executives making misogynistic comments about past and former candidates, the organization was overhauled and it put in place an all-female leadership team. With the swimsuit competition out, the contestants are now getting more questions; they’re also supposed to come in with a social impact initiative to discuss.

The merits of Miss America’s mere existence aside, looking at it side-by-side with the presidential debates is an interesting exercise, especially when it comes to the Q&A section. It’s actually a pretty similar format: get asked a question about a weighty topic, and then answer in 30 seconds. It’s not an easy task for anyone, nor is it an ideal way to, you know, get into the details of any subject at length.

We went through pageant and debate answers, from Thursday and the past, and found it’s not always easy to tell what’s coming from a “beauty queen” and what’s coming from a candidate for the highest office in the land. Broadly popular political aphorisms sound pretty similar — whether they’re calibrated for a panel of Miss America judges or for America itself.

Think you can tell the difference between what came from a pageant candidate or a presidential candidate? Try the quiz below and find out:

Why a second round of Covid-19 lockdowns might not be as effective
Silicon Valley’s top investing firm has a stark message on coronavirus: Prepare for the worst
I treat teens who attempted suicide. Here’s what they told me.
MoviePass will now limit all subscribers to 3 movies per month
Silicon Valley is snubbing Saudi Arabia’s glitzy conference a year after the Khashoggi killing
Why networks haven’t yet called Pennsylvania for Biden