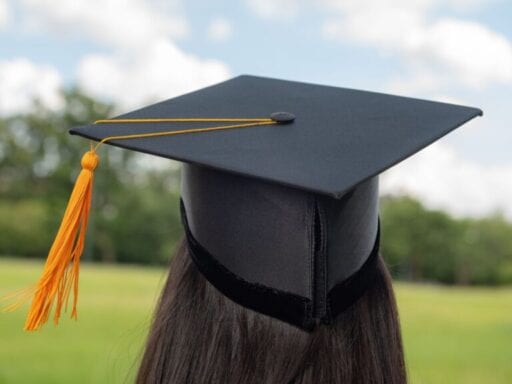 Local and national “adopt a high school senior” Facebook groups have proliferated as the school year comes to an end.

When Mary Storey decided to create a Facebook group to help celebrate the high school seniors in her town of Ruidoso, New Mexico, she never expected it to grow to 50,000 members.

Across the country, groups like Storey’s “Adopt a High School Senior” page have popped up with similar motives — as she says, “to start something positive” while graduation ceremonies are on hold. All of the groups are functioning in the same way: Parents and students post photos and blurbs about graduating seniors, and members of the community can “adopt” them in the comments, sending along baskets, gift cards, and presents in congratulations. For all their good intentions, these groups are also becoming a locus for discussions about charity, materialism, and how and why we give in the time of Covid-19.

“We have a very tight-knit community here in Ruidoso, and many people were posting on Facebook about what their seniors were going to miss out on,” Storey told me. That night, she formed the first “Adopt a High School Senior” group, inviting several people from her friends list to join.

Within a couple of days, the group ballooned to several thousand members. By late April, it had surpassed 50,000 — much to Storey’s surprise. She hadn’t intended for the group to expand beyond her county. Every day, people across the country were requesting to join, from family members to the graduating seniors themselves. And Storey, who had to add on more group moderators, was quickly inundated with posts to approve.

Students and adults alike have used Storey’s page and others like it to exchange care packages and interact with those who have similar interests. For the most part, these insular groups operate as a sort of one-way gift exchange, where parents and students would advertise a child’s accomplishments, usually alongside an Amazon wish list. Occasionally, a local business owner or craft hobbyist would post a call for seniors who wanted something personally sent to them. Storey and her husband have taken on six seniors since she started the group — three local students and three in other states — and sent out care packages with cards, graduation keychains, and T-shirts, as well as ordering pizza delivery for their adoptees.

These adoption groups and, more generally, community support networks have proliferated over the past two months, as millions of Americans were placed under stay-at-home orders. Many families of graduates, faced with the prospect of canceled graduation parties and proms, are eager for an event to celebrate their achievements. Students have also used Instagram to create virtual yearbooks for their classmates, but it appears that these adoption networks have been primarily driven by older community members — not the students themselves.

Rachel R., a senior from Pennsylvania who declined to share her last name for privacy reasons, said she was shocked to find so many well-off, middle-class families sharing their children’s Amazon wish lists on her local adopt-a-senior group.

“I’ve seen someone ask for a MacBook and AirPods, and a lot of the lists on there add up to hundreds, if not thousands, of dollars,” Rachel told me. “Being a senior shouldn’t get us special treatment, although not having a graduation or a prom is really upsetting. But money directed anywhere else — to the poor, the elderly, small businesses, or local charities — would be much more beneficial.”

Perhaps a better use of this money, Rachel suggested, would be to make donations in honor of a senior’s graduation or ask them to pick their own charity to support. “I understand that people in our community feel for the seniors, but on a larger scale, most of us are not the ones who are really struggling,” she said.

Many students have disappointingly missed out on once-in-a-lifetime milestones, but Rachel pointed out that due to the pandemic, families have also postponed weddings and canceled funerals. “I’m sad that I won’t get to walk at graduation, but that’s not the biggest problem right now,” she said. “There are people who are unemployed, people who are sick that can’t pay their medical bills. I think that if people want to help others, that’s beautiful. We shouldn’t solely be promoting the purchasing things for people who can probably buy it themselves.”

Online, users have also brought attention to how people should be supporting at-risk groups, like senior citizens or essential workers, instead of high school seniors.

I’m just saying instead of “adopting a senior” who gets to sleep in and not to go to school they’ve been saying they hate all year; we instead adopt a senior citizen in a nursing home quarantined and denied visitations from family members.

The coronavirus has exacerbated the racial and economic inequalities present in many US cities, and Rachel’s argument highlights the responsibility that consumers, particularly those with disposable income, have when it comes to their purchasing power. In the context of a global pandemic, whom should we be supporting, and where should we direct our time and money?

The high school senior adoption groups — established out of the generosity of many well-meaning community members — demonstrate the resurgence of community giving and aid during such a precarious time. Adopters aren’t required to buy a student anything; instead, both homemade and purchased gifts can be offered as a token of support.

“We recognize that this is a financially trying time for everyone, and not everyone can afford to give,” said Heather Stewart-Rigsbee, the moderator of an adoption group in the Dayton, Ohio, area. “We just want the seniors to be grateful that others are coming into their lives to support them during this time, in whatever way that they can.”

While these groups aren’t exactly akin to the mutual aid networks that have sprung up in many cities, they do allow participants to tangibly show kindness and support to others in their community — even if high school seniors aren’t likely to be the most vulnerable people in this crisis. Now more than ever, people are drawn to events and volunteer activities that help them feel closer to their communities. That collective energy could be harnessed to improve many people’s lives.

Some towns have put together “Adopt a Teacher” events to show appreciation for educators, and there are Facebook groups honoring healthcare workers, essential workers, and college seniors. Stewart-Rigsbee told me that there are only about 160 graduating seniors in her town, but hundreds more community members have expressed interest in adopting. As a result, many seniors — not just those in Stewart-Rigsbee’s group — have been adopted multiple times.

“We’re a community of 2,000 and most of these kids are known by almost everyone in the community because it’s so small,” Stewart-Rigsbee said. “Local businesses have sent out tons of gift cards, and parents are getting really crafty with their gifts and have made wonderful baskets full of snacks.” She emphasized that, at least within her group, students and parents want to build meaningful connections from the “adoption” with other residents beyond having a materialistic exchange.

Makenna Young, a senior in Stewart-Rigsbee’s adoption network, was quickly adopted by several people she personally knew from her town. While some of her peers have created their own wishlists on Amazon, Young told me she’ll be grateful for anything she gets, likening her adoption to that of a graduation party gift. “I just like to be surprised, and this gives the seniors something small to look forward to at the end of the school year,” she told me. “I am just really thankful for the people who’ve put this together.”

Young added that she didn’t want to give her adopters the impression they had to get her specific gifts or items that might be expensive with a wishlist. “I do think people could take advantage of this opportunity and say, ‘I want these big things I don’t want to buy for myself,’” she said. “I’m aware this is supposed to be community outreach, kind of like a ‘I’m thinking of you’ gift — not a Christmas present.”