Mission: Impossible — Fallout is the most entertaining blockbuster of the summer 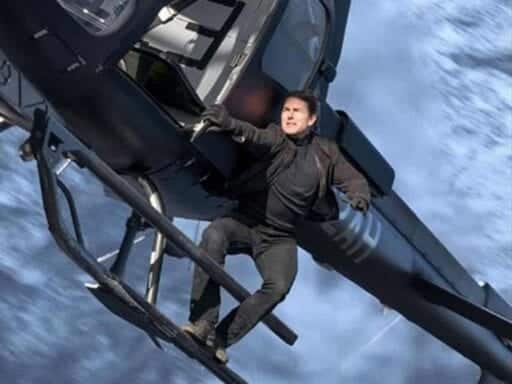 This movie has it all: Tom Cruise doing insane stunts, a kernel of a conscience, and Henry Cavill’s moustache.

In an era of sloppy and forgettable action flicks on the one hand and overly serious “gritty” franchises on the other, the Mission: Impossible movies strike a pleasing balance between memorable action sequences and smaller-scale character intrigue. They’re whatever the opposite of “self-important” is.

And of course, like all of the other movies in the series, a new Mission: Impossible entry brings another opportunity to see what kind of insane stunts Tom Cruise, age 56, will put himself through for our viewing pleasure.

The sixth installment, Mission: Impossible — Fallout, brings all that to the table once again, and it just may be the best blockbuster of the summer. Suitably goofy, with the requisite masks and high-stakes stunts that mark the series, Fallout also pins its story on a lightly considered version of the always-relevant trolley problem: Is it better to save one person from destruction at the cost of many other lives, or to choose to destroy one person to save the lives of the many?

Let me be clear: Even though it does put a spin on one of pop culture’s favorite philosophical questions — The Good Place had an entire episode titled “The Trolley Problem” — Fallout is not a “brainy” blockbuster. It does not really have anything to say about, for instance, human nature, or geopolitics, or much of anything else.

That’s a shame in some respects. For instance, the movie raises but then almost immediately drops an intriguing thread about a terrorist targeting all of the world’s major religions.

But in truth, in all but the steadiest hands, too much heady stuff tends to gum up the works in films that are mainly meant to showcase cool stunts and improbable plot twists, which this film has in spades.

The plot, which is pleasantly murky, moves along at a good clip. Super-agent Ethan Hunt (Cruise) and his IMF buddies Luther (Ving Rhames) and Benji (Simon Pegg) are on the trail of a terrorist going by the name of John Lark, who is purportedly working with a group of 12 people called “The Apostles” to blow up the world. Lark is pursuing some nuclear material to finish the bombs, and Ethan is sent to stop him.

In this, he’s being overseen by Alan Hunley (Alec Baldwin), who made a lateral move into the IMF, and working in concert with a CIA agent named August Walker (Henry Cavill), in a mission directed by Erica Sloan (Angela Bassett). Fallout also brings back some familiar faces: terrorist/former IMF agent Solomon Lane (Sean Harris), who’s been languishing in custody since Ethan put him away in Rogue Nation, and British agent Ilsa Faust (Rebecca Ferguson), who’s got a complicated mission of her own.

The plot twists loopily for a great deal of the film’s nearly two-and-a-half-hour runtime until it settles into its final trajectory, but that’s part of the fun. Christopher McQuarrie, who directed and co-wrote Rogue Nation, returns as solo writer and director on Fallout; he’s nailed the series’ impish, ambitious voice and also injected it with a bit of heart. There are several fun action set pieces that don’t disappoint, and the final sequence, which takes place over the Kashmir mountains, is a bit of a heart-stopper. (It’s probably worth the cost of an IMAX ticket for that scene alone.)

Mission: Impossible — Fallout contains a nugget of ethical exploration that serves it well

Aside from the pyrotechnics and high-speed, high-elevation chases, Fallout does contain an interesting kernel of moral inquiry, and it’s worth noting. It comes back to the trolley problem.

Early on it becomes clear that for those within Ethan’s world of high-stakes, world-saving spy games, there are two fundamentally different ways to approach their jobs. For some, it’s better for an operative, an asset, or even just a bystander to lose his or her life if it means that a large number of people’s lives may be saved. It is, put simply, a numbers game.

For others, though — including Ethan — the idea of sacrificing the life of someone you love, like a dear friend and colleague, is unthinkable, even if it may mean handing over the means of destruction to a foe.

Your outlook may also dictate how you do your job. Agent Walker, for instance, wouldn’t blink an eye at the idea of having to kill a dozen police officers to make off with a potentially dangerous terrorist in their custody. His reputation precedes him, and he’s known for his gun-happy tactics. Ethan, on the other hand, is a little more improvisational, and is forever trying to find ways around killing anyone, even if it means executing a somewhat preposterous and possibly slapdash plan to do so.

Ethan’s way happens to make for thrilling cinema, but it also unearths a hole that shows up in a lot of action movies. Fallout features a badass, brilliant action hero who also never kills anyone without looking them straight in the eye first and visibly weighing the moral choice before him.

These decisions happen several times in the film — sometimes with clear enemies, sometimes in situations that are much blurrier — and aren’t always resolved; sometimes another person ends up stepping in and doing the killing on Ethan’s behalf. Still, it’s an interesting contrast with, say, Skyscraper, in which the obviously morally upright family man at its center seems not to even pause for thought about taking lives.

That just makes for a more interesting character. Ethan Hunt is, all told, dull from a character standpoint; he pines for his lost love, and he doesn’t really follow rules very well. But highlighting this added dimension to his character helps round him out a little.

The moral dilemmas round out Fallout’s worldview as well. In several conversations and statements, a point of view emerges: Actually, there may not be a “right” answer to the trolley problem. Keeping the world safe may actually require people with both perspectives to cooperate together. Someone who has to keep the big picture in mind may need to be able to disconnect from individuals a bit to keep an eye on the big-scale repercussions. But it’s just as important for operatives on the ground to act according to heart, gut, and conscience, instead of abstract, machine-like reasoning.

Inevitably, dramatic tension arises from that conflict — and that makes for a better movie. In addition to the crazy stunts and convoluted plot machinations, what makes the Mission: Impossible movies work in general, and Fallout in particular, is that they let their characters be characters, driven by a number of complex factors, even when they’re chasing an enemy or trying to get out of a scrape. I don’t know how much longer this franchise will last — surely Cruise has to slow down eventually — but as long as there are Mission: Impossible movies like this, we’ll be guaranteed a good time at the movies.

9 states where Democrats can win back legislative control from Republicans in 2018
Putin’s reference to George Soros was a dog whistle to far-right anti-Semites
WeWork might be worth just half of its former $47 billion valuation
The past 48 hours in Trump’s attempt to steal the election, explained
“Are they alive?”: Uighur Muslims demand videos of relatives in Chinese internment camps
The drama over when Pelosi will send Trump’s impeachment articles to the Senate, explained