Missouri could become the first state with zero abortion clinics. How did we get here? 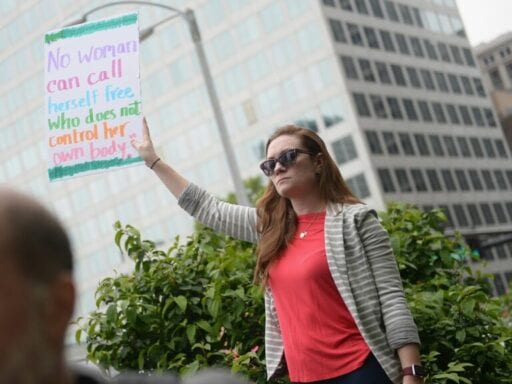 Missouri is facing a post-Roe reality. The reason why is a history of abortion law in America.

A hearing Thursday could decide the fate of Missouri’s last abortion clinic.

The clinic, in St. Louis, is in a dispute with the Missouri Department of Health and Senior Services, which has refused to renew its license unless its doctors agree to interviews about what it says are “deficient practices.” Planned Parenthood, meanwhile, says state officials haven’t explained what the deficiencies are — and they fear that interviews could lead to criminal prosecution in Missouri, which recently passed a near-total ban on abortion.

Planned Parenthood has sued the state for the right to keep performing abortions at the clinic, and the case will be heard on Thursday at the Circuit Court of St. Louis.

If the clinic closes, Missouri would become the only state in the US without an abortion clinic. It would be the first time any state has lacked a functioning abortion clinic since Roe v. Wade was decided in 1973.

The story of how Missouri got to this point is a kind of capsule history of the anti-abortion movement over the past 10 years. In the early 2000s, abortion opponents backed incremental restrictions on abortion clinics at the state level. These laws are largely responsible for the closure of four abortion clinics in Missouri since 2008.

Today, Missouri has the highest ratio of women of reproductive age to abortion provider of any state in the country, with more than a million women in that age group for just one facility, according to Ushma Upadhyay, a professor of obstetrics and gynecology at the University of California San Francisco who has studied abortion access. “The state makes it extremely hostile for an abortion facility to remain open,” Upadhyay, who works in the Advancing New Standards in Reproductive Health (ANSIRH) research group at UCSF, told Vox.

Meanwhile, since the election of President Trump, anti-abortion advocates have pursued a more aggressive strategy, backing the near-total bans on abortion around the country that have passed in recent months. Missouri’s ban, which prohibits abortion at eight weeks’ gestation, was signed into law last week.

Many proponents of near-total abortion bans hope they will lead the Supreme Court to overturn Roe v. Wade, the decision that established the right to an abortion. But depending on what happens on Thursday, the incremental strategy might prevail in Missouri before the aggressive one — and Missouri could enter a post-Roe reality before the Court even takes up the case.

The current dispute began in March, when state officials started an audit of the clinic, Sabrina Tavernise reports at the New York Times. In the process, officials said they had found “deficient practices” and that all physicians at the clinic would have to submit to an interview. The state said consequences of the interview could include “criminal proceedings,” a clinic spokesperson told CBS.

Planned Parenthood said it was not clear what “deficient practices” the state objected to. The Missouri Department of Health and Senior Services has not yet responded to Vox’s request for comment.

On Tuesday, the clinic had reached “an impasse” with the state, according to Planned Parenthood’s head of litigation. Its license to provide abortions is set to expire at the end of this week. So Planned Parenthood filed suit, and the hearing Thursday could determine whether the clinic will be able to continue offering abortions.

At a press conference on Wednesday, Missouri Gov. Mike Parson, who signed the state’s eight-week ban, warned that it would be “reckless” for a judge to allow the clinic to keep offering abortions. “No judge should give special treatment to Planned Parenthood in this instance,” he said.

He also said the state had identified “deficiencies” at the clinic but did not say what they were.

Parson “has made it clear that his goal is to ban abortion care in the state of Missouri, and today’s comments confirmed that this is exactly what this is all about,” said Dr. Leana Wen, the president and CEO of Planned Parenthood Federation of America, in a statement after the press conference. “Our health center meets the highest standard of care.”

Abortion-rights supporters have been showing support for the clinic this week, attending a rally in downtown St. Louis on Thursday as well as holding a sit-in at a building in the city where Gov. Parson has an office. Several activists, including M’Evie Mead, director of policy and organizing at Planned Parenthood Advocates in Missouri, were arrested at the sit-in, according to the Riverfront Times.

Regardless of what happens this week, the clinic will stay open and provide non-abortion services like STI screenings and contraceptive care, a Planned Parenthood representative told CNN.

The situation in Missouri is in large part a result of restrictions known as targeted regulation of abortion providers, or TRAP, laws. These laws, backed by anti-abortion groups in the 2000s, and especially after Republicans gained majorities in many state legislatures in 2010, include requirements that abortion doctors have admitting privileges at a local hospital or that abortion clinics have hallways of a certain width.

Abortion opponents have said that these laws are necessary to protect patients’ health, but many doctors and researchers say they are medically unfounded. Upadhyay, the obstetrics and gynecology professor, says her team has studied admitting privileges restrictions and found no effect on patient care.

But the laws do have an effect on clinics, often forcing them to close as the requirements prove too difficult to meet. It can be hard for abortion doctors to get admitting privileges, for instance, as hospitals often refuse to grant them.

TRAP laws passed around the country in the 2000s, but they have had an especially big impact in Missouri. In 2008, the state had five abortion clinics. In 2017, it had two. In October 2018, one of those clinics closed after it couldn’t meet a new requirement that abortion doctors have admitting privileges at a hospital within 15 minutes of the clinic, according to the Washington Post.

The Supreme Court in the 2016 decision Whole Woman’s Health v. Hellerstedt found TRAP laws in Texas unconstitutional. But the Eighth Circuit Court of Appeals, which includes Missouri in its jurisdiction, has failed to block such laws.

The ongoing march of restrictions has left the Planned Parenthood clinic in St. Louis to serve the more than 1 million patients of reproductive age in Missouri. Maine, the state with the lowest ratio of women of reproductive age to clinics, has one clinic for about every 13,000 women in the age group, Upadhyay said.

Her team has identified two cities in Missouri, Springfield and Columbia, as “abortion deserts,” where patients have to travel 100 miles or more to get an abortion.

The situation in Missouri is a reminder that while near-total bans in Southern states like Georgia and Alabama have gotten attention in recent months, clinic restrictions in the Midwest have already made abortion out of reach for many patients there.

There are “huge swaths of the middle of the country where there is no access,” Upadhyay said.

And while many of the near-total bans are meant as challenges to Roe v. Wade, Missouri could lose its last abortion provider without the Supreme Court saying a word.

Study: Covid-19 lockdowns hit black-owned small businesses the hardest
1,000 people sent me their addiction treatment stories. Here’s what I learned.
A clever new solar solution to one of the trickiest climate problems
Here’s how to stop seeing ads on the internet without screwing over publishers
Americans are using the #TwitterFoodBank hashtag to help each other buy groceries amid the recession
Is It Safe to Eat at Restaurants Yet?