Missouri could lose its last abortion clinic. Its fate will be decided this week. 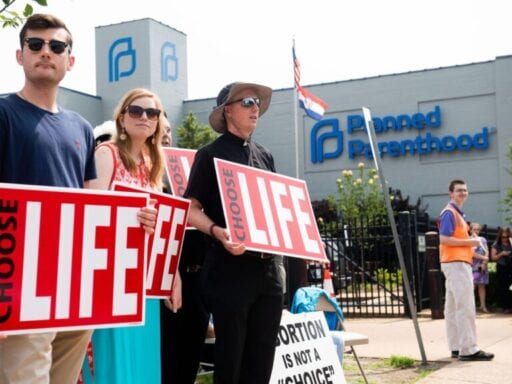 The state could become the first without an abortion clinic since Roe v. Wade.

The last abortion clinic in Missouri is battling for its existence.

Reproductive Health Services of Planned Parenthood of the St. Louis region has been operating for 46 years, serving thousands of patients annually for STI testing, cancer screenings, and abortions. But it might have to stop offering abortion care thanks to a months-long dispute with state regulators.

The controversy started after an audit earlier this year, when officials say they found “deficient practices” at the clinic. While they haven’t been very specific about what those practices are, officials requested interviews with doctors working at the clinic. Some of the doctors agreed, but others did not, possibly fearing that the state would launch criminal proceedings against them. Meanwhile, officials said that if they couldn’t interview all the doctors, they would revoke the clinic’s license to perform abortions.

Beginning Monday, representatives from the clinic and the state will testify at a weeklong series of hearings to determine if the facility can keep its license. If the clinic loses, Missouri residents — including more than a million people who can become pregnant — will have to travel across state lines if they want to end a pregnancy. Advocates say this will increase the already significant obstacles that patients — who are disproportionately low-income — face when trying to get the procedure.

The outcome of the hearing could also signal the end of an era in abortion access: if Missouri loses its clinic, it will become the first state with no provider since Roe v. Wade, the landmark 1973 Supreme Court decision that established the right to an abortion in America.

While near-total bans on abortion grabbed headlines earlier this year, states have also been engaged in quieter, more incremental efforts to restrict abortion. Some, including Missouri, have passed restrictions on abortion doctors, laws similar to one in Louisiana that will go before the Supreme Court this term. But Planned Parenthood says it is also using the clinic licensing process as a roundabout way of shutting the clinic down. If the facility has to stop providing abortions, advocates say, it could be the biggest success yet for the strategy of eliminating access without banning the procedure outright.

“It is the moment that we have long been warning about,” Bonyen Lee-Gilmore, director of state media campaigns at Planned Parenthood Federation of America, told Vox: “the day that abortion access is eliminated without ever overturning Roe.”

State regulators say they have concerns about the clinic. It’s not clear what the concerns are.

The clinic that is now Reproductive Health Services of Planned Parenthood of the St. Louis Region was founded in 1973, the year Roe was decided. Planned Parenthood bought the facility in 1996. Over the years, the clinic has been inspected a number of times, and inspectors were always collegial and professional, Dr. David Eisenberg, the clinic’s former medical director who still provides abortions and other care there, told Vox. But things started to change after the appointment of a new director, Dr. Randall Williams, to lead the Missouri Department of Health and Senior Services in 2017.

Williams, an OB-GYN, was appointed by former Missouri Gov. Eric Greitens, a Republican, and has spoken little publicly about his position on abortion. In an interview with the St. Louis Post-Dispatch earlier this year, he said only, “Abortion is legal in Missouri, and I want it to be safe.”

But soon after his appointment, Eisenberg said, state regulators essentially started saying, “We have reinterpreted the rules and regulations and found what you do to no longer be compliant.” (The health department has not yet responded to Vox’s request for comment.)

The department conducted an audit of the clinic in March, and said it had found “deficient practices,” according to Planned Parenthood, but it didn’t clarify what practices it found deficient. In a statement in June, the department said it was “reviewing incidents with significant medical evidence which point to troubling instances and deviations from the standard care, resulting in serious patient harm.”

To further investigate the deficiencies, the health department said it needed to interview all the doctors who practice at the clinic. The two doctors who are Planned Parenthood employees agreed to the interviews — but others, who were medical residents affiliated with a St. Louis hospital, did not do so.

The clinic was threatened with closure at the end of May, when its license was scheduled to expire and the health department declined to renew it. But a judge issued a preliminary injunction allowing the clinic to stay open.

Since then, the case has been referred to the state’s Administrative Hearing Commission, which handles disputes between state agencies and private individuals or groups. The commission will hold all-day hearings in the case this Monday through Friday.

It’s not clear when the commission will issue a decision, but the process could take months, Gilmore said.

Planned Parenthood says the state’s goal is simple: shut the clinic down

Throughout the process, the state has maintained that there are safety issues at the clinic. According to the statement issued by the health department in June, officials are “concerned by the refusal of physicians to provide explanations for the deeply troubling instances of patient care and conduct under investigation.”

Details about the department’s concerns have been difficult to obtain — the statement of deficiencies was not made public. But a conference call between state officials and anti-abortion activists in May suggests that the state wanted to investigate “failed” abortions, in which a patient remained pregnant, and the number of ambulance visits to the clinic, according to the Kansas City Star.

Planned Parenthood, meanwhile, says the concerns about patient care are essentially a ruse, and the state’s real goal is simply to shut down the clinic. “The state of Missouri has waged political theater in order to ban abortion,” Gilmore said.

The organization points to the May conference call between Steele Shippy, then-communications director for Missouri Gov. Mike Parson, a Republican, and Republican legislators and anti-abortion activists. The email invitation to the call ended with the phrase “#shutthemdown,” the Kansas City Star reported.

On the call, Shippy said that media would ask whether the state’s goal was to shut the clinic down. “While some of us, yes, it’s a main goal, but it also should be our main goal to protect the health and safety of women,” Shippy said.

The governor’s office declined to comment to Vox for this story. Shippy, who is now Parson’s campaign manager in his reelection campaign, has said that the call was nor arranged by the governor’s office. He is scheduled to testify at the hearings this week.

Ahead of the hearings, Planned Parenthood said the stakes could not be higher. Even with the clinic open, “there’s over a million women” of reproductive age “in the state of Missouri with one freestanding health center providing abortion care,” Eisenberg said. If the clinic no longer provides abortions, any of those people facing an unwanted pregnancy would have to go to another state for care.

The majority of people seeking abortions in America are low-income, which means that traveling added distances can be a real financial hardship, especially if it means extra time off work. Last week, Planned Parenthood opened a new clinic just across the Mississippi River from St. Louis, in Illinois, which could see Missourians if the Missouri clinic cannot. But other neighboring states, like Iowa, Kentucky, and Kansas, are restricting abortion access, not expanding it.

Meanwhile, the battle with state regulators is already having an effect, according to Eisenberg. “There’s a lot of confusion,” he said. “People think that abortion’s no longer available, when it is.”

And the outcome of the hearing will have implications outside Missouri too. In the last year, states around the country have passed strict bans on abortion. A Missouri law, for example, bans the procedure at eight weeks into pregnancy, with no exceptions for rape or incest. But all these laws, including Missouri’s, have been blocked by courts.

Another, quieter movement against abortion, however, may be coming to fruition. Since 2010, states have been passing restrictions on abortion clinics and providers that have had the effect of shutting clinics down. A 2016 Supreme Court decision, Whole Woman’s Health v. Hellerstedt, found several such restrictions in Texas unconstitutional and struck a major blow to them nationwide. But since then, President Trump has appointed two conservative justices, Brett Kavanaugh and Neil Gorsuch, to the court.

And earlier this month, the court announced it would hear the case June Medical Services v. Gee, which concerns a law in Louisiana very similar to those at issue in Whole Woman’s Health. Many abortion-rights advocates fear that the court will rule in favor of Louisiana, essentially giving states a green light to pass more and more onerous restrictions on clinics until abortion is impossible to access, even if it’s not banned outright.

The conflict in Missouri right now is about health department regulation and inspections, not laws. But, Gilmore said, the situation is still similar to the one in Louisiana — officials are “using the regulatory process under the guise of health and safety” to try to stamp out abortion in the state.

If the clinic does stop providing abortions, it will likely be seen as a sign by advocates on both sides of the issue that the strategy of restricting or regulating abortion out of existence is working.

That could have the effect of keeping doctors from entering the field of abortion care, Eisenberg said, exacerbating an existing shortage of abortion doctors in many places. Faced with increasing restrictions, they may feel that “this is ridiculous, I’m going to go find something else to do where the government’s not going to get in my way,” he said.

But, he said, the situation in Missouri should also galvanize activism around abortion rights: “for anyone who cares about the rights of people who can become pregnant in this country, now is the time to get up and fight back.”

Vox Sentences: Hope for a US-Taliban peace deal
Biden says Sanders’s response to his supporters’ online attacks is not “sufficient”
A Democratic senator tried to get Brett Kavanaugh to commit to an FBI investigation. He would not.
Alexandria Ocasio-Cortez’s powerful speech against misogyny in Congress was long overdue
Kimberly Guilfoyle’s speech encapsulated the Fox News feel of the RNC’s first night
As He Questions His Opponent’s Health, Trump Finds His Own Under Scrutiny - The New York Times