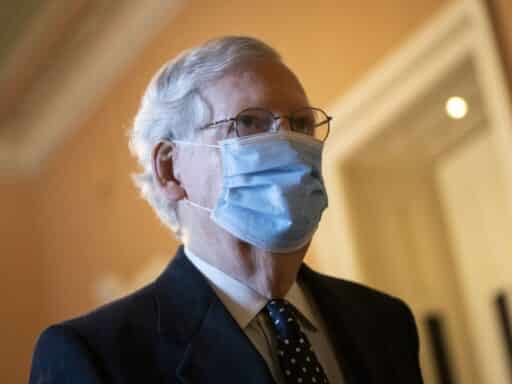 Trump could be impeached for a second time this week — but he might not be tried until he’s out of office.

Any impeachment proceedings would begin in the House of Representatives, but should the House vote to impeach, as it likely would due to its Democratic majority, action would then move to the Senate for a trial.

According to the memo, which was obtained by the Washington Post, a Senate impeachment trial would likely begin no sooner than the week after next, on January 19 (a Tuesday) — which means a trial could overlap with President-elect Joe Biden’s inauguration on January 20, and conclude only after Trump is no longer president.

The reason for that delay, according to the memo, is that the chamber is currently on recess — and that recess cannot be concluded early without unanimous consent from the Senate.

Such an early return is vanishingly unlikely, as it would require all 100 senators — including Trump loyalists like Sens. Ted Cruz and Josh Hawley, both of whom stuck by their plan Wednesday to object to Biden electors even after a pro-Trump mob stormed the US Capitol — to agree to resume regular session early.

The memo also notes that it is “unclear” whether Chief Justice John Roberts — who is constitutionally required to preside over the Senate impeachment trial of a president — would still be required to do so once Trump is out of office.

However, while some of the exact rules are unclear, overall, there is nothing stopping the trial from going forward once Trump leaves office, and as Vox’s Ian Millhiser has explained, conviction could still bar him from holding elected office again.

As of Saturday, it appears the McConnell memo will become relevant in short order. House Democrats are set to introduce an article of impeachment as soon as Monday, and the process is expected to move quickly from there.

The single article — which has been shared in draft form by some Democratic lawmakers — charges Trump with “incitement of insurrection” for his role in whipping up the violent mob that stormed the US Capitol on Wednesday, temporarily delaying the certification of electoral votes, and leaving at least five people dead.

According to the article of impeachment drafted by Reps. Ted Lieu, David Cicilline, and Jamie Raskin: “President Trump gravely endangered the security of the United States and its institutions of government. He threatened the integrity of the democratic system, interfered with the peaceful transition of power, and imperiled a coordinate branch of government.”

And as Vox’s Aaron Rupar has detailed, there is a clear line between Trump’s speech to supporters Wednesday and the subsequent Capitol attack.

“You’ll never take back our country with weakness,” Trump said Wednesday, shortly before the riot. “You have to show strength. You have to be strong.”

If the article of impeachment is introduced Monday as is thought likely, it would come to a floor vote quickly, bypassing portions of the usual process.

The Judiciary Committee has not yet been constituted for the 117th Congress, so an impeachment resolution would go directly to the floor under what’s known as a “privileged resolution.”

And from there, it would require only a simple majority of votes — again, in a chamber where Democrats hold the majority — to impeach Trump for a second time, kicking off the Senate process detailed by McConnell.

Democrats have worries about a slow trial

Some Democrats, however, have argued that McConnell’s timeline is a deliberate slow-rolling of the impeachment process.

In a Friday interview with MSNBC’s Rachel Maddow, Rep. Adam Schiff — the lead House impeachment manager during Trump’s prior impeachment — dismissed the memo as being “written for public consumption.”

“Mitch McConnell is the master of the Senate rules, for well or for ill — and it has been for ill,” Schiff said Friday. “Here he is saying essentially he will drag this out. If Mitch McConnell wants to move with expedition, he knows how to do it. And if he doesn’t, then he will bear the responsibility for whatever dangerous acts this president commits.”

Rep. Schiff on potential McConnell foot-dragging on Trump impeachment: “If Mitch McConnell wants to move with expedition, he knows how to do it. And if he doesn’t, then he will bear the responsibility for whatever dangerous acts this president commits.” pic.twitter.com/mgegUa4FZz

But while McConnell’s tenure as majority leader is about to come to an end after Democrats won two Senate seats in Georgia this week — tipping the balance of the chamber to 50-50 once Sens.-elect Jon Ossoff and Raphael Warnock are sworn in — he will retain the title until at least January 20, when Vice President-elect Kamala Harris becomes the tie-breaking vote, replacing Vice President Mike Pence.

And some Democrats believe the trial process could stymie the earliest days of the incoming Biden administration. An impeachment trial takes automatic precedence over other business on the Senate floor until its conclusion, and thus could push back Senate confirmation of Biden’s Cabinet after he takes office.

“We have to put our government together quickly — that’s the most important thing we should do,” he said, according to the Washington Post. “We don’t need any more political theater.”

Biden, for his part, has declined to weigh in on whether he believes Trump should again be impeached.

“That’s a decision for the Congress to make,” he said Friday.

It’s unclear whether Trump would be convicted by the Senate

Whatever schedule a potential Senate trial happens on, it’s unclear whether there are enough votes to actually convict Trump. A two-thirds vote — 67 members — is required to convict, and only a few Republican senators have expressed openness to even consider doing so.

“If they come together and have a process,” Nebraska Sen. Ben Sasse said Friday, “I will definitely consider whatever articles they might move, because as I told you I believe the president has disregarded his oath of office.”

One senator who has been more explicit in her thinking is Alaska Sen. Lisa Murkowski — she has called for Trump to resign outright.

“I want him to resign,” she told the Anchorage Daily News Friday. “I want him out. He has caused enough damage.”

In February, when the Senate voted on conviction after Trump’s first impeachment trial, only one Republican voted to convict: Utah Sen. Mitt Romney. Now, however, Romney has yet to signal support for impeachment, saying, “I think we’ve got to just hold our breath” until Biden becomes president.

Trump was ultimately acquitted during his first Senate trial.

However, the Senate will likely be voting as jurors again soon. Slow trial proceedings or no, Cook Political Report editor Dave Wasserman told Vox Friday that “every Democrat is already on board pretty much.”

“We cannot heal our country if we just ignore what happened on Wednesday. This was an insurrection and attempted coup where multiple people died,” says Rep. Ted Lieu.

“That’s why we have to do impeachment,” he tells @woilfblitzer. pic.twitter.com/lHGw0sLVKo

“We cannot heal our country if we just ignore what happened on Wednesday,” California Rep. Ted Lieu said Friday. “This was an insurrection and attempted coup where multiple people died.”

Doctors botch blood pressure readings more often than you think
Saudi women are now legally able to drive. But women’s rights activists aren’t the ones getting cred...
Why movies about public servants are so soothing in 2020
Facebook deleted a Trump post that falsely claimed the flu can be more deadly than Covid-19
“This is not normal”: Cory Booker calls out Republicans rushing Amy Coney Barrett’s Supreme Court he...
Bill Gates is spending $150 million to try to make a coronavirus vaccine as cheap as $3