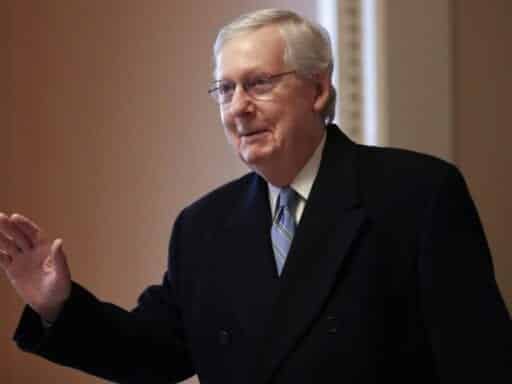 McConnell wants to kill the impeachment case dead. But first, he needs the votes.

Make no mistake, the Senate intends to kill House Democrats’ impeachment case — but senators are still trying to figure out the exact time and cause of death.

That’s the task Majority Leader Mitch McConnell is trying to accomplish. And it’s already proving to be a bit trickier than many expected.

The Senate did not, in fact, hold a quick vote on a motion to dismiss the charges against President Trump, as Trump urged. That could have cut off the trial immediately and showcased rock-solid Republican support for Trump. But Senate Republicans let it be known that they didn’t have the votes for a motion to dismiss — so the idea was dropped, guaranteeing the trial will last at least a week.

On Tuesday, there was another minor hiccup. McConnell had claimed for a week that he had the votes necessary to pass his plan for how the first phase of the trial would proceed. But he ended up having to make handwritten changes to that plan the day after he released it (spreading opening arguments over more days with fewer hours each day, and letting the House’s evidence be admitted by default unless there are objections).

And all this has been a prelude to the biggest showdown: the Senate’s decision on whether to subpoena new witnesses or documents for testimony. So far, on this topic, McConnell has punted. Though he’s privately made clear he wants a short trial with no witnesses, his initial trial plan didn’t resolve the issue one way or the other, instead saving it for later, after opening arguments and questioning from senators has wrapped up.

To be clear: The trial’s overall outcome does not appear to be in question. Sixty-seven senators must vote to convict Trump to remove him from office. Since there are only 47 Democrats, that would entail at least 20 Republican senators voting to remove a Republican president from office. McConnell is confident this will end in a not guilty verdict. “There’s no chance the president will be removed from office,” he said on Fox News last month. But all of the votes until that final verdict need a majority to pass, so McConnell can’t afford to lose more than three of his Republican senators.

So he’s still trying to figure out the best plan to get to that predetermined outcome — one that enough of the more independent-minded senators in his conference can stomach, that would shield his vulnerable members from too many ugly choices, and that would avoid infuriating the president.

The tricky balance McConnell is trying to strike

Even as far as hardened political operators go, McConnell stands out for his cynicism and calculation. It’s widely taken for granted that matters of principle aren’t weighing on him here. Did you think the Senate would stand up for the rule of law? That it would exercise Congress’s institutional role in checking executive branch wrongdoing? That it would work hard to ensure the next election is fair? What are you, a sucker?

Instead, McConnell is all about winning — for his party, and for his Senate majority. For him, the impeachment trial is a problem to be managed, in such a way that it does little damage to the GOP this November.

Conviction is, of course, a nonstarter. It’s widely believed in the GOP that ousting Trump from office would tear the party apart, due to his continued popularity among Republican voters. McConnell himself quite likes having Trump as president — he called 2017 “the best year” of his career for conservatives. And the vast majority of the Republican senators McConnell leads have become enthusiastic supporters of Trump, at least in public. (Sen. Rand Paul estimated Wednesday that about 45 of the 53 Republican senators would currently back a motion to dismiss the impeachment charges.)

That last point is important because, like any congressional leader, McConnell must follow his members to an extent. It’s not as though if Republicans had a different Senate leader, they’d run a legitimate trial. This was always going to be mainly about protecting Trump — because that’s what the vast majority of GOP senators want to do and think it’s in their interest to do.

Still, McConnell has his own interests to take care of as well, and they don’t necessarily coincide with Trump’s preferences on every detail.

First, practically, to line up the 51 votes to end the trial, McConnell has to satisfy a small group of GOP senators who don’t want things to look like a total sham. This group includes Sens. Susan Collins (ME), Mitt Romney (UT), Lisa Murkowski (AK), and the retiring Lamar Alexander (TN).

Rather than arm-twisting, McConnell’s job here entails lots of temperature-taking, hand-holding, cajoling, and bargaining. And according to CNN’s Lauren Fox, he has been working closely with staffers from these senators’ offices on trial-related matters. If you’re wondering why McConnell keeps emphasizing the importance of following precedents from Bill Clinton’s trial in 1999, it’s because that framing appeals to these key senators. If you’re wondering why they all backed McConnell’s trial plan, it’s because they had a key role in shaping it.

Second, McConnell very much wants to remain Senate majority leader. (Before he gained that title in 2015, he spent eight long years as minority leader, and he would prefer not to repeat that experience.) So he wants to handle things in such a way that the GOP doesn’t pay a price at the polls this fall.

And the Senate is in play in 2020, with Republican Sens. Collins, Cory Gardner (CO), Martha McSally (AZ), and Thom Tillis (NC) all representing swing states. There are also two seats up in Georgia, Sen. Joni Ernst in Iowa, and an open seat in Kansas, among others. In contrast, Democrats only appear to have two vulnerable seats: those of Sens. Doug Jones (AL) and Gary Peters (MI). If Democrats win the presidency, they need a net gain of three seats to control the Senate; if Trump is reelected, they need four.

Many of these Republicans facing potentially tough races have been staunch Trump defenders, including as McSally, Tillis, and Ernst. Still, McConnell is thinking about how the optics of the trial could affect their races and the GOP’s fortunes overall. CNN also reported that in addition to McConnell not having the votes for a motion to dismiss, he didn’t personally favor it, because he “was keenly aware” of what it “would look like politically.” He wants to shield his vulnerable members from ugly situations that could hurt them.

Yet he also clearly thinks he has to avoid a bitter break with Trump. Having a few Republican senators go out on a limb and side with Democrats on witnesses — and invite Trump’s fury — would be a disaster for McConnell, who needs those senators to keep his majority.

That’s why, on December 12, McConnell appeared on Fox News and announced that he was coordinating “everything” he does on impeachment with the White House counsel. “There will be no difference between the president’s position and our position as to how to handle this,” he said. He was trying to keep Trump happy. The problem is, saying all that made the trial look more like a sham.

The witness issue is a particularly thorny one. Polls regularly show that sizable majorities of respondents support calling witnesses at the impeachment trial. And for the few GOP senators who do want to signal that they’re taking this seriously, a vote to end the trial without witnesses will be tough to explain. (Especially if they plan to vote to acquit Trump in the end.)

So already, Collins has said she’ll “likely” support calling witnesses, and Romney has said he wants to hear from at least former National Security Adviser John Bolton. If they follow through, McConnell can only afford to lose two more votes.

But though few Republicans say this out loud, it seems highly likely that more witnesses or documents would just make President Trump look worse — and would hurt the Republican Party more politically.

McConnell, then, is pressing his case to wavering Republicans that calling witnesses would be a mistake. He clearly didn’t have the votes to rule out witnesses altogether at the beginning of the trial — but his hope is that after the opening arguments and senator questioning, the key Republican senators will conclude they’ve heard enough and it’s time to bring things to a close.

Additionally, McConnell increasingly appears to be relying on the argument that because Trump could assert executive privilege to try to block testimony from his former aides, calling witnesses would just bog things down in the courts with no end in sight. That is: It sounds nice, but in practice it would be a disaster.

We don’t yet know whether McConnell will succeed. However, Politico’s Burgess Everett and John Bresnahan suggest that if enough Republicans do want witnesses, McConnell will likely get a heads up to adjust his plans and try to work something out. That makes a lot of sense, since it would avoid the scenario where a few of the Republicans that he needs for his majority have an open falling-out with Trump. He wants to shield his members.

McConnell got to where he is by understanding the consummate power of partisanship in the modern Senate. And he stayed where he is — despite Tea Party challenges, despite the downfall of House leaders John Boehner and Eric Cantor, despite the rise of Trump — because he understands how to navigate the competing currents within the Republican Party.

Now he’s trying to arrange the speedy exoneration of a president accused of high crimes and misdemeanors while trying to shield his senators from the political fallout, to the extent that’s possible. If anyone can do it, he can.

Sign up for the Sentences newsletter. No shouting. No alerts. No BS. Get the news that matters, in one email at the end of the day.

A looming shutdown deadline hasn’t changed the central conflict: the wall
4 winners and 6 losers from Game of Thrones’ disappointing “The Last of the Starks”
50 Cent, Oprah, and the silencing of Black women survivors
The reason we’re talking about a government shutdown yet again, briefly explained
The $124 billion Supreme Court case that could throw the housing market into turmoil, explained
Protesters tore down a statue in the former capital of the Confederacy. More may follow.