Mitt Romney is now just like every other Republican: he’s with Trump for the tax cuts 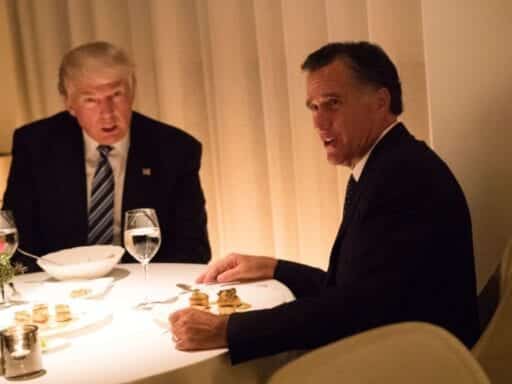 Romney says he will only rebuke Trump if “it is a matter of substantial significance.”

Mitt Romney, the once fierce Trump critic running for Utah Senate, is trying to clarify the all-important question in the 2018 midterm elections: Does he stand with President Donald Trump or against him?

“I will support the president’s policies when I believe they are in the best interest of Utah and the nation,” Romney wrote in an op-ed for the Salt Lake City Tribune.

He continues: “I have and will continue to speak out when the president says or does something which is divisive, racist, sexist, anti-immigrant, dishonest or destructive to democratic institutions. I do not make this a daily commentary; I express contrary views only when I believe it is a matter of substantial significance.”

In other words, Romney supports Trump’s agenda — except when it’s really really, bad, and then he will say something.

Romney says he is frequently asked where he stands on Trump. The former Republican presidential nominee has become somewhat of a confusing figure in the Republican Party in the age of Trump. He’s been on the record calling Trump a “con man,” a bully and a “fake” — warning that his brand of politics has “led other nations into the abyss.”

But since Trump’s inauguration, he has tempered his criticism, and even become supportive of Trump’s agenda. He says he’s more of a “hawk” on immigration than the president, who has recently taken issue with giving undocumented immigrants due process when crossing the US border. He even shared a friendly meal with the president when he was under consideration for secretary of state.

Romney’s explanation for his shift on Trump shows the president’s stronghold on the party. Romney is adopting the same mindset many traditional congressional Republicans and conservatives have settled in under Trump. Meaning, as long as Trump will sign conservative policies, from tax cuts to an aggressive deregulatory agenda, and nominate conservative judges, all the other stuff — the explicit racism, demagoguery, and destruction of democratic norms — can fall to the wayside.

Romney is making the same calculation most Republican lawmakers have made

We’ve seen Republicans make this calculation over and over again.

At the start of Trump’s presidency, congressional Republicans, with control of both chambers of Congress and the White House, set forward an ambitious agenda. They would repeal and replace Obamacare in mere months, pass a major budget deal, confirm conservative judicial nominees and enact massive tax cuts. Executing that agenda meant turning a blind eye to everything else. And they say it was worth it.

When House Speaker Paul Ryan, who was once much more outspoken on Trump’s racist, sexist, and xenophobic rhetoric, announced his retirement from Congress, he said he was “grateful” for Trump. Why? It was worth it for the tax cuts they were able to pass.

“I’m grateful for the president for giving us this opportunity to get the country on the right track,” Ryan said at the press conference announcing his departure. “The fact that he gave us the ability to get this stuff done makes me proud of the accomplishments that I’ve been a contributor to. It makes me satisfied that I’ve made a big difference and he’s given us that chance, and I’m grateful to him for that, and that’s really how I see it.”

Most recently, Trump tweeted a bold-faced lie about a recent visit with congressional Republicans, falsely claiming lawmakers cheered when the president made fun of Rep. Mark Sanford (R-SC). (The room actually fell silent when Trump mentioned Sanford, several Republican lawmakers in the room confirmed.) Still, a conservative Trump critic who lost his primary for reelection this month found a way to excuse the president’s behavior.

“This president has done so many good things for this country, and to take that instance, as unfortunate as it is, [doesn’t] look at the positives that he has done,” Rep. Ralph Norman (R-SC) said in response to Trump’s lie.

Romney is doing the same. He said “the first year of his administration has exceeded” his expectations. He was happy that Trump’s trade agenda is less severe than originally discussed on the campaign trail. (Although he is not happy with the proposed tariffs on US allies.)

And of course, there’s a political explanation to this calculation. Going against Trump is a losing electoral strategy. As Vox’s Kay Steiger writes, Republicans most willing to speak out against Trump are also those most on the ropes with the Republican voter base.