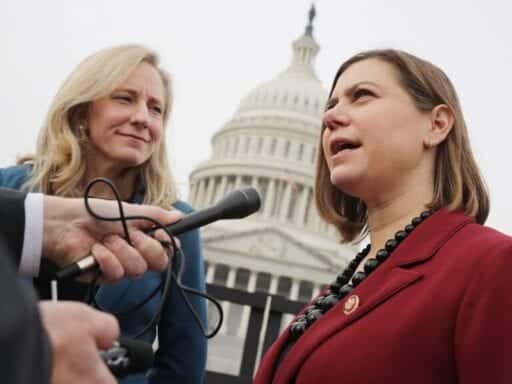 “This is not something that you can do based on polls:” Moderate Democrats are wading into unknown electoral territory after impeachment.

Ahead of the House vote on impeachment, the 31 moderate Democrats who won seats in Trump districts face a difficult problem: explaining this vote to the cross-over Republican constituents who helped elect them in 2018.

Staring down this tough political reality a year out from their reelections, they say they’re planning to vote their conscience.

“To be honest with you, if this was a political calculation, then I wouldn’t have come out for the inquiry and I wouldn’t be voting ‘yes’ on articles,” first-term Rep. Elissa Slotkin (D-MI) told reporters. “This is not something that you can do based on polls.”

This has the only likely defectors — Rep. Jeff Van Drew of New Jersey, longtime Minnesota Rep. Collin Peterson, and first-term Rep. Jared Golden of Maine, who’s voting for one article, but not the other — out on a lonely impeachment island. Van Drew’s handling of this decision was so polarizing he is switching to the Republican Party, a change he’s expected to announce this week.

And while it’s perfectly normal for a handful of vulnerable lawmakers to defect from a party’s stance, there’s remarkably little sympathy in the Democratic caucus for Van Drew, a moderate from New Jersey’s Second Congressional District.

After coming out against impeachment in recent weeks, Van Drew quickly lost the support of regional Democrats, and privately signaled his intention to become a Republican this weekend rather than face a potentially tough primary and general election.

“He doesn’t have any chance to win as a Democrat or a Republican,” Pascrell said. “Politics is not where the wind blows. You’re in the wrong place if you think that’s what you’re all about.”

Van Drew’s so-called “frontline” colleagues in tough districts seem to agree. Almost all other moderate first-term Democrats have clearly come out for the articles of impeachment, even though some are well aware it could cost them their seat come November 2020.

“I know this might cost me my job, and that’s exactly why I did it,” Rep. Dean Phillips (D-MN) told Vox Tuesday. “I never imagined three years ago I’d be in this position, for gosh sakes. I can rest comfortably, and I’m not sure that can be said for all 433 members of this body right now.”

To be sure, making the tough choice to impeach Trump — even if it is a principled stance — also helps these Democrats avoid Van Drew’s fate: having their base abandon them or facing a tough primary before a difficult general election.

“He didn’t go into this thinking his vote on impeachment would cost him the support of his party. … That turned out to be wrong,” said Cook Political Report House editor Dave Wasserman. “Other Democrats in similar districts are well aware a vote against impeachment could cost them more allies than could win them new friends.”

At this point, impeachment is a “no-win situation” for Democrats in Trump districts, Wasserman told Vox.

“They have no choice at this point but to hold hands and jump.”

Still, it’s worth noting that no one knows exactly how impeachment will play out in the polls in 2020, with multiple lawmakers citing this point as even more reason to vote on their principles.

As Rep. Tom Malinowski (D-NJ) told Vox, “Nobody here knows what the political impact will be and anybody who says they know is fooling themselves.”

The 2018 midterms were a wave election for Democrats; the party picked up seats in 31 particularly tough, redder districts that voted for Trump in 2016. It’s important to remember some of these districts are more conservative than others.

Van Drew’s New Jersey district, which covers a chunk of southern New Jersey and encompasses Atlantic City, is very conservative (Cook rated it R+8 ahead of the 2018 election). Van Drew won the open district last year in part because he was a former state legislator who was known for working with Republicans, and his Republican challenger had faced allegations of racism.

Peterson, the longtime Minnesota moderate, represents a conservative and agriculture-heavy part of his state. He’s held onto his seat so long in part because he’s known for bucking the Democratic Party. And even though Jared Golden’s Maine district voted reliably Democratic in presidential elections from 1992 to 2012, it went for Trump by 10 points in 2016. In other words, Democrats in all these districts will need to court the support of 2016 Trump voters in order to be reelected to the House in 2020. That could make a yes vote on impeachment particularly tricky.

“Democrats in Trump-won districts, particularly ones that he won by more than a few points, are likely going to need some crossover support from at least a handful of Trump voters next fall,” says Kyle Kondik, managing editor of Sabato’s Crystal Ball. “At the same time, almost all House Democrats, even those in competitive seats, are backing impeachment, in part because they probably think it’s the right thing to do and, politically, because they probably think opposition would cost them with their own base voters.”

Even among vulnerable Democrats in a tight spot, Van Drew’s decision to switch parties stands out. Peterson, the other moderate expected to vote against the articles, comes from a district Cook rates R+12 but marks reliably Democratic because the Congress member has held onto his seat for 15 terms. Peterson has also been approached by Republicans about switching parties, but he said he has no intention to do so.

“I said I was going to wait until I see everything and I haven’t seen everything yet,” he told reporters on impeachment, adding that his stance has been driven by his opposition to the “process.”

Moderate Democrats attempting to thread the needle on this subject overwhelmingly said their decisions are driven by the need to hold the president accountable.

“To me, this was outside of thinking about politics, it was really about ensuring I’m doing what I think is right for the country,” Rep. Mikie Sherrill (D-NJ) said. “I think what I’m hearing most [from constituents] is ‘I just want you to approach this with integrity, to be thoughtful about it.’”

Seven moderate first-term representatives known for their national security backgrounds, including Sherrill, first indicated that they were open to impeachment when they came out in favor of an inquiry via a Washington Post op-ed earlier this year. All representatives of battleground districts in 2018, they characterized the impeachment process as a Constitutional duty.

“We have sworn oaths to defend the Constitution of the United States many times over,” they wrote. “Now, we join as a unified group to uphold that oath as we enter uncharted waters and face unprecedented allegations against President Trump.”

And even as moderate lawmakers have had to juggle feedback from voters who oppose impeachment, an array of protests on Tuesday night also highlighted just how much support there is from others in favor of the process. These demonstrations underscored the many competing constituencies House members are continuing to navigate with their vote on Wednesday.

Pelosi has made moves to protect her caucus

Speaker Nancy Pelosi has taken several steps to protect her more vulnerable members since the impeachment inquiry got underway this fall.

Throughout December, she’s focused on advancing bipartisan legislation including a spending package, which could help provide many Democrats some cover when they return to their districts. Although this approach has been criticized for its potential to give Trump a win, it offers moderate Democrats in particular the ability to say they’ve made progress on legislation including a massive trade agreement and a landmark bill to reduce prescription drug prices, while they make moves on impeachment.

“For many of these folks, they want to go home and demonstrate that they can legislate and vote to impeach the president as well,” said Jim Manley, a Democratic strategist and staffer under former Senate Minority Leader Harry Reid.

Malinowski said he’s confident the voters in his district are paying attention to the work that’s being done on policy in addition to impeachment. House Democrats have passed close to 400 bills this year alone, the vast majority of which are sitting untouched in the Senate.

“As long as the Democratic majority in the House is delivering on those issues, I’m confident voters in my district will not only tolerate but strongly support our determination to defend the rule of law,” Malinowski told Vox Tuesday. “I don’t know how this plays politically in the end, but I would not want to be someone in New Jersey politics running and defending the president’s misconduct and arguing we should give control of the House back to the people who screwed my state.”

The thing is, we don’t know how voters will react in 2020

For some time, House Democrats resisted any talk of impeachment because they were concerned it would hurt moderate members’ chances of reelection. Since this fall, however, the caucus has more fully embraced an inquiry and now a vote on the articles. It remains uncertain, though, how all of this will play out at the ballot box.

Despite the surveys that have been released about the impeachment inquiry, we really don’t know how voters will react in 2020. A FiveThirtyEight polling average shows that roughly 47 percent of Americans support impeaching the president while roughly the same proportion of voters do not.

Polling included in an internal October memo from the Democratic Congressional Campaign Committee (DCCC) found the margins of support for lawmakers backing impeachment to be tight in battleground districts. However, the closeness of these margins could also speak to how much opposition toward Trump has grown since the start of his presidency. Democrats will certainly put a lot of resources towards protecting their majority — and beyond running on their bipartisan accomplishments, they’ll hammer that impeachment was not a rushed decision, and that it was based on facts.

“I think the greatest protection all members will have is that they vote their conviction in the constitution, not their politics,” House Majority Leader Steny Hoyer told Vox. “Republicans are going to pursue this as a political issue, they’ve made it about process ad nauseam, because they don’t want to talk about the facts.”

Also on the minds of lawmakers is the fact that polling only offers a snapshot of where voters currently stand on the subject, and that their views could change before next November. For some voters, too, impeachment may not wind up being the driving issue of their House vote. And even if the impeachment process fires up the Republican base, it’s very possible it could have a similar effect on the Democratic one, too.

As Rep. Cheri Bustos, the head of the DCCC, told reporters — there’s still plenty of time ahead of the election for Congress to work on other priorities, and for voters to make up their minds.

“In the end, you’ve got to be able to live with yourself,” Bustos said. “We’ve got 11 months until the election and that’s at least 11 political lifetimes away. There will be many important votes between now and then.”

What’s more, the electoral results following the past impeachment of President Bill Clinton don’t necessarily spell disaster for Democrats. After Clinton was impeached by the House in 1998, Republicans — who held the majority in the lower chamber — managed to keep it in the election that followed in 2000. In both 1998 and 2000, the GOP lost a number of House seats, but were still able to maintain a narrow edge on the Democrats.

It’s certainly possible that House Democrats are able to pull off the same this time around. Until the results are in, lawmakers say they’re sticking to their principles.