Money Talks: The family that’s been to Disney dozens of times 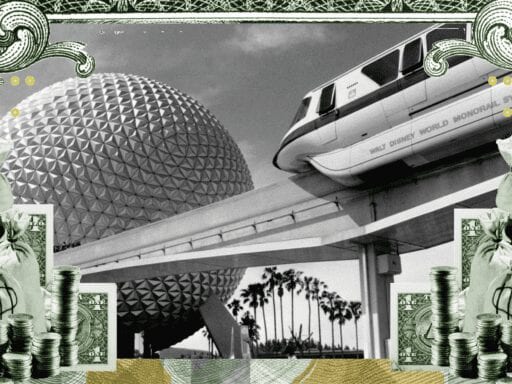 How Rocio and Lenise make their 3-year-old twins’ (and their own) Disney dreams come true on a budget.

Walt Disney World is poised as a once-in-a-lifetime visit for most families, but for others, it’s home base. With new rides opening, seasonal food abounding, and hotels debuting constantly, there’s always a reason to return — and if you’re a fan, it can be a slippery slope toward becoming wholly obsessed.

Rocio de la O Peña, her wife Lenise Kryk, and their twin 3-year-old sons are wholly obsessed. Hooked on the utopian glee of a Disney vacation, the couple has spent the past few years eschewing a single blowout trip in favor of feeling that Happiest Place on Earth glow as often as possible. They go for the rides, entertainment, nighttime shows and attractions that are generally included with their admission, but there’s plenty of merchandise, seasonal food, and add-ons to splurge for as well.

“Going to Disney” isn’t always synonymous with the California and Florida theme parks. The company operates a cruise line, a Hawaiian resort, and even something called the Disney Vacation Club, a time-share program that offers part-ownership in Disney hotels and the possibility of visiting international resorts like Disneyland Paris and Tokyo.

Rocio and Lenise do all of this — and more. Based in Las Vegas, the family of four visited Walt Disney World and Disneyland, took a Disney Cruise, traveled to Disneyland Paris, and even joined Disney Vacation Club in the past two years, all without breaking the bank. Rocio, who works part-time for an autism treatment assistant program, and Lenise, the clinical director of an agency that provides in-home behavioral services for autistic children and teenagers, make it work on a low-six-figure salary by way of setting their own rules, snapping up a deal when they see it, and eating a lot of cold-cut sandwiches.

With Disney vacations as the ultimate financial priority — and yet another international theme park, Tokyo Disneyland, on the horizon for 2021 — here’s how they make it work.

The following conversation has been condensed and edited for clarity.

Rocio: Because we were Florida residents [until recently], we got our Florida Weekday Select annual passes in 2018. We were able to take both 2018 and 2019 Walt Disney World trips with those annual passes. It cost $690 for both of us, and the boys were free. [Children age 3 and under do not need to pay admission for Walt Disney World and Disneyland parks.]

Lenise: Their birthday is March 3rd, so we went mid-February to celebrate their 2nd birthday. The twins had a free flight there; not needing tickets for them has been a saver.

Rocio: The last two years we’ve been to Walt Disney World one time each year. We stayed with the same friends both times, on property because of their Disney Vacation Club, so we didn’t have to pay for a hotel.

Lenise: We’ve never done a Disney Dining Plan, [which allows you to pay for your meals in advance.] We eat 80 percent of our food that we bring with us, and it’s actually pretty doable for four of us. When we stayed at Old Key West — it was a huge two-bedroom apartment kind of deal — we went to the grocery store on the way up.

We typically buy food for breakfast if we stay somewhere on property — yogurt, some waffles for the kids — and then we pack sandwiches, fruit, and a lot of snacks. It’s kinda like when you go to the movie theatre, you just want to eat all day. When you walk by churros, pretzels, and cookies all day long, you gotta have a replacement. We’ve got a cooler that fits really nice with the stroller; we’ve got it all dialed out. It’s an extra bag and a cooler, that’s really all it ends up being. And then we buy one meal in the park.

Rocio: On the 2019 Walt Disney World trip, I was able to book all four of us for $510 on Frontier Airlines to Orlando International Airport

Lenise: Rocio is amazing, I don’t know how she finds the flight deals she finds. Sometimes we’ll fly into Ft. Lauderdale or Miami and then rent a car and make our way up the coast to Orlando.

Rocio: We don’t call them vacations, we call them trips. Vacation is when you relax.

Lenise: Traveling with children is a trip. I work with kids with autism — I’m a behavioral interventionist, so dealing with behaviors and shaping behaviors is what I do every day. It’s like a lifestyle; it’s not one of those things you can just turn on and turn off. They are, you know, not angels of course — they’re 3 — but I think we’ve been pretty consistent with rules and expectations, so I think that helps. Souvenirs can be very expensive — I’ll get Disney–branded Pez dispensers or random other Disney trinkets we find [at home] to put in the stroller and randomly give to [the kids] like, “Here’s a Disney treat!” They could care less if it’s from Disney World or not, and that definitely saves quite a bit of money.

Rocio: We don’t have passes to Disneyland or Disney World right now. We didn’t renew because we were going to go from two to four passes [because the kids got older]. We knew we wanted to do a Disney Cruise and visit Tokyo Disneyland in 2021, so we put that as a priority. We didn’t want to deal with the crowds of Star Wars: Galaxy’s Edge opening, so we figured it was a good year to take a break.

Lenise: If anyone gets us a gift, it’s Disney gift cards. We save the Christmas ones and use those for the treat or toy [the kids] pick out that day. And Starbucks gift cards — I know it seems really silly, but when we’re driving to Disneyland or even at Walt Disney World, we save those to have our breakfast there.

If people give you cash, you’re going to spend it on stuff. If they give you Disney gift cards, there’s no option but to spend it at Disney. Target has Disney gift cards, and if you have a Target card or RedCard, you get 5 percent off. A friend has a RedCard, and when we have a bigger trip, [they’ll lend it to us to] buy Disney gift cards. It keeps us within our budget if I know how much is on that gift card. If I just use a credit card, I’ll forget how much I’m spending.

Rocio: We literally think about things so much.

Lenise: This is the only way that we can actually do it. I think our friends either think we’re just like multi-millionaires because we go to Disney so much, but the ones who come with us end up going, “Okay, I get it.” We know what we want and we’re willing to sacrifice certain things.

Rocio: The rule for Disneyland is [to stay in] walking distance from the park and get free parking. That’s my priority when I’m looking at hotels. Usually I do HotelTonight or Hotels.com because they have the best deals. I never book in advance; I always book two nights before or the day of, because most of the time we have stayed walking distance to Disneyland for less than $100. If we can squeeze free breakfast, that’s amazing, but if not, we bring it.

Lenise: We max out our time in Disneyland for sure; we start early and we stay late. There’s a CVS right by there too, so it’s still cheaper to go get lunch meat and bread and stuff, but a lot of times, since we’re driving in, we just bring everything we need and make sure the place has a fridge. I’d rather go 30 times in the year and save money with sandwiches than just go one time.

Rocio: In Disneyland, I have to go to Ghiradelli once a trip to get the Nob Hob Chill shake with a shot of espresso ($10). Ghirardelli does not take Disney gift cards, so this treat always comes out of our spending money.

Lenise: The Disneyland corn dogs are definitely a splurge for me. I always like the apple pie caramel apple ($11.99). I can’t make those and carrying that would be a nightmare.

Rocio: We did the seven-night Very Merry Christmas Cruise in November 2019 on the Disney Fantasy. We booked it through Costco because when you book from them, you get 5 percent back if you use the Costco credit card and $250 Costco cash, so that definitely brings the cost down.

Lenise: The trip, before those rebates, was $5,200. I knew I wanted to do a Disney cruise for my 40th birthday, that was no question … but we did it in November because we got three extra days and Christmas theming for almost the same price it would have cost us in April. We got our Santa pictures there, we got our family Christmas card pictures there, so all-in, not too bad.

Rocio: We had a goal for last year for our savings, and we knew that we were going to spend this money next year anyway, so we compromised and said okay, we’re going to take that from our savings now, but next year, we have to meet our goal.

Lenise: We joined Disney Vacation Club this past November while we were on a Disney cruise. We’ve gone and done the spiel probably three times; we know the benefits and we kick ourselves in the butt for not getting it earlier. Whenever we looked it up before, we were looking at a $500-a-month payment and I was like, “I can’t, that’s just too much, I’m gonna have a hard time sleeping at night for the next 10 years.” So, [for a smaller investment with fewer “points” that can be used to book rooms] we pay $250 a month and the down payment was $4,300.

Rocio: We do have to pay property taxes each year, but the fee was waived because Disney’s Riviera Resort, the property we bought into, wasn’t yet open at the time.

Rocio: We even brought our popcorn bucket [on the cruise] so we could get $1 popcorn refills. We tried to save.

Lenise: We actually borrowed it from our friends in Florida, took it there and gave it back to them.

Sign up for The Goods’ newsletter and we’ll send you the best Goods stories exploring what we buy, why we buy it, and why it matters.

Apple won’t take a cut — for now — when Facebook sells online classes
Let’s check in on Trump’s plan to bring drive-through testing to a drugstore near you
Code Media 2019: News & updates
China hits back at the US with tariffs on $75 billion in goods
What Google searches tell us about our coronavirus thoughts and fears
Jeff Sessions is pushing asylum officers to reject more migrants. Will they go along?