More people have already voted in Texas than did in 2016 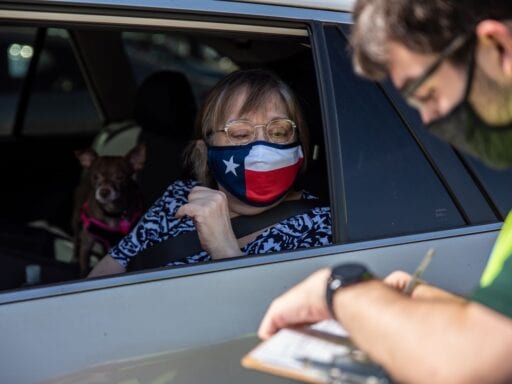 Share
Loading...
A poll worker helps a voter at a mail in ballot drop off location on October 13, 2020 in Austin, Texas. | Sergio Flores/Getty Images

Texas has historically had among the lowest levels of voter turnout nationwide.

With one day of early voting left, more people have now cast ballots in the presidential election in Texas, a once reliably red state with historically low levels of turnout, than they did in the 2016 general election overall.

Texas is the first state to surpass its 2016 vote totals, leading the country in turnout among young voters in particular. In 2016, 8,969,336 Texans cast their ballots, but by Friday morning, more than 9 million had done so, according to the Associated Press.

It’s a surprising result in a state where Republican officials have sought to make it harder to vote this year despite the challenges presented by the pandemic. While many states have allowed all voters to submit their ballots by mail, Texas has prohibited anyone but people who are 65 or older, disabled, out of their home county, or in jail from doing so. Texans who have Covid-19 on Election Day even need to present a certified doctor’s note in order to vote by mail.

Republicans have also limited the number of ballot drop-off locations to just one per county, banned counties from sending mail-in ballots applications to all registered voters, sought to curtail drive-thru voting and challenged the extension of the early voting period by six days.

The record-level turnout is a testament to the efforts of grassroots organizers in the state, from the Texas Organizing Project to MOVE Texas, who have been working for years to register more voters and encourage them to turn out.

It’s not clear whether the surge in turnout this year will favor Democrats or Republicans since voters don’t register by party affiliation in Texas. It won’t become clear until the state starts counting ballots.

But the polls would suggest that turnout could give Democrats an edge: the candidates are neck and neck, according to FiveThirtyEight’s polling average, whereas Trump won the state by 9 points in 2016.

Texas has a long history of voter suppression

Texas has historically low turnout, especially among Hispanic voters. In 2016, only 51% of registered voters showed up at the polls, the fifth-worst turnout among all states. That’s been a major obstacle to Democratic hopes of flipping the state.

Democrat Beto O’Rourke, who ran for Senate in Texas in 2018, has often said that Texas isn’t a red state, but rather a “nonvoting state.” Turnout among eligible voters jumped significantly in 2018, spurred largely by enthusiasm for O’Rourke’s campaign to unseat Cruz, but it was still almost 4 points behind the national average, putting Texas ahead of just 10 states. In 2014, under a third of eligible voters cast a ballot.

History shows that this dismal turnout is by design.

As soon as post-Civil War Reconstruction began, the Texas state government, like many other former Confederate states, sought to disenfranchise Black and Mexican American voters in the form of a poll tax and Jim Crow laws imposing racial segregation, which persisted through the 1950s.

In 1923, the legislature instituted “white primaries” for the Democratic Party, the controlling party at the time, that excluded Black voters — a practice that the US Supreme Court finally struck down more than two decades later. And in yet another attempt to keep Black voters off the rolls, the legislature enacted a law in 1966 requiring voters to register to vote annually, which remained in effect until 1971.

Modern voter suppression in Texas has taken the form of racial gerrymandering (at times by both Democrats and Republicans). Most recently, Republicans were accused of diluting the power of nonwhite voters with their plans to redraw congressional districts in 2003 and 2011, spurring protracted legal battles. The redistricting process next year, which will begin after the results of the 2020 census comes in, will likely be similarly contentious.

Texas has also adopted the nation’s strictest voter ID law and began closing polling sites in the wake of the Supreme Court’s 2013 decision in Shelby County v. Holder. That decision vacated a key provision in the Voting Rights Act that had required that jurisdictions with a history of discriminatory voting practices, including Texas, get the federal government’s approval before changing their election rules.

Within hours of the decision, Texas implemented a law substantially restricting the kind of identification documents voters were required to present at the polls in order to cast a ballot. Some 600,000 registered voters in the state were estimated to lack acceptable ID under the law, which lower courts had previously prevented from going into effect on the grounds that it could discriminate against African American and Latino voters.

The state also started closing polling sites in a way that disadvantaged minority voters. Texas has closed about 750 polling sites since 2012, including 542 sites in 50 counties where African American and Latino populations have significantly grown in recent years. That led to long wait times at some polling sites in predominantly Black and Latino neighborhoods during the Democratic primaries earlier this year.

“That shit is not accidental,” O’Rourke told Vox in August. “Republicans have been really good at shrouding this racist voter suppression by saying, ‘That’s just the way shit happens in Texas,’ and it isn’t the way that they designed it to happen.”

The Senate still doesn’t know when it will vote on the coronavirus bill
A way-too-early look at which 2020 Democratic contenders are overrated
How the British royal family makes its money
President Trump’s checks repaying Michael Cohen for hush money, explained
Trump calls for law enforcement at the polls, prompting cries of voter intimidation
Elizabeth Warren raised five times as much money from Big Tech as Joe Biden did