More than 20 are dead in a catastrophic California boat fire 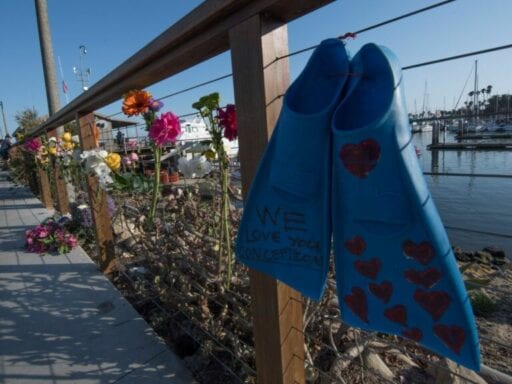 Share
Loading...
The memorial wall dedicated to the victims of the Conception, a boat that burned and sank off the Santa Cruz islands on Monday morning. | MARK RALSTON/AFP/Getty Images

In the early hours of Monday, September 2, a commercial dive boat called the Conception carrying 39 passengers on a scuba diving trip caught fire off the coast of Santa Cruz Island. At least 25 people are dead and nine are missing, according to the US Coast Guard; search efforts were suspended as of Tuesday morning. Twenty bodies have been recovered from the wreckage so far, officials said.

The first mayday call came in to the Coast Guard at 3:15 am. Five surviving crew members reportedly leaped off the deck to escape the fire and scrambled to a fishing boat anchored about 200 yards away for help. A sixth crew member is among those missing.

More than 30 passengers were sleeping on the bottom deck of the ship when the fire broke out; floor plans of the Conception show that there are two staircases leading up to the galley, one from the sleeping quarters and the second from the shower room.

Two helicopter crews and boats were dispatched to the Conception after the Coast Guard received the mayday call, and Santa Barbara’s and Ventura County’s fire departments also came to the scene. The boat sank at around 7:20 am and is lying inverted on the ocean floor, officials said. Efforts are being made to create a “salvage plan” to stabilize the boat so divers from the Coast Guard can search for and retrieve victims, according to Coast Guard Captain Monica Rochester.

California officials have expressed condolences and concern over the tragedy. Senator Dianne Feinstein (D-Calif.) declared her support for an interagency investigation in a statement, writing: “We need to know whether all applicable safety regulations were being followed and whether additional regulations need to be applied, particularly regulations concerning boats that accommodate overnight passengers.”

Before disaster struck, the Conception, a 75-foot vessel built in 1981, was on a three-day scuba diving trip and was in compliance with Coast Guard regulations. The boat was operated by Truth Aquatics, a Santa Barbara-based company that leads diving expeditions and trips in California’s Channel Islands.

It was part of a fleet “custom designed specifically for diving,” according to the company site. At capacity, it could hold a maximum of 46 passengers, with 13 double bunk beds and 20 single bunks in a single room packed below deck. The company mostly received top-notch reviews on TripAdvisor and Yelp prior to the accident, with people who identified themselves as experienced divers praising its services and staff.

What we don’t yet know

Federal and local agencies are still investigating the cause of the fire. Victims have not been publicly identified, nor is there a confirmed final number of survivors. Still, when asked by a reporter at a press conference Tuesday morning if it’s assumed that the remaining 34 passengers did not make it out of the vessel, Coast Guard Captain Rochester said, “That would be the correct assumption.”

Several people who have dived with the company have updated their Yelp reviews, writing condolences to those onboard the Conception. “It’s too early to call a cause and there isn’t enough information out there to make a conclusion,” wrote one reviewer. Grieving Twitter posts expressed how shocked the close-knit diving community is that such a tragedy could happen on a reputable vessel.

As a diver I am deeply saddened to see this happen, this should not have happened. Friends of mine who had dived off that boat are shocked. The diving community is very close.

Mauricio Munoz, a Bay Area diver who has taken trips on the Conception, told ABC News that the boat’s two exits are easy to access and well-lit at night. He added that the staff is professional and has always conducted orientations at the start of its trips. Dave Reid and Terry Schuller, a couple who runs an underwater camera manufacturing business and have traveled with Truth Aquatics, told the AP that the boats are “always immaculate” and that the crew are careful about safety.

Still processing this. My friends could’ve been on this boat. Hell, if I still lived in California, it could’ve been me. This crew is one of the best in the industry. https://t.co/BiJ3qufFNo

Gary Pilecki, a California diver whose club has previously worked with Truth Aquatics, told the Guardian that fires are “the last thing on my mind on those boats,” and that divers are more concerned about decompression sickness or strong currents.

At Tuesday’s press conference, officials emphasized their commitment to understanding the cause of the fire, which is pending investigation by the National Transportation Safety Board and local law enforcement. County Sheriff Bill Brown said, “We’ll do everything in our power to find out what happened aboard that vessel in the last moments of these family members’ lives.”

China is systematically detaining Uighurs — and the world isn’t doing enough about it
No one knows why these Covid-19 patients’ symptoms keep relapsing
Trump judge lashes out at a transgender litigant in a surprisingly cruel opinion
Democrats call Trump’s coronavirus relief orders “paltry” and “absurdly unconstitutional”
A Gates-funded program meant to keep low-income students pushed them out instead
Right-wing media thrives on Facebook. Whether it rules is more complicated.