More than 200 tornadoes devastated the Midwest over 13 days. Why? 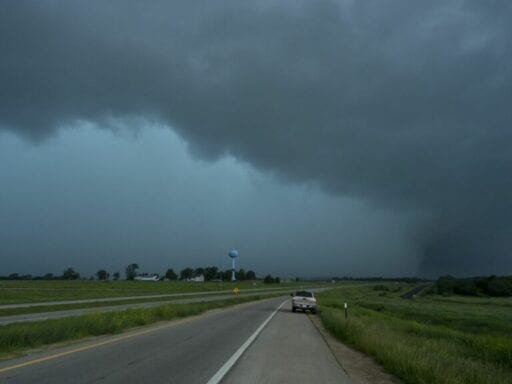 The spike in tornado activity this week, explained.

Tornadoes have been tearing up huge swaths of the United States this week, leaving death and devastation in their wake. On Monday alone, about 55 tornadoes may have touched down, and at least 27 tornadoes were reported Tuesday. That made Tuesday the 12th consecutive day with at least eight reported tornadoes, beating the record set in 1980. The Washington Post reported Wednesday that 225 tornadoes have been confirmed since May 17.

Idaho, Colorado, Texas, Oklahoma, Kansas, Missouri, Ohio, Indiana, and Pennsylvania all saw massive twisters touch down over the past several days. Several people were killed, dozens injured, and hundreds of homes were destroyed. Walls of some buildings were ripped off, making them look like dollhouses.

Some of the most severe damage was reported near Dayton, Ohio on Monday, where repair crews had to use snowplows to clear debris. Tuesday evening, a mile-wide tornado landed near Lawrence, Kansas, about 40 miles west of Kansas City. It injured at least 12 people and damaged around 30 houses.

Looking at the velocity data, inbound velocity ~80mph and outbound ~50mph would put estimated winds around 130mph within this tornado pic.twitter.com/WfMLxYbJKI

While it’s not unusual to have tornadoes several days in a row during tornado season in late spring and early summer, the sheer number this spring stands out.

“We haven’t seen a pattern this productive and that remained so productive for many, many years,” said Anton Seimon, a research assistant professor at Appalachian State University who studies thunderstorms and tornadoes.

Researchers say several factors brewing for weeks converged to lead to such a prolific outbreak of tornadoes, but they’re rooted in a weather pattern that originated halfway around the globe more than a month ago. And at least one scientist saw it coming.

A tornado is a rapidly rotating air column that reaches from clouds on down to the ground. They’re a common phenomenon in some parts of the United States, emerging from strong thunderstorms.

In the US, clusters of tornadoes like the ones we’ve seen this week are fueled by warm, moist air coming from the Gulf of Mexico east of the Rocky Mountains, Seimon said. In places like Florida, the energy embedded in that moisture is dissipated in the form of frequent but relatively weak thunderstorms.

However, over the central United States, that energy can build up. In the spring months of March and April, there is a temperature gradient between the cooler northern parts of the United States and the warmer southern regions.

This gradient normally weakens by the end of May as the northern part of the country heats up. But if that gradient remains steep, as it has this year, it leads to an unusually strong jet stream, the narrow, fast-moving air current circling the planet at high altitudes.

A strong jet stream is instrumental in creating the conditions that promote strong, rotating thunderstorms called supercells. These are the least common but most violent type of thunderstorm. And they act as a vent for all that pent-up energy in the atmosphere and spawn tornadoes like the ones we’ve seen this week.

This scientist saw this spate of tornadoes coming

Hints that huge numbers of tornadoes would crop up this week started to emerge more than a month ago, according to Victor Gensini, a professor of meteorology at Northern Illinois University.

The key signal that tornadoes were coming in the US is a phenomenon known as the Madden-Julian oscillation. Similar to El Niño, it’s a periodic swing in temperature and moisture. But unlike El Niño, the MJO originates over the Indian Ocean rather than the Pacific Ocean, it varies on a week-to-week scale rather than over the course of years, and the pattern moves eastward rather than staying put.

“Our atmosphere is a fluid,” explained Gensini. “Imagine somebody is in a pool over in the Indian Ocean bouncing up and down with a raft. That sends waves out across the Pacific Ocean in the form of the jet stream. A few weeks later, those waves arrive in North America and produce these severe weather regimes.”

This year, Gensini’s research team saw a significant increase in activity over the Indian Ocean. Such a strong signal isn’t common, but it allowed his team to create a forecast of opportunity that projected high likelihood of tornado activity in late May.

“Around April 20, we started noticing a big swell up of convection, or thunderstorm activity, in the Indian Ocean,” Gensini said. “When you begin to see that, there are reasons to believe that the pattern in the United States for severe weather will start to favor tornadoes and hailstorms.”

He even discussed some of his findings in early May in an internet forum for storm chasers. “I think the [Northern Hemisphere] pattern is coming together for a pretty outstanding May for severe convective storms in the US (especially in comparison to the last few years!),” he wrote on May 1. “Should this turn into an active MJO and propagate across the Maritime Continent, it would have mouth watering for the back half of May.”

These kinds of predictions are part of an emerging field in meteorology known as sub-seasonal forecasting, and Gensini’s latest work has impressed other scientists. “I’m in awe of the skill represented,” Seimon said of Gensini’s tornado predictions. “He called it.”

But such strong warnings don’t always crop up, so it’s difficult to make similar predictions for every kind of tornado.

For now, forecasters expect that the storm system generated by the latest MJO is on its way out. “Things are going to quiet down as the jet stream begins to weaken and shift further north into Canada,” Gensini said. “We seem to be through the worst of it.”

But much of the US is still in tornado season, and supercells aren’t the only things that make tornadoes. “Many, many tornadoes come out of many configurations of the atmosphere,” Seimon said. That means other kinds of smaller storm systems can still generate tornadoes.

Storm damages are getting worse, but climate change isn’t too much of a factor

Climate change might play a role in tornadoes, but right now there isn’t a signal that rising average temperatures affected the number or severity of the recent storms.

That’s not to say there aren’t long-term shifts underway. In a paper published in the journal Nature last year, Gensini showed that the United States’ Tornado Alley — the region spanning South Dakota, Nebraska, Kansas, Oklahoma, and Texas notorious for tornadoes — is shifting east. “The trends in tornado activity in places like the Midwest and the mid-South are increasing and they’re decreasing in places like the central Great Plains,” he said.

The destruction left in the wake of these tornadoes is also on the rise. “Our cities are growing larger and we have more and more exposure and vulnerability to certain severe weather,” Gensini said. “Basically, we’re putting more assets on the ground, more targets for tornadoes to hit.”

For people in vulnerable areas, Gensini said the best thing to do might be to establish strong building codes and phase out weak-framed structures that are easily blown apart.

Game of Thrones’ showrunners won’t be directing Star Wars after all
The fall equinox is Monday: 9 things to know about the first day of autumn
Trump has been the biggest source of Covid-19 misinformation, study finds
A progressive vision to make America great
A lawyer for Michael Jackson’s estate responds to disturbing Leaving Neverland documentary allegatio...
The past 24 hours in Trump impeachment inquiry news, explained